A selection of interviews and recordings conducted across South Asia which supplement the separate categories of Partition Voices, Kashmir Voices and Communist Voices and separately posted radio features and documentaries..
​

I interviewed Appapillai Amirthalingam, the leader of the Tamil United Liberation Front, in Colombo in July 1986, at the conclusion of two weeks of talks between his party - then based in Madras - and the Sri Lankan government. The main issue was the prospect of devolving power to the Tamil-dominated north and east of the island.

​Mr Amirthalingam was assassinated in Colombo three years later by the Tamil Tigers.

RSS activists celebrating the unbanning of the organisation, 1993
​

In June 1993, six months almost to the day after the demolition of the Babri Masjid at Ayodhya, the ban on the RSS - the parent organisation of the Hindutva movement - was lifted. I went round to the RSS's Delhi HQ and managed to record activists chanting in celebration of the lifting of the restrictions. It's a short clip - about thirty seconds - but powerful.

Recordings of songs, chants and music at a sit-in protest against the Narmada dam organised by the Narmada Bachao Andolan in central Bombay in June 1993 - most of the protestors were adivasis, and groups of young advivasi women danced to some of the music and song

Medha Patkar, a founder of the Narmada Bachao Andolan and its figurehead, was on a public hunger strike at the same protest in Bombay at which the music was recorded. In this interview she spoke of her campaign's determination to stop the planned submergence of villages in Gujarat and Maharashtra.

I recorded these songs in the village of Nadiawiani in the Jahanabad district of Bihar. The photograph below was taken in the same village at the same time. 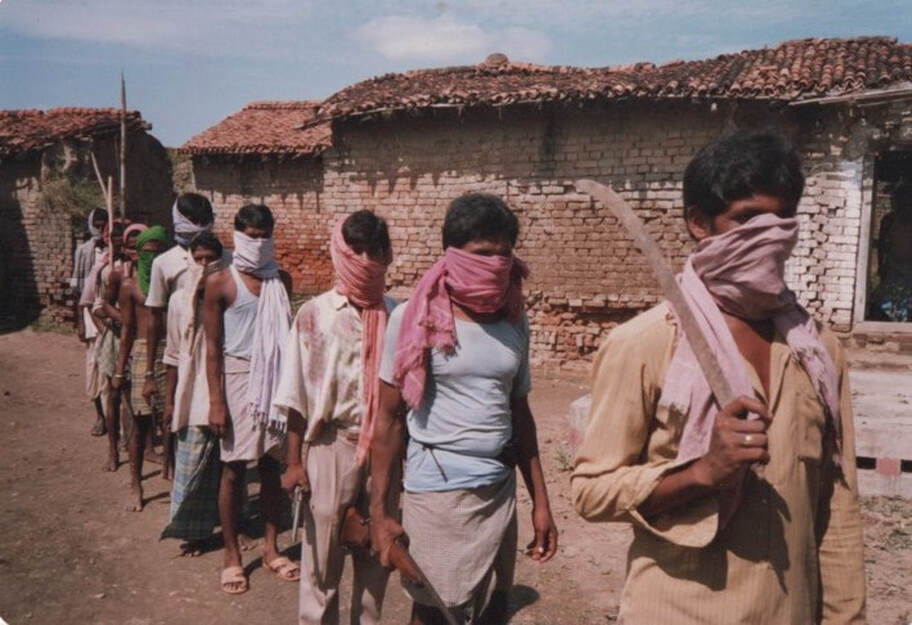 George Fernandes (1930-2019) was at the time of this interview a leader of the Janata Dal, which was the governing party in the North Indian state of Bihar. He was a prominent socialist and trade unionist and opponent of Indira Gandhi's Emergency. Later he became India's defence minister in a BJP-led government. In this interview he describes Naxalites as 'the salt of the earth, the 'bravest of the brave and 'the best human material' that India has - though he makes clear his disapproval of violence.

In November 1993, I covered the election campaign in the Indian state of Mizoram in one of the more remote corners of the north-east of the country. A secessionist insurgency there led by the Mizo National Front ended with a peace agreement in 1986. In 1993, the MNF were a political party contesting elections - this song was recorded at their headquarters in the state capital. Aizawl.

On the same trip to Mizoram in north-east India in November 1993, I recorded this women's choir at a church in Aizawl, the state capital. The choir was rehearsing for the gospel centenary celebrations the following year.

One of the more remarkable sights when I lived in Nizamuddin in Delhi was the appearance of an old man who was an itinerant seller of musical instruments which, I imagine, he had made himself. They were more basic than the one pictured above -a bit of clay, wood and wire with a very simple bow. I bought one and - in January 1994 - recorded the seller as he played his instrument, which was his aural calling card as he sought to drum up business.

My eye-witness account of being stuck in the middle of a serious riot in central Delhi. It was on 5 April 1994 when thousands of these attending a Communist-organised anti-GATT protest tried to get through police lines to stage a rally at the Boat Club in defiance of prohibitory orders. Several hundred rounds of tear gas were fired - I still have one of the canisters.

Lakshmi Sehgal (1914-2012) was the head of the Rani of Jhansi Regiment, the women's wing of the wartime Indian National Army led by Netaji Subhas Chandra Bose. This interview took place in Delhi on 13 April 1994 -  on the 75th anniversary of the Jallianwala Bagh massacre and the 50th anniversary of the raising of the INA flag on Indian soil, in what is now Manipur. It covers her reflections on and memories of Netaji and of the INA.

Sheel Bhadra Yajee (1906-1996) first met Subhas Chandra Bose at a Congress gathering in Calcutta in 1928 and became his follower and co-worker. During the Second World War, he travelled secretly by submarine to meet Netaji in Singapore. After the war, he became a leader of the Forward Bloc and oversaw its amalgamation with Congress. He was talking in Delhi on 17 January 1994.

Atal Bihari Vajpayee (1924-2018) was India's first BJP prime minister and - with L.K. Advani - presided over the the BJP's development from a fringe movement to a party of government. I first interviewed him in Baroda in 1994 when he was attending a meeting of the BJP's national council. I also interviewed him during his very brief first term as prime minister in May 1996. I haven't found that audio but I have come across a recording of Vajpayee's address to the nation as prime minister on 19th May 1996. It's in English - he spoke earlier in the same broadcast in Hindi - and the audio was dubbed from a feed and is slightly distorted though it's clear what he's saying.

I recorded this rendition of the 'Internationale' at the Calcutta home of Kankana and Mandira Bhattacharjee. They both sang the song and Kankan also played a type of harmonium. He was the music secretary in Calcutta of the Communist-aligned Indian People's Theatre Association which at the time had more than 6,000 members in West Bengal.

This rather cacophonous sound is that of dozens of young novitiate Buddhist monks each individually chanting - it was recorded in April 1995 at one of Ladakh's principal monasteries, at Thikse outside Leh and overlooking the Indus river.

It was still cold in Ladakh in April when I visited but it was the start of the brief season for agriculture and on the outskirts of Leh I came across a ploughman chanting in the crisp spring air as he led his two yoked cattle  (the photo above is not mine, by the way). Quite an atmospheric sound.

One of my most memorable assignments was to report on the Sidi community, Indians of African origin, in the western state of Gujarat. The TV feature that I put together is on YouTube. Sidis sing and dance both to make a living and as part of their religious observance. They are Muslims. In Junagadh, Sidi women sang in tribute to their 'hazrat' or saint Bava Gor, whose shrine is in Gujarat. The photo of a Sidi woman and her child was one I took in the Sidi village of Jambur, also in Gujarat, on the same trip.

Suhail Shaheen was the acting ambassador to Pakistan of Afghanistan's Taliban government at the time I interviewed him in October 2001. This was in the aftermath of 9/11 and the American offensive against Afghanistan was getting underway. Shaheen forecast that the Americans would face another Vietnam in Afghanistan. It would be a 'very very long war - American will not be able to exit'. Even if Kabul fell to the Americans and their Northern Alliance allies, the fight would simply 'enter another phase' with the Taliban taking to guerilla conflict.

Shaheen later became the spokesman for the Taliban's political office in Qatar.
​

Hafiz Mohammad Saeed, amir of Lashkar-e-Taiba, addressed a mass rally in Islamabad a few weeks after 9/11, as the Americans were beginning their offensive against Taliban-ruled Afghanistan. I was one of only two western journalists allowed to attend the rally, and I had the chance to talk briefly to Saeed. He refused to criticise Osama bin Laden and said his supporters 'will fight for Islam against America'.