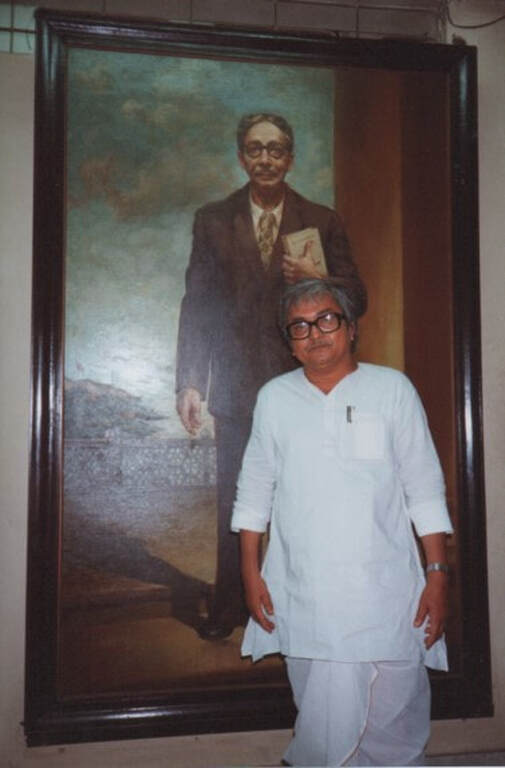 India's new coalition government has been welcoming on board some new members. For the first time since the country gained independence in 1947, Communists have taken ministerial office. Andrew Whitehead, our Delhi correspondent made a series of radio programmes a few years ago about the fate of Communist parties in different parts of the world. He looks now at the upturn in fortunes of parties which then seemed to be slipping into irrelevance:

Indrajit Gupta has always given the impression that he's fed up with the brawling and name-calling which too often passes for politics in India. He's in his late seventies and has been a Member of Parliament for half his life. Much admired for his oratory and integrity, he was a few years ago named India's Parliamentarian of the year.

The hound-dog expression and bags under his rather bleary eyes tell a story of long hours spent in dreary meetings, longer hours in unwinnable debates. A face reflecting, perhaps, aspirations unmet and dreams unrealised. After all, India's longest-serving MP has never been part of the winning team.

Until last Friday. That was the day when the Cambridge-educated Mr Gupta was sworn in as the new home affairs minister. Not simply a personal triumph. But a landmark for the world's biggest democracy. Indrajit Gupta is the first Communist ever to serve in an Indian cabinet.

His party, the CPI, didn't do too well in the recent general election. It won just thirteen seats. But it's emerged as one of the key constituents in India's left-of-centre governing alliance.

The country's bigger Communist party, the more dogmatic CPM, is supporting the coalition government, but not taking office. If that quintessentially Communist institution, the CPM's Central Committee, had displayed a little bit more political flexibility and agreed to enter government, then - without a doubt - one of its leaders, Jyoti Basu, would now be his country's prime minister.

India's Communists have managed to survive the end of the cold war, the collapse of Soviet Communism, and the discrediting of much of the ideology they have spent a political lifetime proclaiming. And they are not alone.

The radio series I made four years ago was entitled: 'What's Left of Communism'. "Not a lot" was the general view at that time. The programmes looked at four Communist parties - in Cuba, India, Italy and South Africa. Few imagined that Fidel Castro's Communist enclave in the Caribbean could survive long without its Soviet bloc patrons. But he's still there - as defiant as ever.

The other three Communist parties operate in pluralist democracies. All three had, back in 1992, big pockets of strength. All were in opposition at national level. And with the possible exception of the South African party, all appeared to be well past their prime.

Now - as of last Friday - Communist parties are in government in all four countries. The South Africans piggybacked to power with the help of the African National Congress - which would not have survived as such a formidable force through the wilderness years without its contingent of CP members. There are now four Communists in the Pretoria cabinet.

The Italian Communists had, four years ago, already unburdened themselves of much of their Marxist-Leninist baggage. They had changed their name - to the Party of the Democratic Lft. Now that party is the biggest force within the governing Olive Tree alliance. Giorgio Napolitano - for many years the most articulate spokesman of Eurocommunism, but representing a party that was always pipped at the post of Italian politics - is his country's interior minister.

Like Indrajit Gupta, Mr Napolitano has had to wait a long time to get a taste of power. Both men have had to come to terms with the demise and disgrace of many once cherished beliefs. Both consider that some remnants of the Communist experience have been worth saving.

What has disappeared, really without trace, is the internationalism. The parties are no longer bound to Moscow or Beijing. The bogey of a Communist menace stalking fragile democracies, trying to overwhelm what was once curiously called the free world, is no longer remotely credible.

Once, Indrajit Gupta was a courier for an outlawed Communist Party. Carrying round instructions for a party which was, briefly, bent on armed insurrection. Now, not even the most establishment-minded of India's politicians and commentators view Mr Gupta as a threat to anything more than the cant and corruption with which so many of the country's leaders surround themselves.