Andrew Whitehead
A Mission in Kashmir

A Mission in Kashmir 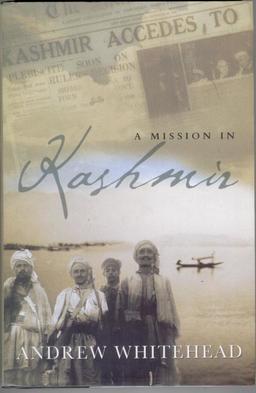 A Mission in Kashmir is published by Viking Penguin in Delhi.

It is an authoritative and vivid account of the origins of the Kashmir conflict - based on more than forty interviews with people who lived through the turmoil which gripped this princely state in the Himalayan foothills in the closing weeks of 1947.

I have also used official and other archives, contemporary news reports and secondary sources to tell the story of the political turbulence in Kashmir as India and Pakistan gained independence - the invasion of the princely state by an army of tribesmen from Pakistan - the hasty and eventually successful airlift of Indian troops into the Kashmir Valley - the coming to power of the Kashmiri nationalist, Sheikh Abdullah - and the often hidden Kashmiri perspective on events which heralded decades of conflict and instability.

The book is currently being sold by Amazon at a very competitive price. The full text is also available on line here. 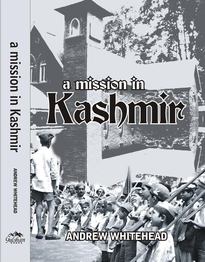 A Mission in Kashmir has been republished in May 2015 by Gulshan Books in Srinagar.

It's really exciting to have an edition of the book published in Kashmir, and I hope this will make it easier for Kashmiris to read and respond to the work and its arguments.

As you can see, the cover has a completely new design - the youngsters featured were members of the Bal Sena, the children's wing of the National Conference militia created in late 1947.

The text is unchanged apart from a very brief additional preface and a couple of minor corrections.
'A solidly researched and elegantly written account of the origins of a dispute which, sixty years down the line, is still unresolved. Its signal merit is that it takes the dispute away from the national myths and prejudices of India and Pakistan. Instead, the men and women of Kashmir are brought back to centre stage. ... A vivid, empathetic, and deeply moving book.'
Ramachandra Guha
author of India after Gandhi

'Andrew Whitehead ... has produced an original and beautifully rendered account of the origins of the Kashmir crisis in 1947. An extraordinary tour de force.'
Ashutosh Varshney
University of Michigan

'An engaging and fast-paced book that brings new insights to bear on the study of Kashmir in 1947 ... Andrew Whitehead's rigorous, analytical and well-researched book also performs that rare feat of being simultaneously gripping and accessible, and suggesting how a much-written history can be looked at afresh, and provide the basis for moving forward.'
Urvashi Butalia
author of The Other Side of Silence

'Andrew Whitehead belongs to that rare breed of journalist who leave no stone unturned to explore even the remotest aspects of a story ... thepainstaking investigative work and research that must have been put in to achieve the level of detail his book boats of can only be described as a labour of love.'
Zaffar Abbas
resident editor, Dawn

'Andrew Whitehead. with his long experience of South Asia, has written a fascinating and original account of the genesis of the Kashmir problem based on oral history, research and reportage.'
Sir Mark Tully

A Mission in Kashmir was published in Tamil in November 2011, with the title Kashmir: Mudhal Yudham.

The publisher is Kizhakku Pathippagam in Chennai, an imprint of New Horizon Media. The translation is by B.R. Mahadevan. ISBN:978-81-8493-206-5

I would be happy to consider proposals to publish A Mission in Kashmir in other languages - do please get in touch with me at <awkashmir@gmail.com>

''A Mission in Kashmir' ... is brilliant and moving, and is first-rate by the standards of both a journalist and a social historian'.
Amitabh Mattoo in 'India Today'

'Andrew Whitehead, with his long journalistic experience, has written a fascinating account of the gensis of the Kashmir problem. ... The author is a natural storyteller. But to say this is not to devalue his scholarly work based on a painstaking research, writings and personal interviews of those directly involved in the tragic events. The author narrates the story of this human tragedy with sensitivity, but without bias'
Ved Marwah in the 'Pioneer'

'a seminal book about the complex skein of politics, nationalist fervour and communal zealotry laced with a wider global dimension of the brewing mess, which dogged the early days of the Kashmir dispute'
Jawed Naqvi in 'Dawn'

'The importance of the book lies ... in its detailed, meticulous, and objective discussion of the events of 1947, which adds much to our knowledge about the causes and mechanics of the tribal invasion and serves to remove some of the confusion surrounding the political situation in Kashmir.
'The fact that the book explains this situation using the stories and memories of people who experienced this attack makes it all the more compelling. ... the violence described in the book against Muslims, Sikhs, Hindus and Christians alike, by the men in the tribal lashkar, adds a significant chapter to the historiography of the independence and partition of India, from which Kashmir is usually absent.'
Chitralekha Zutshi in 'Modern Asian Studies'

'Since Whitehead is as much a historian as he is a journalist, he uses both faculties to give an absorbing story of treachery, heroism, plunder, rape and murder that Kashmir witnessed during the fortnight when both India and Pakistan came to the brink of a war'
A.J. Philip in the 'Sunday Tribune'

'By his diligence and effort, and a great deal of empathy, Andrew Whitehead has filled in many important blanks in the Kashmir story. ... There have been many accounts of the terrible ordeal that the nuns and missionaries of the convent went through, but there is no account which provides a comprehensive view of not just the sequence of events and the atrocities, but of a human picture of both the victims and the perpetrators.'
Manoj Joshi in 'Biblio'

'recreates the heat and confusion of the battle from the inside by sourcing written accounts and tracking down eyewitnesses in both India and Pakistan. By doing so, he makes for a very vivid story, told from shifting points of view'
Chandrahas Choudhury in 'Mint'

'Integrity is ... the hallmark of Andrew Whitehead's work. ... He pursued people in the know, far and wide, and consulted the archives extensively'
A.G.  Noorani in 'Frontline'

''A Mission in Kashmir' is an attempt at a new way of writing on Kashmir. ... it critically examines sources and tries to use news discoveries to contest mainstream ideas on the accession, the raiders and the role of Pakistani regulars in the debacle ... Especially remarkable is the sensitivity reflected in the later part of the book, about the absence of Kashmiri Muslim voices in the representation of events in Kashmir'
Gowhar Fazili in 'Interventions'


And a personal communication from Raminder Bali in Canada, posted here with his permission:

I congratulate you on writing a very nice book on the 1947 raid of Kashmir. I also read the Father Shanks dairy that you have loaded on your website. I am the great grandson of Mr. Isheer Singh mentioned in the dairy and referred by Father Shanks as his friend.  My family has always told me that my great grandfather did not leave the house as mentioned in the dairy and we learned later that he was killed by the raiders.

Let me start with a bit of my background. After 1947 we build a new house on Court Road which is at a stone’s throw from the St Joseph’s school. I studied in the school and also was born in the hospital in 1964. Even my son was born in the same hospital in 1994. My grandfather was one of biggest contractors of Kashmir and his name was Gajinder Singh Bali. My father is an Architect and was one of the first person who did his Architectural degree from Manchester University (1955- 1960) and worked in London for few years before deciding to move to Baramulla in 1962 and retired from the government in 1994. I am a professional engineer and live in Canada with my family. I moved in 2001 after I got fed up with the militancy. I worked on the Uri Project (1990-1994) and later in N Delhi till my move to Canada. My parents still visit Kashmir for few months every year and I visited Kashmir last December after 10 years. We have had a great bond with the school and the hospital and my dad volunteered his time to design and supervise the church during its renovation in early 1970’s. My family has a great bond with the school and the hospital and these two institutions are also very dear to the people of Baramulla.

After reading the book I was able to relate to all the events that I have been hearing as a child from my parents and specially my grandmother who had lost at least 10 members of her family near Sopore. I believe your book is a great work based on scholarly research.  It is good to hear a different prospective from an outsider to the conflict rather than hearing it from one conflicting party because there is always an element of doubt due to various biases and in the process truth gets muddled.

I always wondered on the reconciliation process that followed after the raid and how Sikh community who had their families killed go back and settle in the villages. I believe that would not have been possible without the cooperation of the majority community and leadership of National Conference. There is hardly a Sikh family in Baramulla who did not lose one of their close family members during the raid. I also recognize few of the Bali family members that you interviewed in the book; they are my dad’s first cousins.