This is a piece I wrote for - and broadcast on - BBC radio's 'From Our Own Correspondent' - you can see all my FOOC  pieces here. AW 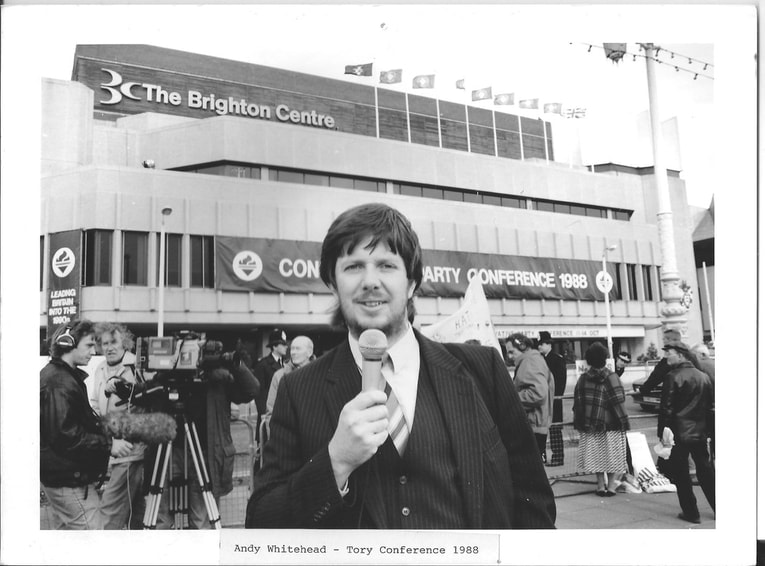 At the end of July British Members of Parliament embarked on the long summer break, not to return until mid-October. At the end of the Parliamentary year, Andrew Whitehead gives a flavour of what it is like to work at Westminster:

I work in a place called The Dungeon. A small room with latticed windows down a narrow stone spiral staircase. As Commons offices go, it is a little on the small side. Perhaps ten feet by eight. Two of us work there. And there's radio equipment, two tape machines and three computer terminals.

When I tell Members of Parliament how cramped the place is, I don't get a lot of sympathy. Honoured are the MPs who have an office to themselves. Some are squeezed three to a room in temporary buildings installed on the roof. Even less fortunate are those in the 'Cloisters', a bit like a dingy teacher's common room. Rows of desks, with little space and no privacy.

It's not just the office facilities which are a little antiquated. In the Members' cloakroom there's a ribbon on every coat-hook. That's where you hang your sword. The House of Commons doesn't actually get going until half-past-two in the afternoon. It's assumed that most MPs have outside jobs The main evening vote usually gomes at ten or after. And yes, most MPs are expected to stay. Not in the Commons listening to the debate. By mid-evening there are rarely more than thirty MPs in their places. Perhaps they're in their offices - if they have one - answering constituents' letters, or in one of the bars or restaurants whiling away the time until the division bell rings. The voting is not some sophisticated press-button system. MPs have to be counted through the "ayes" lobby or the "noes" lobby. It can take up to a quarter of an hour.

All this hanging around encourages what is the main pastime at Westminster: gossip. In the alcoves, the corridors, the tea rooms, the lifts - anywhere two people can pass on news of others' indiscretions. The whole place buzzes with intrigue. And there's no place quite so intriguing as the Members' Lobby. This is the area where MPs congregate as they enter and leave the Commons chamber. And here that privileged beast among Parliamentary journalists, the lobby correspondent, can loiter, accumulating gobbets of information and opinion.

Any conversation here is on 'lobby ' terms. You can report what was said, but not who said it. No finger prints. "The Cardinal rule of the Lobby", says the rule- book, "is never to identify the informant." As for briefings of the Lobby, the next page asserts: "Members are under an obligation to keep secret the fact that such meetings are held." And below in block capitals, we're warned: "Don't talk about lobby meetings before or after they're held."

That was written back in 1982, and since then things have relaxed a bit. I don't think I'll be excommunicated for telling you that twice a day - in the morning at Downing Street, and in the afternoon in a room high in the Commons tower - the Prime Minister's Press Secretary or his deputy gives off-the-record lobby briefings. Here we get the Prime Minister's eye view of the political landscape. "A crutch for crippled journalists", says the political editor of one of three national newspapers which have withdrawn from the lobby system. It's not quite so sinister as is sometimes made out. But it can be uncomfortably cosy

The other side of working at Westminster is sitting in the Press Gallery, looking down on the bear pit below, reporting what transpires. There's a great deal of theatre in the Commons. And now the television cameras are there, it's not just a matter of learning lines, but wardrobe and make-up as well.

The Commons, like the British court system, is adversarial. It's about combat not consensus. Government and opposition benches face each other. At Prime Minister's Question Time twice a week, Margaret Thatcher and Neil Kinnock are eyeball to eyeball.  The front benches are two swords' length apart. It makes for great drama, great tension, great excitement. But great government? I'll leave that for you to judge. 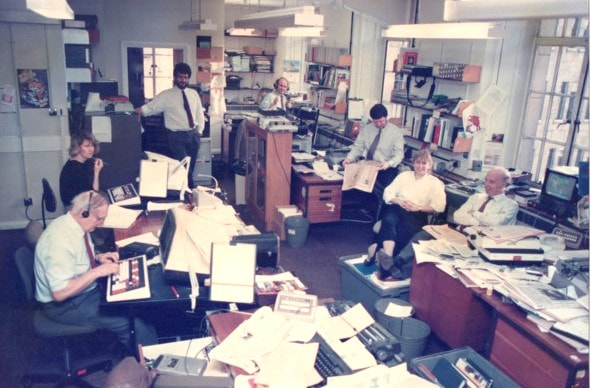 This marvellous photo from around 1990 is of the World Service Correspondents' Unit
at Bush House from the left - Harold Briley, Sue Williams, Adrian Foreman
William Reeve, Andrew Whitehead, Gail Styles and James Morgan