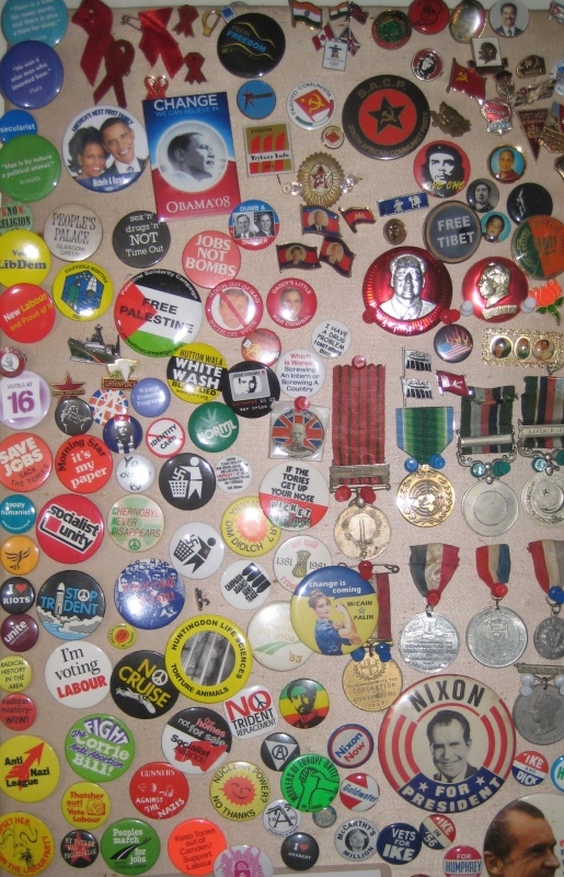 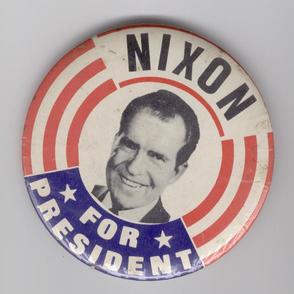 The political badge - the campaign button as it would be known in the U.S. - now feels almost as dated as the rosette. None of the major British parties make much use of them - though campaign groups still do. In the States it's different - the Obama campaign produced some tremendous images.

I will in time post here some of my favourite badges. I like this one because, though you can't tell from this image, it has the virtue of size - you could almost eat a sandwich off this Nixon button. It's difficult to know whetehr this badge dates from his first Presidential campaign in 1960, when he lost to John F. Kennedy, or his successful campaign eight years later. You should be able to judge from his appearance - but I wouldn't like to venture a firm opinion.

Nixon's political career ended in ignominy of course when 'Watergate' forced him to resign. 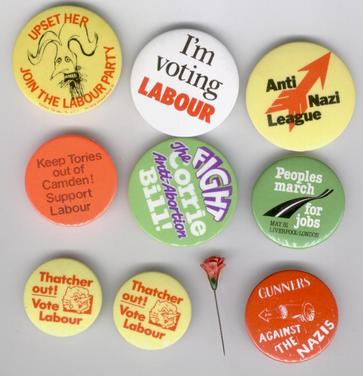 'You soft git', said an old friend. 'You never told me you had a website. And I never knew you collected political badges.' And courtesy of Martin, and this site, I now have some splendid additions to my collections.

These include some of the modern classics of the lapel badge - the Anti Nazi League phallic-style arrow in particular, but also the 1981 'People's March for Jobs' badge, and Gerald Scarfe's contribution to upsetting Margaret Thatcher.

The Corrie Bill is now forgotten, but the great campaign badge lives on. And the thing that looks like Ken Dodd's tickling stick, that's a New Labour-vintage red rose. Remember that!

My favourite among this marvellous selection: 'Gunners Against the Nazis', with its own rather individualist take on the Anti Nazi League arrow.  Thanks, Martin!

A gift from Glasgow 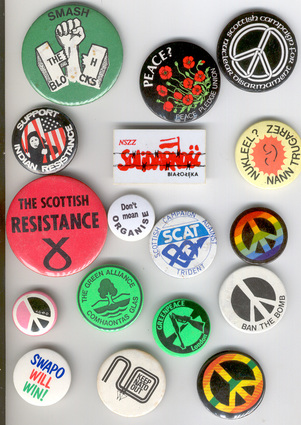 I've never met John Powles - who used to be the mainstay atr the excellent Centre for Political Song at Glasgow Caledonian University - but I am greatly in his debt for this selection of badges he has sent me.  As you'll see several of the badges are Scottish in origin and concerned with nuclear disarmament. But they reach much widely - from SWAPO to H-Blocks. And the one that reads 'NUKLEEL? NANN TRUGANEZ'? Well, as far as I can make out, that's 'Nuclear Power, No Thanks' in Breton.

The most iconic of these is the 'Solidarnosc' badge from the early 1980s - it has a design flair, and it also represent a key movement and political moment. There's a jauntiness about the image, the letters as if a crowd with a banner flying above overlaid rather ominously with barbed wire. And the Solidarity movement, so associated in its early days with Lech Walesa and the Gdansk shipyards, changed the face of Europe. NSZZ is part of the tilte of the Solidarity union.  Bialoleka, the other word on the badge, is a district of north Warsaw.

From the streets of London 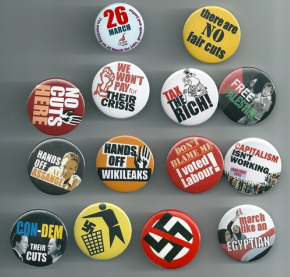 A great haul of contemporary badges - for which I have to offer warm thanks to marcher Liz Clark, and badge intermediary Zina Rohan. Liz acquired these on my behalf during happy days processing through the streets of central London, including on the mega anti-cuts demos of 26th March 2011.

The 'Con-Dem their cuts' badge is nicely done - and the Assange and Wilileaks badges are of the moment. But the one I like most is: 'march like an Egyptian'. A nice slogan! The designs, though, don't have the striking graphic simplicity of the best of the 'old' badges - the Anti Nazi League arrow, the CND logo, or anti-nuclear smiley sun. Perhaps I'm just getting sentimental, but they simply don't do badges like they used to. 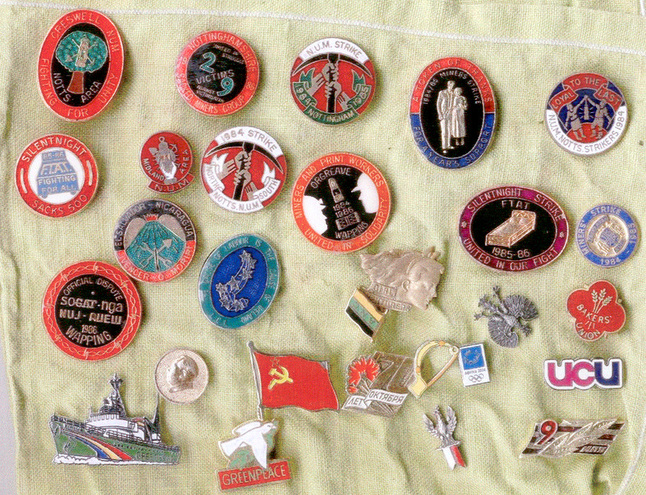 I bought this rather splendid collection of enamel badges from a street seller in Brick Lane. And when I say it was a bargain, well, it wasn't exactly dirt cheap.

But it's not often you get such a great selection of trade union badges - several dating from the 1984 miners' strike (including a Nottinghamshire miners strike badge - top row, centre), and others from the Wapping and 'Silent Night' disputes.

Quite the nicest, and the most simple, is the Bakers' Union badge - red with gold lettering and and a small sheath of wheat. Somewhat to my surprise, I discover that the union still survives, now known as the Bakers Food and Allied Workers Union.

A Saturday morning in Crouch End 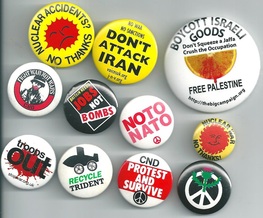 One of the best places to buy a range of political badges is the CND stall which is up and running most Saturday mornings in the centre of Crouch End. I got this haul on a brilliantly sunny Saturday - 1st October - with Pat Arrowsmith and colleagues keeping the stall ticking over. None of the activists were, I'd guess, under 70 - but they had pelnty of spunk and energy.

As you would expect from a CND stall, all these badges come from the sort sort of place, politically. I'm up for badges of all sorts. And if the Tories put more energy into badge making, I'd be buying theirs too. And there are some Tory badges on this page. But I guess badges are about activism, and that fits with some parts of the political spectrum more than others.

In the Year of Jubilee 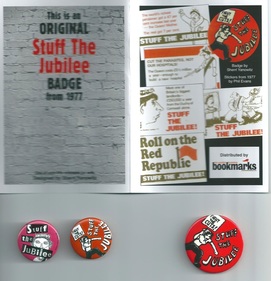 One of the most successful political badges of recent years has been Sherrl Yanowitz's 'Stuff the Jubilee' badge of 1977. There was something about the flair and energy of the design, and of course about the cause, which captured attention. The badge was put out by the SWP and sold in its tens of thousands. The story of the badge is here (and don't miss Sherrl's own comments about the badge and its success). It's so iconic the badge has been selling for upwards of £40 on eBay.

Well, a cache of original 1977 badges was uncovered, it seems - and put on sale, with the blurb shown here, for the very modest price of a fiver. The original badge is bottom right. And the smaller, orange-ier reissue - along with another 2012 anti-Jubilee badge - is shown to the left.

'Wearing Badges is Not Enough' 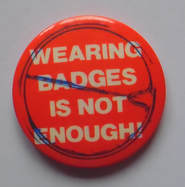 In November 2017, I was given a wonderful collection of more than 500 political badges - most from  the late 1970s and 1980s - by someone who had spotted my enthusiasm for them. A big thank you, Werrner! He accumulated these badges during his years as a student activist.

If you want to see something of the range pf badges - international, political, feminist, anti-racist - then take a look at this entry on my blog. Everything from Angela Davis to the Angry Brigade!