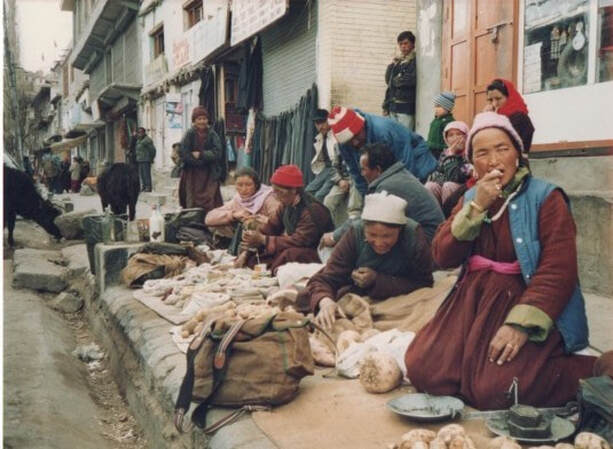 The people of one the most remote and inhospitable corners of India have won their longstanding campaign for a measure of self-government. The mountain fastness of Ladakh, close to the Chinese border, is to have its own elected regional council. Local people say it's the only way of making sure that development projects suit local conditions and of keeping the area's distinct Buddhist culture alive. Andrew Whitehead has been to the main Ladakhi town, Leh, where the campaign for autonomy has sometimes taken a curious form:

With his amiable manner and ambling gait, Chering Dorjay appears a model of good humour and tolerance. He earns his living in adventure tourism - organising treks in one of the world's most memorable landscapes. Taking groups across this arid high altitude desert, 11,000 feet up in the Himalayas, which in climate, culture, language and religion, has more in common with Tibet than anywhere else.

Yet it was Chering Dorjay who led Ladakh's Young Buddhist Association in a house-by-house search for electric heaters, which were seized, piled on a street corner in the main town of Leh, and then publicly destroyed. An act of petty despotism in anyone's books. But in Ladakh, where the winter is so severe that roads to the rest of India are cut off for seven months of the year, it seems an unpardonable sin.

The problem is that Ladakh s chronically short of power. In winter there's so little, local people are supposed to do no more than use a few low watt light bulbs. The Buddhist Association argued that those improperly resorting to plug-in heaters - rather than the traditional wood and dung fuelled stoves - were causing power cuts which made it impossible for youngsters to study.

The reasons for Ladakh's electricity famine explains why so many local people have been determined to gain a measure of self-government. There's a hydroelectric plant at Stakna, about thirty kilometres from Leh - sited on the river Indus as it makes its way through the austere Ladakhi moonscape. But like most development projects in the region, it was designed from afar. And it doesn't work.

For a start, the Indus freezes over for four months of the year. And then, when the thaw comes, so much silt is swept from the mountain-sides that the turbines can't cope. So the plant produces power for little more than half the year - problems which could have been avoided with a bit more foresight.

That's not the only way Ladakh has been neglected. Running water is rare. Leh, a town swelling to twenty-thousand during the brief tourist season, has no proper sewage system. Life revolves around shortages. One day the hotel had no eggs; the next, no bread. The tea stall at the airstrip was closed - it had tea, but no water.

All this - Ladakhis say - is the result of being administered by people who don't understand the area's problems. Not just the central government in Delhi. But the local state government of Jammu and Kashmir, which is understandably preoccupied by putting down the Muslim separatist insurgency in the Kashmir Valley.

There is something bewitchingly different about Ladakh. Its geographic isolation and unyielding climate have bred a robustly independent outlook. Village people proudly wear traditional dress. The man in long maroon frock coats. The women with their hair in long plaits, meeting at the end, and tucked into caps which look more like tea cosies.

Farming is a generous term for the desperate efforts of local people to extract a living from the soil. Few crops can survive the dry, stony earth and high altitude. Goats and other livestock fall prey to snow leopards. Wolves are sometimes sighted in the streets of Leh. Almost all forms of economic activity - agriculture, construction and road freight - have to be squeezed into the five months of summer.

Clinging to the hill-sides are ancient monasteries where boys, some as young as six or seven, recite Buddhist scriptures and sip yak butter salt tea. The tradition that every family should devote one son to celibacy and religious study still persists in some areas. Portraits of the Dalai Lama, the Tibetan spiritual leader, adorn the walls.

Chering Dorjay of the Ladakh Buddhist Association went with me to one of the more renowned monasteries at Thiksay, founded 600 years ago. With the prayer wheels spinning, and the discordant chanting of the novitiates seeping in from the courtyard, I asked him whether he would like his home area one day to be part of an independent Tibet. "No", he said; "Ladakhis once ruled over part of Tibet, but they never ruled over us. We're happy with autonomy within India."

Now Ladakhis have got what their wanted. The Indian government is setting up an elected council to give the 170,000 Ladakhis a real say in how their area is run. Democracy sometimes disappoints. But the proud and resilient people of Ladakh deserve a helping hand in their quest for development in tune with their culture and lifestyle. And for their desire to keep the appendages of the modern world - even electric heaters - under strict control.