This interview with Denis Healey was conducted at his flat in Pimlico in December 1991, when I was making a radio series for the BBC World Service 'What's Left of Communism?' I was at the time the political correspondent of the BBC World Service. I liked Denis Healey (1917-2015), who was Chancellor of the Exchequer in the Labour governments of 1974-79 and later deputy leader of the Labour Party. I recall that his wife Edna popped in as I was recording the interview - I believe she said that she too was briefly a member of the CPGB while a student at Oxford.

The original recording has been deposited in the National Sound Archive at the British Library. This has been posted here adapted to MP4 and in the MP3 original. I am also posting on this page a full transcript of the interview. 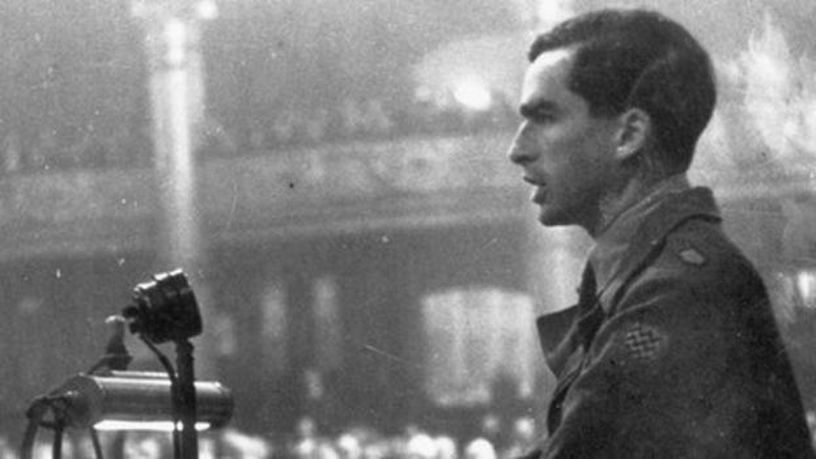 Denis Healey addressing the 1945 Labour Party conference
​AW: You joined the Communist Party at the end of your first year at Oxford -

Basically I think because it was the only party that seemed unequivocally in favour of standing up to Hitler. The Conservative party was in favour of appeasing him in the main. And the Labour party was divided between pacifists and a rather vague form of collective security. And I think that's why enormous numbers of people you'd never imagine joined at that time - John Biggs-Davison, who later became the chairman of the Monday Club; two - at least two people I know who later became Conservative ministers. And all for that reason.

But this was at a period when the Communist Party was coming out of a deeply sectarian phase, and its policy programme was still entitled 'For a Soviet Britain' -

Well, I don't think we were very conscious of its domestic policies. The watershed in the Communist Party internationally was the seventh world congress which took place I think in '35, the year before I went up to Oxford. I went up in the autumn of '36. And it was as you say very sectarian before that. Communists always wore beards, looked dirty, did badly in their examinations. Then when it became Popular Front, which was essentially the '37 move, which reflected of course the desire to create a popular front against the Nazis and fascists, everybody shaved, behaved well in public, and got Firsts in their examinations. And it was totally different. And we were hardly conscious of what it had been before that. Because young men of eighteen, they don't know what the political world was like when they were fourteen or twelve.

Edward Thompson, who I've also spoken to, who joined the party in Cambridge just a few years after you, tells me then most Cambridge communist students had got a photograph of [CPGB leader] Harry Pollitt on their mantelpiece. Did you have one?

No, I never did. No. We had a song. 'Harry was a Bolshie, one of Lenin's lads, but he was slain by counter-revolutionary cads'. But there was no hero worship at that time of Harry Pollitt or indeed of the national leadership. As I say, it was overwhelmingly, in my particular year, which was the end of the first year of the Spanish Civil War don't forget, it was overwhelmingly for international reasons rather than national.

How disciplined was the party? Did you have to sell the Daily Worker for example?

No. It wasn't disciplined in that sense at all. And again the international line of the Communist Party was the popular front against fascism [interruption] Yes, again I was a student communist so that we didn't play much part in the work of the Communist Party in Oxford except during the famous Oxford by-election of 1938, when Sandy Lindsay - he was the Master of Balliol - fought Quintin Hogg, later Lord Hailsham, on a popular front programme.

Indeed, that is the most important chapter in the British campaign for a popular front, that Oxford by-election -

Yes, I think it probably was, simply because it was the only case where you had a very well-known popular front candidate who couldn't by any stretch of the imagination be called a communist. He was a right-wing Labour party supporter, Lord Lindsay as he later became.

Any embarrassment among Labour supporters, his supporters, about working with communists?

No I don't think there was the because the trials in Moscow and the suppression of the kulaks [better-off Soviet peasant sand farmers] was not really very well known I would say among the political class in Britain. Some intellectuals like - Leonard Woolf was a notable example, had been fighting a battle for a long time with the fellow travellers like Victor Gollancz and John Strachey, who they thought totally misunderstood and misrepresented Soviet Communism. But they were a minority, and I think the bulk of us were content simply to be swept along by the tide of anti-fascism.

What about the change of party line in the early weeks of the war, when suddenly it went from being 'People's War against Fascism' to 'Imperialist War'. Any shock waves that you remember within the party at Oxford?

Oh yes. There was a tremendous shock wave over the Stalin-Hitler pact, which of course preceded the war, in a sense led to the war. It freed Hitler to mobilise his forces against France and the Low Countries. And a lot of people left the Communist Party then. I didn't myself partly because - it was rather an odd situation - I volunteered for the army on the day war broke out in September the third. And then I was told by a friend in the Communist Party that the line had changed, and we had decided it was an imperialist war not an anti-fascist war. And I said: baloney.
But of course at that time I was waiting to be called into the army, and expected to be in the army within a month. In fact, they didn't calls us up until the end of that term. They told us we could finish our Schools [finals exams]. So it was a whole year after volunteering before I actually joined the army. And I, I left the army really - I would say, left the Communist Party, over the fall of France, because I could just understand the communists supporting Russia because Britain and France had been unwilling to make an alliance with Russia against Hitler, which was the way we saw it. But then when it became obvious to a child like me that after the fall of France, Britain would be the next target, not to see this danger seemed to me absolutely ridiculous. And that's when I formally left the party.

You've described it as a bed-and-breakfast organisation, but in fact you stayed for three years. So that's rather more than an overnight stay -

No, but that is bed-and-breakfast in terms of politics, bed-and-breakfast in the sense that you join one day and leave the next I don't think's ever happened. But the average length of membership of the Communist Party was two or three years in those days, internationally not just in Britain.

Is there anything that's worth resurrecting from the shambles of the Communist experiment? Anything in terms of idealism, comradeship? Anything else?

Well, I think the idealism and comradeship was very real, and of course it exists in other parties of all types, Catholic parties too. But I think the world in which the Popular Front became a massive force, after all it formed a government in France under Leon Blum don't forget, that world has totally disappeared.
I think the thing you've got to remember is that the thirties was the period when it seemed as clear to young people that capitalism has failed as it's clear to young people know that communism has failed. We'd seen capitalism produce fascism in Italy, Hitler in Germany, a great recession which had produced mass unemployment all over the world. And there were very, very few people in the chattering classes, among intellectuals, who thought capitalism had a future at all.And, as I say, the failure of capitalism was as evident then as the failure of communism now.
​  Now, it could be people will change their attitude towards communism because in China, for example, where they've gone about things in the opposite way from the Russians, concentrating on introducing bits of the market in their economy, it's probably the fastest growing economy in the world, faster even than Japan. But at the cost, as you know, of terrible oppression in the political field.

I just wonder if you had any anecdotes about your time in the CPGB in Oxford which would give some impression, some flavour, of what party activity was like? What it meant to be a communist then?

Well, I think the big thing to remember is that the student movement at Oxford was a very lively, happy, humorous movement. It wasn't grimly sectarian. We used to sing songs about: 'I'm the man, the very fat man, that waters the workers' beer'. And, you know: 'As I crouch beneath the table, where the politburo meets, they would startle from their seats, if they knew of half the feats, of diversionary aims and espionage, and civil and military sabotage, that I've performed the whole year round for Hitler'. And I always remember a friend of mine who made a parody: 'Twas Christmas Day on the kolkhoz [Soviet collective farm], local river in flood, peasants were sitting on doorsteps, all sunk in depression and mud'.
It was, as I say, a very outgoing and open movement, and appealed to an enormous number of people. I mean, most of the poets of that time were communist - Auden, Spender, Isherwood - or fellow travellers; Louis Macneice was one of the very few who rejected that. Very large number of painters; the surrealists, oddly enough, although surrealism is as far from communism as ever you could imagine and rejected by the Russians of course - they were nearly all communists.

So warm memories on the whole?

Oh yes, of that period, yes. I mean, I think I was wrong now, of course. On the other hand, I don't know quite what one could have done otherwise, except worked harder in the Labour party to change its policy and make it more realistic.