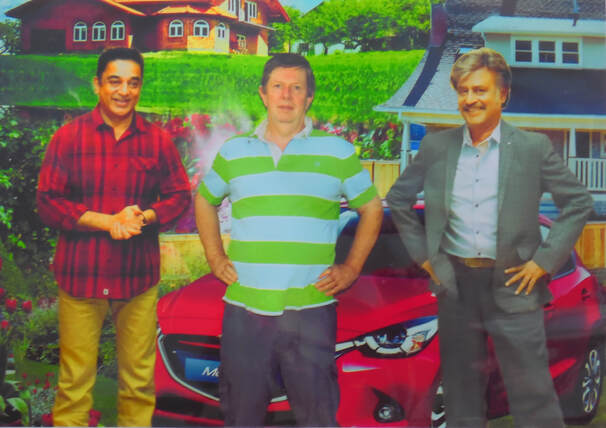 CUE: To South India, where not one but two Tamil-language film stars are turning to politics – aiming to transform their huge fan base into support at the ballot box. And this in a region where more often than not in recent decades, the top political job has been taken by someone who has gained fame in the movie industry. Andrew Whitehead in Chennai has been watching the drama unfold:

Rajinikanth is at first glance an unlikely celebrity. He’s in his late sixties, bald, with a greying beard, round glasses – and the appearance more of a sage than a superstar. But in this film besotted corner of India, he’s about as big as you get: in terms of fame – and popularity - he outranks politicians, cricketers, singers, religious leaders, the lot.

His new movie is called ‘Kaala’ - black. It is, by some counts, his 155th film. There have been a few flops along the way. But this seems set to do well. A video teaser released on social media was – say the promoters - seen 12 million times in the first 24 hours.

‘Kaala’ is in Tamil, the first language of some seventy million South Indians. You will have heard of Bollywood, the Mumbai-based Hindi language film industry. South India’s movie scene is, in proportionate terms, even bigger.

In this gangster movie Rajinikanth, sporting a full head of hair and dark glasses, is the ‘don’, the criminal mastermind. The film is being trawled for any sign of a political message. ‘Kaala’, black, the colour of the Dravidian movement, the assertion of Tamil pride and social equality which has reshaped politics here. Black, some critics have mused, because it’s a reminder of Rajinikanth’s dark complexion, his humble background, his association with the masses.

All this matters because Rajinikanth has declared that he intends to enter politics – indeed, to set up his own party. This has the potential to turn Tamil politics upside down. Not least because the movie industry has made more political impact in Tamil-speaking South India than anywhere else in the world. For 43 of the last 50 years, the state’s chief minister has either been a movie star or someone closely associated with the film industry.

M. Karunanidhi, an acclaimed Tamil screen writer, spent twenty years as chief minister.His rival - the biggest Tamil film star of them all, M.G. Ramachandran - established a breakaway party and was in power for a decade. MGR’s old home is now a museum, complete with his now stuffed pet lion, Raja. The eye-catching memorial at his grave looms over Chennai’s Marina beach. Thousands visit every day, some putting their ear to the marble slab to check out the tale that you can still hear the tick of his Rolex watch.

MGR’s political successor was his leading lady – probably in more ways than one: Jayalalithaa, a shrewd and effective politician who dominated the Tamil political scene for a quarter-of-a-century. She died in December 2016 – and now lies alongside her mentor. That appeared to bring down the curtain on the era of film star chief ministers. But since then, there has been a power vacuum, an absence of commanding political personalities.

So is the stage set for another movie star at the helm? Opinion is sharply divided. Rajinikanthhas left it rather late in life to venture into politics. No one’s yet sure quite what he stands for – beyond an assertion of the need for a more spiritual side to public life.

And while his vast network of fan clubs will provide quite a launch pad, those with political ambitions here need very deep pockets. More than anywhere else in India, vote buying has become a well organised industry. Voters expect lavish food and drink and pay offs often amounting to thousands of rupees before they pledge their support.

Rajinikanth faces another hurdle too. He’s not the only Tamil film star who is turning to politics. Kamal Haasan, also in his sixties and seen as a touch more sophisticated as an actor, has just launched his own party, [the Centre for People’s Justice].

In his breakthrough movie, back in 1975, Haasan played a young rebel who falls head-over-heels in love with an older woman. Also in the cast …Rajinikanth making his screen debut. Their careers have been closely entwined. But as Kamal Haasan recently acknowledged: they have been competitors - and their rival political ambitions are bound to sharpen that divide. [Though both seem to be hedging their bets – they are said to be still considering new film roles.]

There’s no room for two ageing thespians at the apex of Tamil politics. They could make common cause – though it’s difficult to see either ceding the leading role to the other. So, really, for one to thrive, the other has to fail. What a story we may have of deals and demagoguery, of backstabbing and betrayal.

It has all the makings of a marvellous Tamil movie.
​