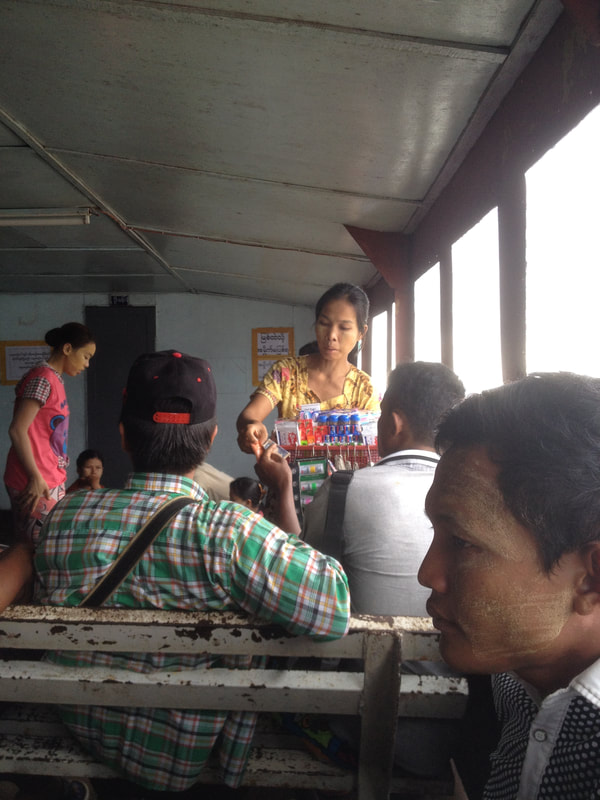 On board the Yangon ferry
BY FERRY IN BURMA - October 2014

CUE: Burma, now generally known as Myanmar, was once the arrival point for millions of migrants from India in particular – though after decades of economic and political isolation there are only occasional reminders of what a cosmopolitan city Rangoon, now Yangon, once was.  Andrew Whitehead took to the water – a ferry across the Yangon river – to seek a sense of how the city has changed, and is changing once more:

The turning to the ferry jetty lies just opposite the Myanmar Port Authority’s imposing 1920s headquarters. The trackfunnels through food stalls, vegetable vendors, a tangle of cycle rickshaws, young men pushing bikes laden down with a live cargo of dazed upside-down chickens, and an endless press of pedestrians.

At first it feels like gridlock, but this is a well-rehearsed routine. You don’t have to wait too long, with two large boats perpetually plying to and fro on the fifteen-minute river crossing. The crowd quickly shuffles on board – and that’s when the bazaar really starts.

The ferry is a floating market. On both decks, vendors set up stalls on the floor, selling everything from cheap toys to cigarettes. Scores of peddlers, men and women, saunter between the packed benches – several bearing large wicker baskets full of tiny boiled eggs in speckled shells. Quails’ eggs, I discovered - a popular snack. ‘Those eggs make you fat’, my neighbour warned. ‘Too much fat.’ He worked in the tourist trade and clearly wanted to practise his English.

Shortly after the boat set off, another young man – confident, articulate, and to my untutored ears persuasive – stood up and began to orate. An itinerant preacher, perhaps, or a political activist. No, my neighbour whispered, he’s selling medicine - a cream to clear the complexion.

Heading back across the river, I glimpsed a view which millions must have seen down the decades – and at a life-changing moment. The colonial-era rooftops of downtown Yangon, with the church-like tower of the Port Authority building standing proud.

It’s difficult to imagine now, but this once was on one of the world’s busiest migration routes. In the century before the Second World War, almost thirty-million people moved by boat across the Bay of Bengal,between India, Myanmar and Malaysia – with Rangoon, as it then was,a principal destination.

As Asia’s rivers go, the Yangon doesn’t have the mightiest of reputations. Not a match for the Yangtze or the Ganges, the Mekong or the Indus. Overshadowed nearer to home by the Irrawaddy, whose vast delta is Myanmar’s– and historically the region’s – rice bowl. But on its banks lay one of Asia’s most cosmopolitan cities.

It had a Jewish mayor a century back. An Armenian family set up what is still the city’s grandest hotel. There’s a Chinatown dating back to the 1850s. And South Indians came over in huge numbers. At the outbreak of the Second World war, the Burmese were a minority in their own capital.

Then there was a rupture – a profound break with the past. Japan’s wartime occupation of the country pro – then, after Burma’s gaining of independence from Britain in 1948, a succession of military-led, isolationist governments – changed all that. Many of the moneyed classes, particularly those of migrant stock, moved out. Patterns of migration across borders were disrupted beyond repair.

In the heart of Yangon, an old Armenian church and a synagogue set up by Baghdadi Jews are testament to two all-but-disappeared trading communities. They are still going, in buildings which speak of the wealth and influence those communities once enjoyed, but with congregations in single figures.Other places of worship established by migrants – mosques, Hindu mandirs, Methodist churches – are better patronised. The Indian-origin community is still evident, but diminished in numbers and even more in influence.

Myanmar’s long years of isolation have had the incidental benefit of conserving the city’s colonial architecture – often as dilapidated as it is splendid. It doesn’t have the antiquity or inspire the awe of the Shwedagon pagoda and the city’s other rich Buddhist heritage.It’s not quite a match for Calcutta’s older, grander remnants of Empire. But it is a more complete colonial city centre than survives perhaps anywhere else in Asia.

And not a MacDonalds or Starbucks in sight. There are some Japanese and Korean brand names making their mark – and some malls where donut shops are starting to compete with the street food – but Yangon is a city which has largely kept the world at bay for half-a-century.

The pace of change is quickening, however. In the wake of both a political and an economic opening-up, a new bout of mercantilism, of globalisation,is starting to make its mark in Myanmar. A new type of migrant is moving in. The diplomats, the development agency bosses, the business executives are more in evidence.

​Though these days, they don’t come by boat.
​