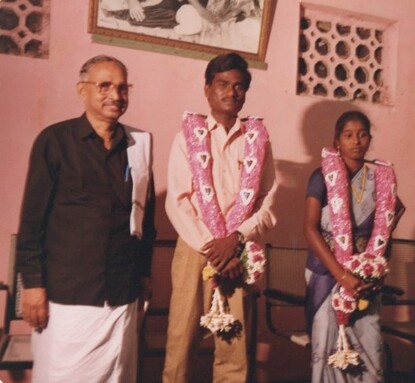 K. Veeramani with Irudayaraj and Visalatchi
A SELF-RESPECT WEDDING IN MADRAS - March 1994

Marrying across caste barriers in India is no easy matter. Parents are often irreconcilably opposed. For the couple to persevere takes courage and a generous measure of encouragement. In Madras in South India, a rationalist institute committed to breaking down centuries-old caste divisions helps young people from different communities to marry. Andrew Whitehead winessed what the local rationalists call a "self-respect" wedding:

The bride, Visalatchi, was a high caste Hindu; the groom, Irudayaraj, a low caste Christian. A few days ago in Madras, I had the privilege of attending their wedding.

In contrast to the traditional, elaborate, Hindu marriage ceremony, it was a simple, almost perfunctory, affair. An officiant, a few friends and well-wishers, an exchange of garlands, and the couple - looking a little ill-at-ease - were declared man and wife.

They were both trainee teachers. Not any more. They have abandoned their studies, left their home city and are now starting a new life on the other side of India. I better not say where. All because in parts of India, caste barriers remain almost impermeable.

Perhaps the parents will come round in time. But often the social disgrace is too much to bear. Better to disown a child than admit that he or she has married out of caste.

If the circumstances of the wedding were rather sad, the institution which conducted it is positively inspiring. It was a self-respect wedding service, legally validated, organised by the Periyar Self-Respect Propaganda Institution. A rationalist wedding amid India's encircling religious creeds.

It's three generations since Gandhi rechristened the untouchables at the bottom of the caste system 'harijans' or children of God. For the vast majority of high caste Hindus, the thought of a marriage alliance with a harijan is still too awful to contemplate.

Old caste barriers have eased. India now has poor brahmins and half-prosperous harijans. In a few states, the lower castes have exerted their political muscle. But by-and-large, the old prejudices are still observed.

Periyar, a founding father of the Dravidian movement in southern India, rebelled against the caste system. And he took that two stages further. If it's wrong to discriminate because of the caste you're born into, it's equally wrong to discriminate on gender. And if religious belief buttresses caste and sex divisions, then let's not merely repudiate the symptoms but banish the condition that caused them.

There's a statue of Periyar outside the rationalist centre in Madras. It bears his most famous incantation: 'He who invented God is a fool. He who propagates God is a scoundrel. He who worships God is a barbarian.'

India has a proud tradition of intellectual tolerance Still, for Visalatchi and Irudayaraj, it as any port in a storm. Anxious to marry at next-to-no notice, the rationalists were the only people in a position to oblige.

Perhaps Visalatchi had spent years dreaming about a traditional wedding. Perhaps she would have liked nothing more than to wear a wedding sari, and to walk seven times around the fire. Perhaps Irudayaraj resented the high caste rationalists preaching as he exchanged his marriage vows. Perhaps he'd hoped for a more auspicious venue than an upstairs lecture room at an atheist institute.

Yet even here old patterns of deference persist. At the end of the service, the groom bent down to touch the feet of the man who married him. A traditional token of esteem. But of immense embarrassment to the assembled rationalists. What an awesome task they face in combating caste and ritual, and enjoining all Indians to have some self-respect.

[POSTSCRIPT: India's scheduled castes would nowadays wish to be known not as harijans but as dalits.]