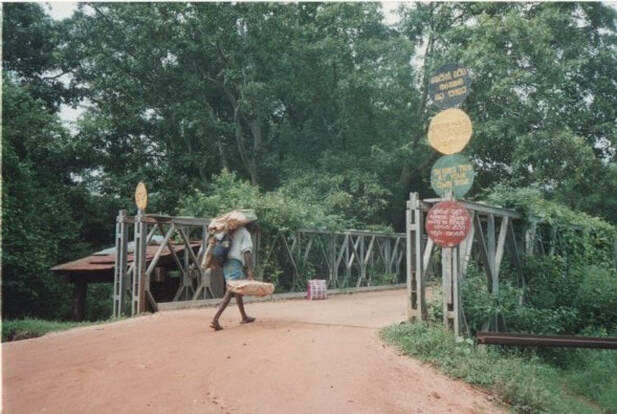 The battle for the northern Sri Lankan city of Jaffna has again focussed world attention on the long history of tension between the island's majority Sinhalese and minority Tamil communities, That and other conflicts within Sri Lanka have cost the lives of many of the country's leaders, and tens of thousands of its citizens. This was brought home to our correspondent now in Colombo, Andrew Whitehead, when he reflected on the fate of those he'd met and interviewed on his previous visit.

Coming back to Sri Lanka after nine years has brought a curious cocktail of emotions. My last time here was my first overseas assignment for the BBC. Three weeks covering peace talks which conspicuously failed to solve the island's complex, and appallingly savage, ethnic conflict.

Colombo is a marvellous city. Alongside the ocean. Prosperous by South Asian standards. Relaxed and friendly. I have good reason to look kindly on the place. Covering Sri Lanka's misery was a good career move.

Yet so many of the people I met last time round are dead. Assassinated. Surely no other nation can match Sri Lanka's record for losing its political leaders to bombings and bullets.

And not only the politicians. Richard de Zoysa was a news reader on Rupavahini, the state-run television network. A young and talented journalist from a well-connected family.

He appeared at my hotel door one day to complain that I'd got my geography all wrong. I'd reported that the rail track had been blown up at a spot well beyond the reach of even the most adventurous Sri Lankan train. Discomforted perhaps by my profound embarrassment, he took me out for a drink one evening. I returned to the hotel as the pillion passenger on his motorbike.

Four years later, Richard de Zoysa was abducted, apparently by men with connections to Sri Lanka's security forces. It was at a time when a left-wing Sinhalese group was staging what almost amounted to an armed rebellion. There's little to suggest that he was in any way connected. But in Colombo in the darker days, just being a liberal was dangerous.

At least his body was recovered - washed ashore on a beach north of the capital. Thousands of others who went missing at the same time remain missing.

Last time here, I arrived at the office of Lalith Athulathmudali, then Sri Lanka's minister for national security, with an introduction from one of his contemporaries at his Oxford college. Everyone said he was one of the hawks in a very hawksih government. But I got the briefing I wanted.

Lalith Athulathmudali was blown up, probably by the Tamil Tigers, a couple of years back.

The main purpose of my initial assignment was to report the visit to Colombo of leaders of the Tamil United Liberation Front - moderate representatives of the island's Tamil minority who even then were being comprehensively outflanked by the separatist Tamil Tigers. Their head was a gentle, avuncular man called Appapillai Amirthalingam. I interviewed him in his none-too-grand Colombo hotel room.

A few years later I read that he'd been shot dead in Colombo. He was, it seems, having talks with a Tamil Tiger delegation when one pulled out a gun and killed him.

Other rising stars of Sri Lanka's political firmament nine years ago have also been butchered: Ranasinghe Premadasa; Vijaya Kumaratunga; Gamini Dissanayake. These were not political lightweights. But Sri Lanka's leaders.

There are three women in the cabinet - including the president, and her mother, the prime minister. All three are political widows. Each widowed, as best we can tell, by different political forces.

I remember a Tamil MP calling on my on my last visit. He turned up unannounced and I invited him to tea in the hotel lounge. Over biscuits, he announced that sixty-seven of his constituents had just been massacred by the mainly Sinhalese Sri Lankan army. When I expressed incredulity, he produced a list of the names of those slaughtered. There's little reason to believe he was exaggerating.

The massacres continue to this day. Thought latterly the ruthless Tamil Tigers have more blood on their hands than the Sr Lankan military.

Looking across the political landscape, only two key players remain alive and active from 1986. Velupillai Prabhakaran, the near-legendary leader of the Tamil Tigers, and his deputy, Anton Balasingam. The organisation responsible for much of Sri Lanka's relentless carnage, and which has lost thousands of its own members, has been the most successful in protecting its own top ranks.

Censorship is now in force in Sri Lanka. Which is why hotel receptionists and switchboard operators have been pestering me with requests for the real news of what's happening in the north.

There are no independent accounts of the conflict. No war reporters, no prying cameras. Yet the people the government denounce as bloodthirsty terrorists have been getting in touch with me here in Colombo from various European capitals. By fax and by phone.

The tales each side tells - casualties, clashes, atrocities - have a very familiar ring. Just what I was filing nine years ago. Sadly for Sri Lanka, the story remains the same. Only the cast list has changed.
​