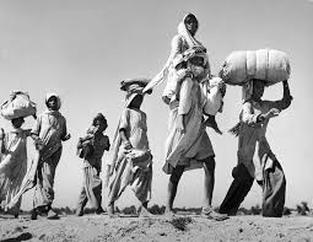 Photograph: Margaret Bourke-White
In 1997, after four years as a BBC correspondent based in Delhi, I had the enviable opportunity of making a radio series for the BBC World Service to mark the fiftieth anniversary of India's and Pakistan's independence. India: a people partitioned sought to be a social history of Partition: not about the high politics of independence, nor about the British Raj and those who upheld it, but about the lived experience of the millions who were caught up in the Partition whirlwind.

It was a huge undertaking - Zina Rohan produced the series, Anuradha Awasthi was the researcher, and I relied hugely on the help and expertise of colleagues including Nazes Afroz, Ram Dutt Tripathi, Mazhar Zaidi, Zaffar Abbas, Altaf Hussain, Bisakha Ghose and many others.

The series won an award at the New York Festival, and propelled me towards researching and writing a book about the origins of the Kashmir crisis in 1947, A Mission in Kashmir. The tapes and partial transcripts of the scores of interviews across South Asia conducted for the series have been deposited at SOAS in London, and I have posted elsewhere a list of that material.

The radio programmes are posted here with the permission of the BBC World Service (in botj MP3 and MP4 formats). They are also now available on BBC iplayer.

1: The Gathering of the Storm

The first programme looks particularly at Bengal - the memories of those who lived through the Great Calcutta Killing of 1946, the spread of the violence to Noakhali in what is now Bangladesh, and the growing sense of foreboding about the prospect of partition.

2: The Killing Fields of Punjab

Punjab suffered more grievously than anywhere else in 1947 - a composite culture torn apart, a province split in two, mamy millions displaced, and hundreds of thousands killed.

3: The Tearing of the Veil

Tens of thousands of women suffered rape and abduction during Partititon, as members of all communities sought to dishonour the other through sexual violence. This programme opens with the writer Amrita Pritam's personal reflections of living through Partition, and the verse she wrote expressing the anguish of the women in Punjab.

The refugee experience was one of the defining elements of Partition - it has reshaped much of north India and Pakistan. This programme reflects the personal testimonies from those who moved, and some of those who chose to stay.

Kashmir is the most evident unfinished business of Partition, and 1947 saw the first shots fired in a conflict which remains unresolved and which has bedevilled relations between India and Pakistan ever since independence.

In 2000 - three years after the first broadcast - the series was repeated on the BBC World Service. I remade the final programme, reflecting the acute tension between India and Pakistan in the aftermath of the Kargil conflict - and that audio is posted below.