I love old political journals and newspapers - the feel, the design, and the sense of connection it allows with past movements. On this page, I feature a few of my favourites.

The Worker's Friend - the 'Arbeter Fraint' - was a Yiddish newspaper published, mainly in the East End of London, from 1885 to 1932. Its heyday was in the years just before the First World War, when the movement, under the guidance of a German goy Rudolf Rocker, enjoyed wide support among recent Jewish migrants in the East End and in several other British cities. As the typography of the masthead above suggests, it was a confident, forward-looking movement. Rudolf Rocker published his biography The London Years, and his son, the artist Fermin Rocker - whom I knew - revisited the East End of his boyhood in an illustrated memoir, The East End Years. Bill Fishman retrieved the story of Rocker and his chaverim in his wonderful East End Jewish Radicals, 1875-1914.

I interviewed Fermin and several others who remembered the Jubilee Street club. the pre-war 'Arbeter Fraint' and a rich culture which fell victim to the First World War. The audio of these interviews has been deposited at the British Library Sound Archive. 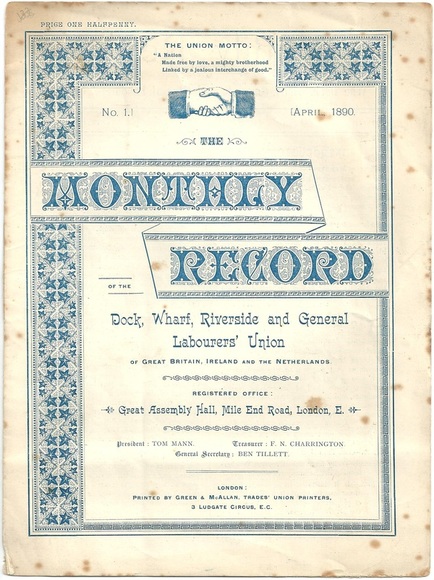 The first issue of the journal of Tom Mann's dockers' union - the victors of the 1889 Dock Strike in London and the trailblazers of the 'new unionism' of the semi-skilled and unskilled.

The Dock, Wharf, Riverside and General Labourers' Union was founded in 1887 and came to national prominence with the Dock Strike. This monthly journal was started in the year after the strike, and at the bottom of the cover you can see the names of Tom Mann and Ben Tillett.

Eventually, in the 1920s, the union became part of the Transport and General Workers' Union.

Much of the content of this initial monthly issue is given over to the campaign for the eight-hour working day. There's also an account of the union's quarterly delegate meeting at Toynbee Hall, with a list of all the delegates present.

The union motto is a little difficult to make out from the accompanying image. It reads:

'A Nation
Made free by love, a mighty brotherhood
Linked by a jealous interchange of good' 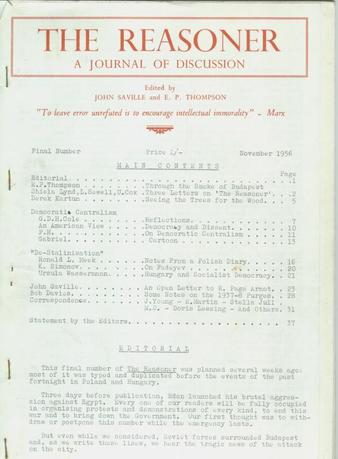 This is the third and final issue of 'The Reasoner', edited by John Saville and E.P. Thompson and a rallying point for reformers and anti-Stalinists within the Communist Party of Great Britain.

It captures the momentous events of the autumn of 1956 - the combined impact of the Suez fiasco and the Soviet invasion of Hungary. In a blistering article entitled 'Through the Smoke of Budapest', sometimes said to have been typed directly on to the duplicating sheet, E.P. Thompson wrote: 'Stalinism has sown the wind, and now the whirlwind centres on Hungary. As I write the smoke is still rising above Budapest.' This was political polemic at its most trenchant.

Within weeks, both Saville and Thompson had left the party - and indeed the CPGB lost most of its intellectuals, and many thousand of other members, a blow from which it never recovered.

'The Reasoner' became 'The New Reasoner' which in turn merged with another journal to become the 'New Left Review'. There's something about the urgency, the drama, the passion of this particular issue which makes it stand out, even more than half-a-century after it appeared. 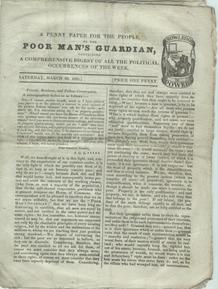 The 'Poor Man's Guardian', the paper associated with Henry Hetherington, was a radical journal of the 1830s - it described itself as 'a penny paper for the people' - which set out to challenge the stamp duties and other restrictions on a free press.

At its peak, the paper sold more than 200,000 copies per issue. It defied the stamp taxes, which were set at a massive fourpence per copy but were reduced to a penny per copy in 1833 - a huge victory for Hetherington and what were known as the 'unstamped' press.

The 'Poor Man's Guardian' is renowned for its iconography. One of the most resonant images of radical journalism is the emblem on the top right of the page depicting a printing press bearing the words 'Liberty of the Press' and the legend: 'Knowledge is Power'. 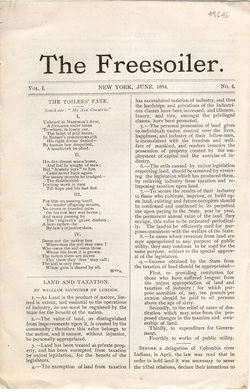 A curiosity even within the curious world of political journals. 'The Freesoiler' was a New York publication which was part of the movement spearheaded by Henry George, the radical political economist infuential on both sides of the Atlantic who campaigned for a single tax on land.

Henry George wanted to tackled the big landlords and their monopoly on land - he wanted a fair and equitable basis to taxation - he wanted to promote the interests of the rural and urban poor and to give them greater voice - and he also wanted to see the land being cultivated as small farmsteads.

To quote from the constitution of The American Free Soil Society, they supported ' the common right of the people to the soil upon which they must live and out of which the Creator designed that by their labor they should obtain their subsistence'.

The lead article in this June 1884 issue was by William Saunders, the London corresponding member of the society. Its guiding force was a libertarian, J. Beverly Robinson. 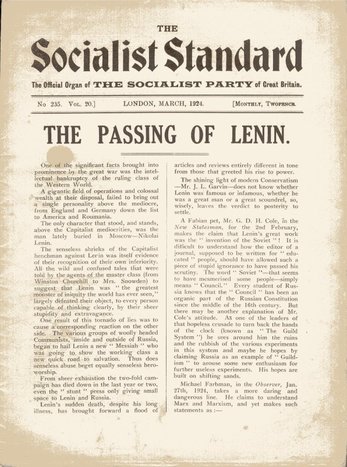 The 'Socialist Standard' is one of the great survivors of political publishing. It was founded in 1904, had been going twenty years when this edition appeared, and is still published today. The Socialist Party of Great Britain has never made much of an impact even within the limited confines of the British left, but it certainly has staying power.

The SPGB, by the way, didn't approve of Lenin. This article by J. Fitzgerald - one of the SPGB's most noted propagandists - is fairly generous to the Bolshevik, but makes clear that his errors arose from his failure to apply classical Marxism.

The SPGB remains something of an enigma. Its 'Declaration of Principles' - published in every issue of the 'Socialist Standard' - has remained unchanged since 1904. It declares that the party 'enters the field of political action determined to wage war against all other political parties, whether alleged labour or avowedly capitalist'. It sounds fierce, but the party has always come across to me as amiably eccentric.

I bought this and a bundle of other old copies of the 'Socialist Standard' from Andy Slovak's hugely enjoyable second-hand book shop in Cromer.

'Voice of Labour: a paper for all who work and think' 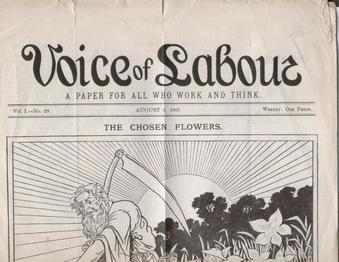 An anarchist paper from the years before the First World War. It was published in London by Thomas Keell. This issue contains several articles by the precocious Guy Aldred (under his own name and as 'Ajax Junior'), and a short piece by Jim Dick, who became known for writing a column for children in the radical press.

The most notable aspect of the paper, however, is the cover illustration - a regular feature. The artist appears to sign the covers as 'Sinne' - but that name doesn't mean anything to me. Any ideas? Do drop me a line. 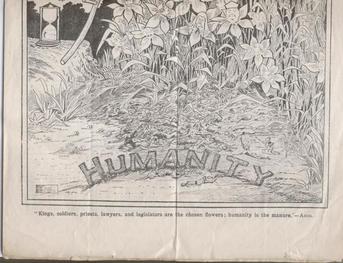 I have scanned the lower part of the cover separately so you can get an idea of the full design - the paper published in roughly A3 format so it's too big for me to scan in one go. It's a highly stylised composition, but effective. 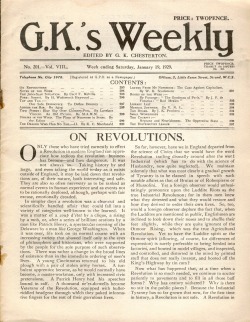 A very curious political journal, edited by the writer G.K. Chesterton, and trading on his celebrity. 'G.K.'s Weekly' was the journal of the Distributist League, of which Chesterton was president.

'The League offers the only practical alternative to the twin evils of Capitalism and Socialism', the paper declares. 'It is equally opposed to both; they both result in the concentration of property and power in a few hands to the enslavement of the majority.'

The League had a certain longevity, but never really got anywhere. One of the cul-de-sacs of inter war politics. But then the by-way of politics are often so much more interesting than the highways.

I bought this copy, in very good condition, for an eminently reasonable £3 at The Bookroom in Melrose in the Scottish Borders. 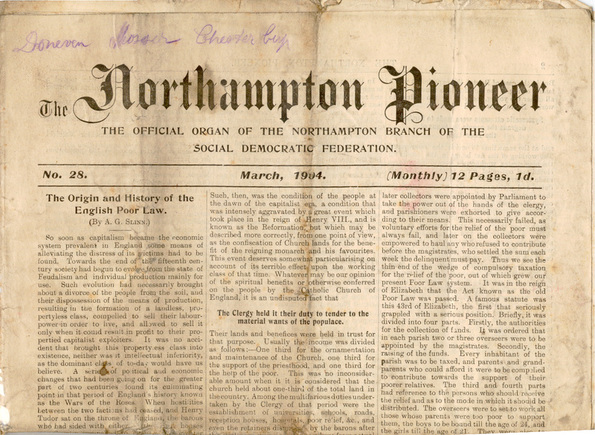 The Social Democratic Federation was formed in the 1880s - the most important element in the socialist revival of that decade. It had pockets of strength in London (Battersea, Clerkenwell), Lancashire - and the old radical stronghold of Northampton, Charles Braldaught's onetime Parliamentary seat, where it also had a presence in local government.

This is a wonderful edition of the SDF's local monthly paper. You can tell that the SDF put a lot of effort into local government. The twelve pages consist largely of reports on council meetings.

Quite the most interesting part of the 'Pioneer' is the final two pages - the boxed adverts. These include promotion of weekly meetings of the SDF at the local Socialist Hall, and of its national weekly, 'Justice'. And there's an ad for the Boot and Shoe Operatives' Union. On top of that there are ads for a tobacconist, a tailor, an umbrella maker, a baker, a cycle shop, even a 'pawnbroker's salesman' specialising in sewing machines. All revealing how much the SDF at local level was tied in to Northampton's municipal and public life.

The SDF was earlier in foundation, and more militant, than the Independent Labour Party. While the ILP contributed to the creation of the Labour Party, the SDF was part of a tradition which came to be associated with the Communist Party.