Harry Young (1901-1995) joined the British Communist Party shortly after it was founded. He went to Moscow to attend a Comintern Congress in November 1922, got a job working for the Young Communist International and finally returned to London in 1929. He left the CPGB in the 1930s and joined the Socialist Party of Great Britain (SPGB) in 1940, remaining a member of the party until a split a few years before his death.

The YouTube item posted here includes a couple of minutes of Harry Young speaking in typically florid style about meeting Stalin while based in Moscow. This is an extract from two much longer interviews which I conducted with Harry at his home in Sudbury in 1992. I have posted the audio of these interviews on this page. They have been deposited at the National Sound Archive at the British Library. Also below are two BBC radio programmes - one from Radio 3 in 1976 and the other from the World Service in 1992 - which feature Harry and his memories.

I have also posted below an article I wrote about Harry for the New Statesman in 1992 and a newspaper cutting from 1994 with a good photo of Harry. His typescript autobiography is at the Bishopsgate Institute.

My first long interview with Harry Young was at his home in Sudbury near Wembley on 3 January 1992. Over an hour-and-a-half, he talked about his early involvement in the socialist movement in London, joining the CPGB in 1920 and working as an office boy in the party HQ. He went on to recount his role in the founding of the Young Communist League. He described Moscow in the 1920s and his memories of Lenin, Trotsky, Stalin, Zinoviev and Ho Chi Minh as well as of fellow British Communists. He explained how he was present at several key Comintern meetings in Moscow before relating his return to London and eventual decision to join the SPGB.

In my second interview with Harry, on 21 April 1992, he talked of his memories of Tom Bell and other early leaders of the British Communist party. He discussed the influence of secularism and his membership of an SDF-aligned Socialist Sunday School, the London branch of the IWW and the British Socialist Party. He talked once more of his years in Moscow and meeting Trotsky and Stalin, the Zinoviev letter, Comintern's British and Chinese commissions and his awareness of the spies infiltrating the movement.

God bless Radio 3 - devoting twenty minutes to Harry Young as long ago as 1976.

This World Service programme, 'Surviving the Twentieth Century', was produced and presented by Zina Rohan and broadcast in January 1996.
​ 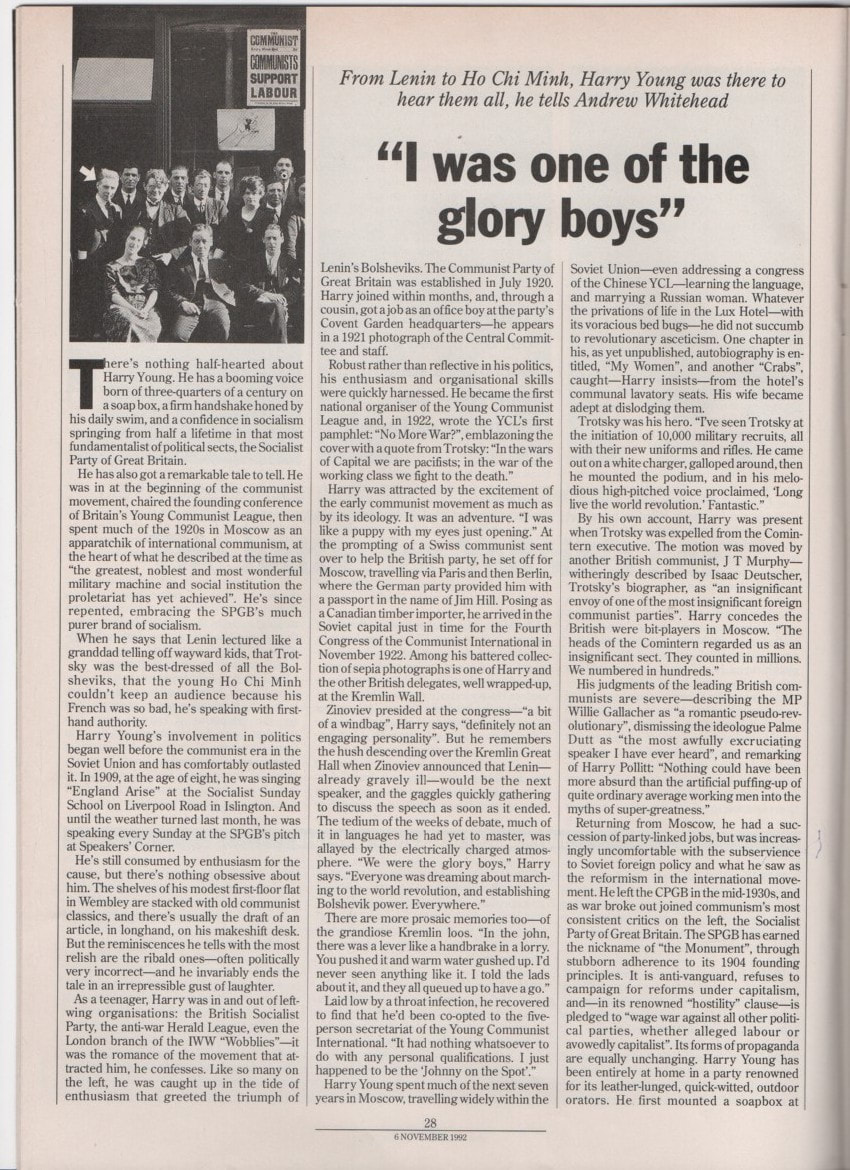 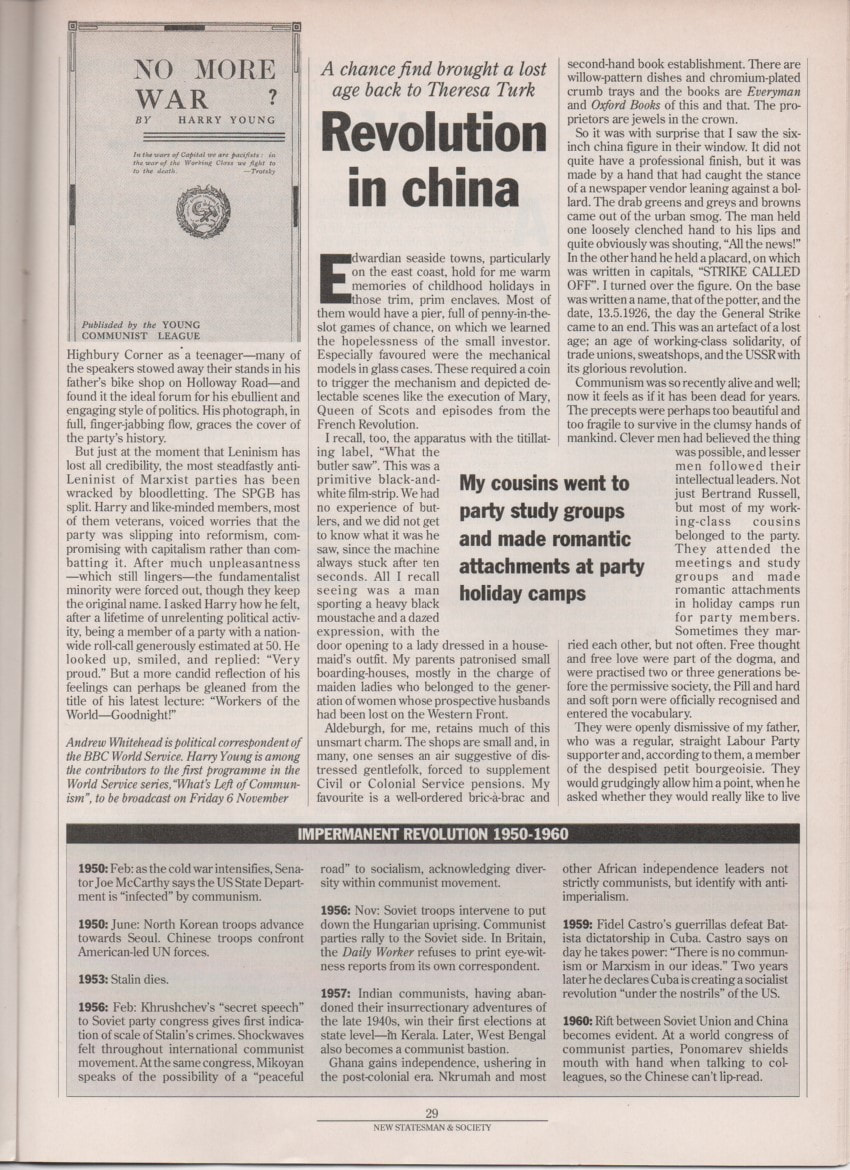 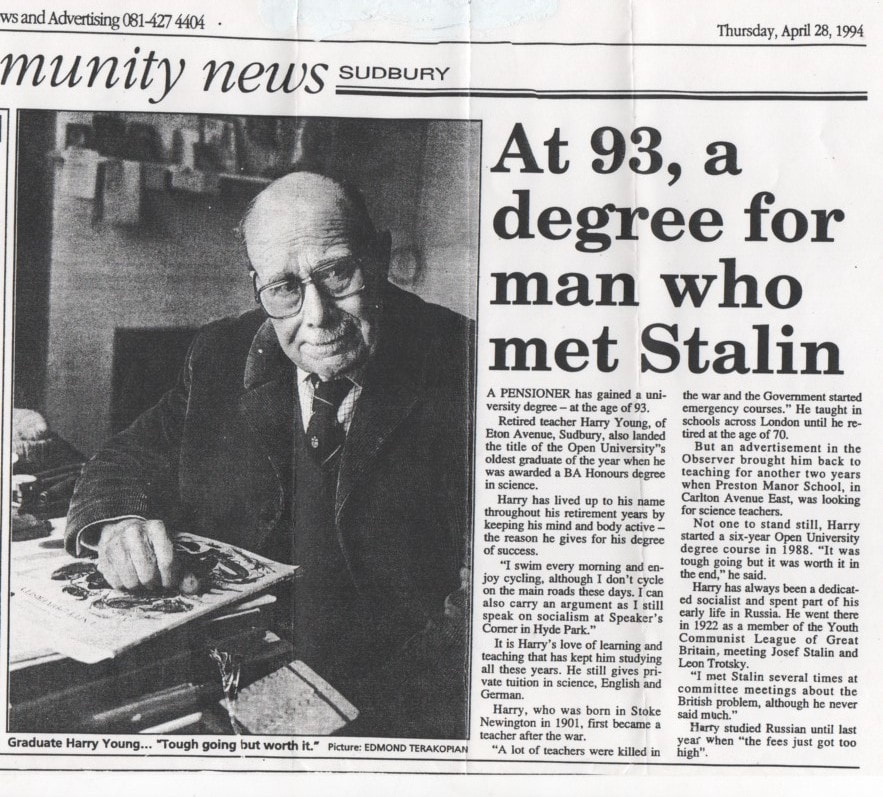