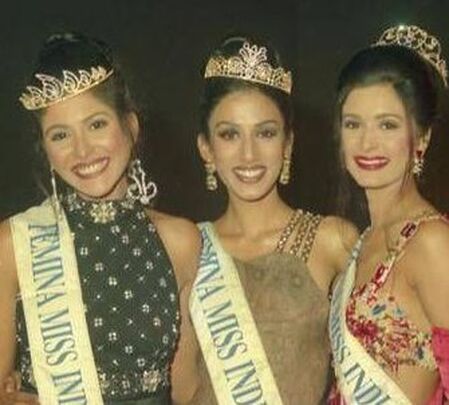 Beauty competitions have a tarnished reputation. Many view them as contrived and demeaning. But India's recent success in international beauty contests has thrilled many who would not generally take an interest in such events. The pageants are seen not as a form of sexual stereotyping, but as a challenge to the traditional constraints on Indian womanhood. ... :

You might not care much for beauty competitions. Millions in India do. The live broadcast of the Miss India contest on state-run television - stretched out over more than four hours - attracted the sort of viewing figures which other broadcasters can only dream about.

It's not that Indians are particularly lascivious. Though there is still a certain novelty in seeing Indian women besport themselves in beachwear. It's more a reflection of the enormous burst of adrenalin injected into Indian national life last year by the country's two top heroines - Sushmita Sen and Aishwarya Rai.

Sushmita - last year's Miss India- went on to win the Miss Universe competition. A bubbly Bengali woman still in her teens, her triumph did for India's self-esteem what the World Cup victory did to pep-up Brazil's pride. Then Aishwarya - the Miss India runner-up - took the Miss World title. No sporting analogy can adequately express the boost to national morale from such a formidable double.

I remember one battle-hardened woman journalist here - who I was sure would dismiss such triumphs as mere froth - beaming with delight, and boasting that Indian women had proved themselves a match for anyone in the world. Sushmita and Aishwarya made triumphal returns home. There were courtesy calls on Sonia Gandhi - Rajiv Gandhi's widow and the closes India has to royalty. Then tea with the president. And a photo-call with the prime minister.

I say this by way of extenuating my presence - alongside nine other judges, whose claim to celebrity status is rather more secure - at the Andheri sports stadium in Bombay last Saturday night. Twenty-nine contestants, bearing such titles as Miss Beautiful Eyes and Miss Congeniality, were battle for Sushmita's crown.

All the girls were above average - we were told - so no marks less than six. There was, perhaps, a certain uniformity among the finalists. Indeed, the top five were within two inches on every measurement the organisers saw fit to make public. [Indian cinema has tended to promote a fuller version of the female form than customary in the west. But the waif-like look is now well established, courtesy - no doubt - of the evil so widely blamed for India's travails, satellite TV.]

The contestants' skin tone was also pretty uniform. They were what would be described in the matrimonial columns here as wheatish in colour. There's still an enormous premium on having a fair skin. Mothers will openly lament that their daughters are just a little too dark - how difficult it will be to marry them off.

This distateful form of discrimination was no doubt buttressed during the colonial era. But it dates back thousands of years. When the Aryans invaded northern India, they chose the term 'wheatish' to describe their skin colour, in contrast to the 'dasa', the dark-skinned, whose once great culture they overthrew. To this day - in north India in particular - the higher Hindu castes are notably fairer than those from lower castes who live alongside.

It can't be pretended that the contestants represented every aspect of India. For one thing, all answered the obligatory questions in English. That straight away excludes all of village India. And four-fifths of urban India as well. Sushmita and Aishwarya - and now Manpreet as well, the new Miss India - are very much mascots of the middle class.

All three are also strikingly self-confident and articulate. Bimbos don't win Indian beauty contests these days - if they ever did. The ingrained conservatism which for generations has constrained Indian women to home and field is starting to shatter. Among middle class women in particular, there's been a revolution in attitudes. And India's beauty queens are encouraging a generation of young women to be more ambitious and determined, to challenge their parents' expectations, to see more to life than marriage, meals, and clothes for the kids.

At the Andheri stadium very late on Saturday, the outgoing Miss India addressed the crowd. After gushing expressions of love and gratitude to all, Sushmita Sen ended her brief peroration with the rallying cry of the Indian nationalist movement - the Hindi words which mean: "hail India". Almost as if she sees herself as some latter-day freedom fighter. Jai Hind.