Kuldip Nayar (1923-2018) was one of India's most distinguished journalists and columnists, a onetime diplomat, member of the Rajya Sabha and a longtime campaigner for peace and improved relations between India and Pakistan. His commitment to peace was in large part born out of his own experience as a refugee in the summer of 1947. He was born and brought up in Sialkot in what became Pakistan and walked across the new border into India just a few days after independence. He was part of a vast column of non-Muslims on the move, encountering equally huge caravans of Muslim refugees heading in the opposite direction.

The interview above was conducted on 14th August 1996 at Kuldip Nayar's home in Vasant Vihar in Delhi. 'One thing I never forget', he told me; 'it was just as we were nearing no man's land, finishing Pakistan and entering India. We were heading towards India. There was a caravan coming from the other side so they suddenly stopped - we also stopped. We didn't speak, but we looked towards each other with sadness. There was a strange kind of tension. We also had left our friends, homes, vocations behind; they too had left homes, friends behind. We both felt we had been borne on the wreck of history.'

I interviewed Kuldip Nayar again about his memories of Partition, at greater length, on 29th October 1996, again at his Delhi home. Here's the audio of that second interview:
A few days later, in early November 1996, I accompanied Kuldip Nayar to the Wagah border, made recordings there and interviewed him both at the border and later in Amritsar. The idea had been to travel back with Nayar to his home town of Sialkot - he was confident that he would get a visa - but the visa never came so we said goodbye in Amritsar and crossed over into Pakistan without him. The journey formed the basis of a very effective short TV film which Kuldip Nayar really liked.

​I am posting the audio here of some of the recordings made in Wagah and Amritsar - there's quite a lot of wildtrack as well as short interviews with Kuldip Nayar: 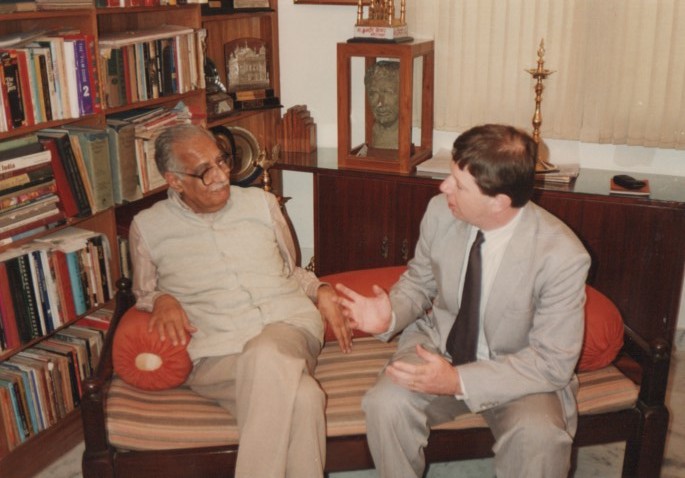 with Kuldip Nayar in Delhi, October 1996