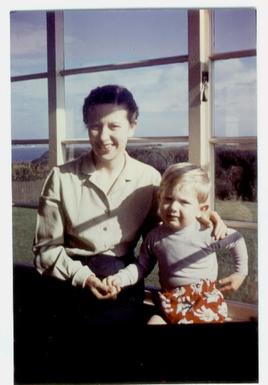 It's a pity about my shorts, and even more of a pity that I didn't keep my fair hair ... but this is a wonderful sunny memento of my childhood. Me as a toddler with my mother, Margaret Whitehead.

It was taken when on holiday at Hunmanby Gap - where 30 years or more later my parents lived and where my mother died - in, I'd guess, 1958.

Hunmanby Gap is a few miles south of Filey on the Yorkshire coast, and is blighted by severe coastal erosion. If you take a photo through the same window now, the sea will be a lot, lot closer.

There's still a cafe at Hunmanby Gap, clinging on at the top of the steps leading to a windswept beach. I remember going there as a toddler, and occasionally buying toys for the beach.

The cliff top walk keeps changing route as bits of it get swept down to become part of the beach, but it's a wonderfully bracing stroll. My mother died in August 2000, aged 71.
And here's another one of me as a young kid, exhibiting a dress esnse that some would say has stayed with me all my life: 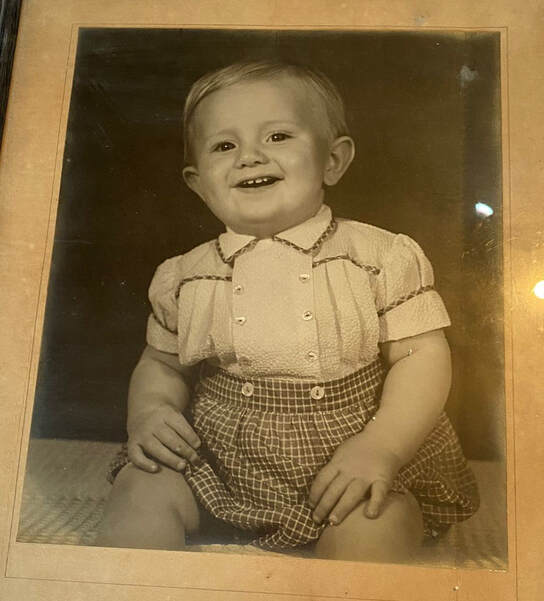 ​My father, the politician 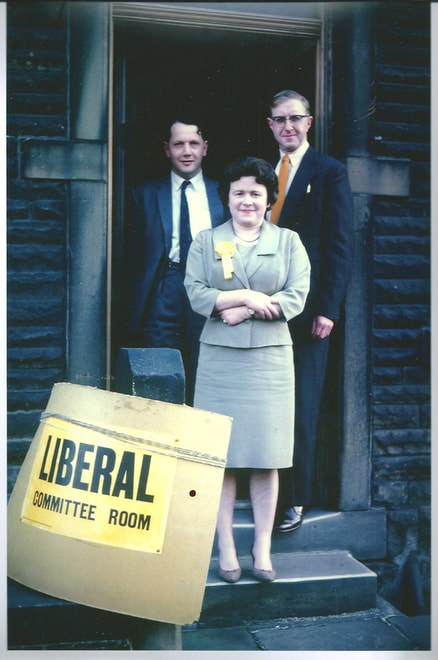 For a few years at the end of the 1950s and beginning of the 1960s, my father was a councillor - this was in Morley in West Yorkshire. This photo from 1963 dates from shortly after he came off the council, when he was still active in local politics.

My father was an Independent on the council, which usually in those days meant a Tory, but he was in fact a Liberal. In 1960, we moved just a short distance outside the Morley borough boundaries. So when his term ended - I think in 1962 - he wasn't eligible to stand for re-election. But he actively supported the Liberal candidate standing in his old seat - and here he is (back left), aged 38, at the Liberal committee room on Asquith Avenue in Morley. And yes, Asquith Avenue was named after the great Liberal Prime Minister of the early years of the last century - who was a Morley man.

I came across this photo by chance on the internet, though I have now bought a copy from the archive. The caption reads: May 1963. View of the Liberal committee room on Asquith Avenue for the election of 1963. The Liberal candidate, Frances Sowden, is seen in front with Arthur Whitehead and Trevor Sowden behind. Photograph from the David Atkinson Archive.

My father died on October 2016 just short of his 92nd birthday.

OK, so these are dated  but after this passage of time, rather wonderfully so (IMHO). The first photo was taken in August 1976 - so after my second year at Oxford - at Ingleton in the Yorkshire Dales, where I spent summers working on an archaeological dig. I had turned twenty a few weeks earlier.

The smarter, portrait photo was taken in Leamington Spa, probably in the first half of 1980, when I was 23 and approaching the end of my time as a postgraduate at Warwick. I wanted to get a 'proper' shot of me with long hair before I cut it off as I sought a job. In the end, I chickened out at the barbers - and my hair wasn't so much lopped off as trimmed. I still had distinctly long hair when I joined the BBC later that year. 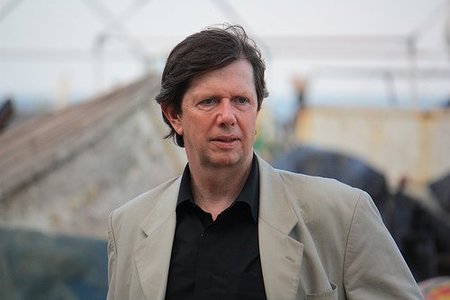 Photo: Steve Martin
For someone who doesn't usually scrub up too well for photos, this isn't at all bad. (Thanks to Steve!).

It was taken in May 2010 in the fishing harbour at Sekondi in Ghana. The boats had come in and unloaded their catch. They sold to a very assertive bunch of women - the fish traders. 'Who makes the most money?', I asked Kobe, the driver who took us to Sekondi. 'The fishing crews, or the women who buy their catch?' 'Oh, the women', he replied. 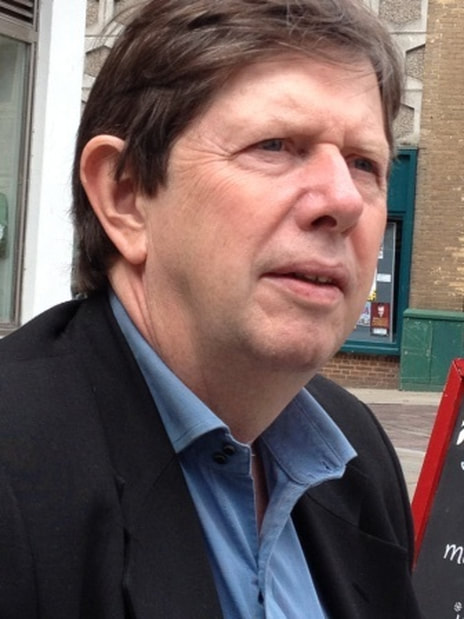 On a reporting mission in Kashmir 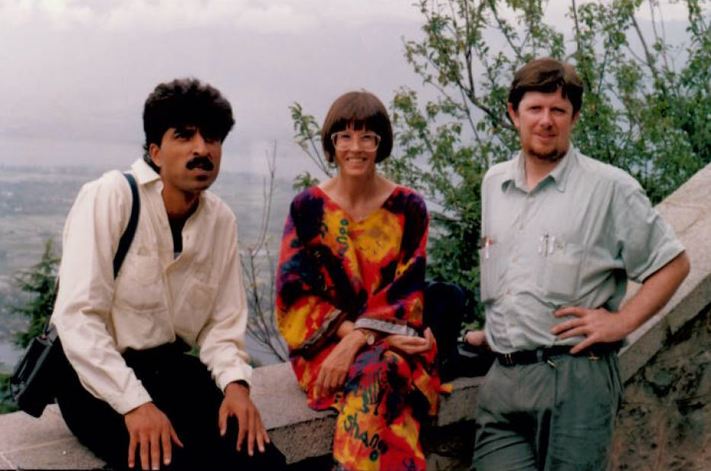 This was taken on Shankacharya Hill in Srinagar, as I recall - on my first or certainly an early visit to Kashmir. I guess it's from the summer or autumn of 1993.

I'm with my BBC colleague Elizabeth Blunt and the late Mushtaq Ali, a wonderfully warm man and fine photographer and camera operator. 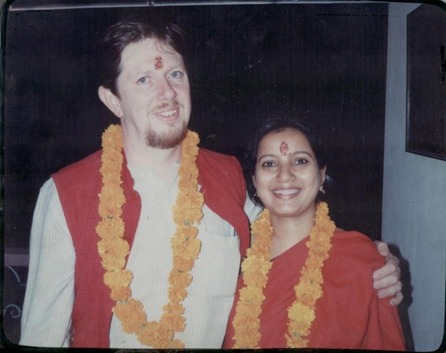 We had two Delhi weddings. This was after the first, as I recall. At Tees Hazari, a ramshackle court building, in October 1994. We later had a much more splendid wedding, with a Hindu priest - and a traditional, exuberant brass band on the eve of the ceremony, playing Bollywood badly. The smiles you see are a tribute to human resilience - and of course shared happiness. Tees Hazari was not a wonderful or romantic experience. The official who was to conduct the court wedding - not just for us, there were half-a-dozen other couples sharing the outer office - didn't return from lunch. We all sat and waited. And wondered, And waited a bit more.

Some of the others started to make a fuss. And after a while, all the happy couples and their witnesses and hangers on were led up staircases and along corridors to another room where a bureaucrat had reluctantly agreed to stand in for his absent colleague.

Just how reluctantly became quickly evident. Couples despatched without a smile. or with barely enough to repeat their vows before being ushered out into the world as man and wife. I had intended to read my vows in Hindi - but that would have taken quite a while, and would clearly not have amused the officiant, so it was a quick gabble in English. And the next one please.

The beard, by the way, was one of the early casualties of married life. Anu was set against it - and while she has tolerated a ponytail, and all sorts of other mild eccentricities down the years, the beard has not made a come back.

For my father's ninetieth birthday - he was born on 30th October 1924 - we put together a photo collage of his life. The earliest photo is of his parents' wedding in (I think) 1917 - the latest was from a stroll past his childhood home in Gildersome in 2014. 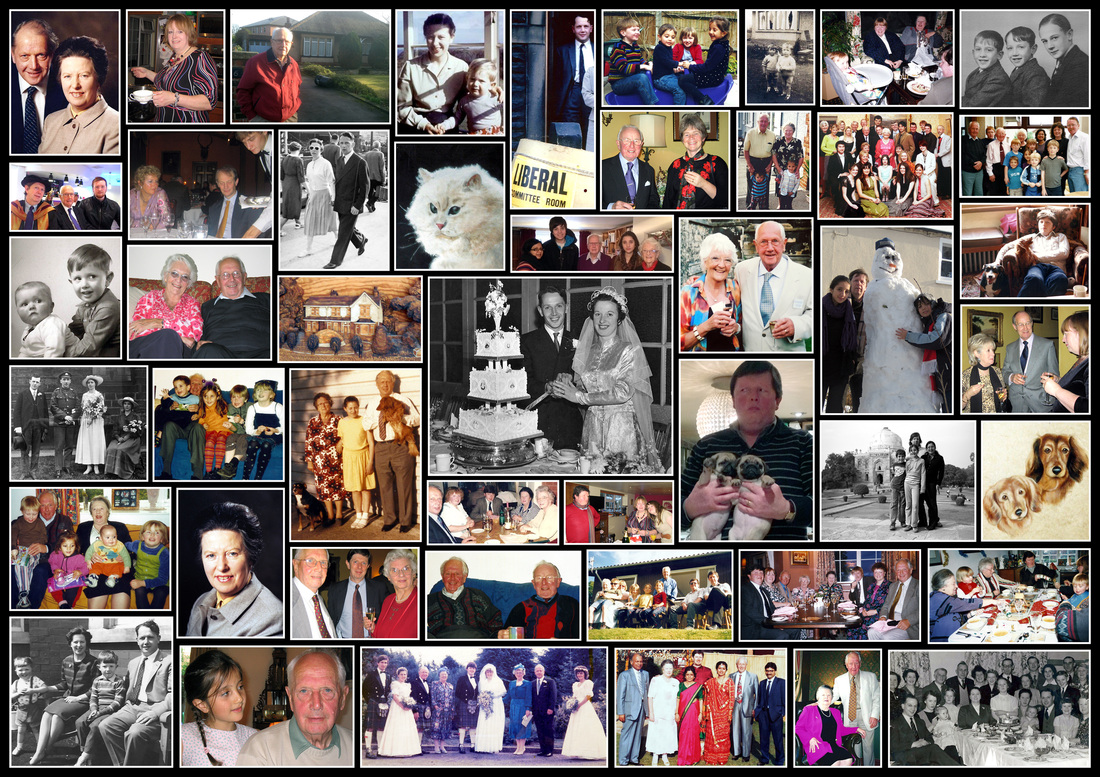 My nephew Michael took many excellent photos at the 90th birthday dinner - here's Dad and Betty with his two sons and their wives, and his four grandchildren. 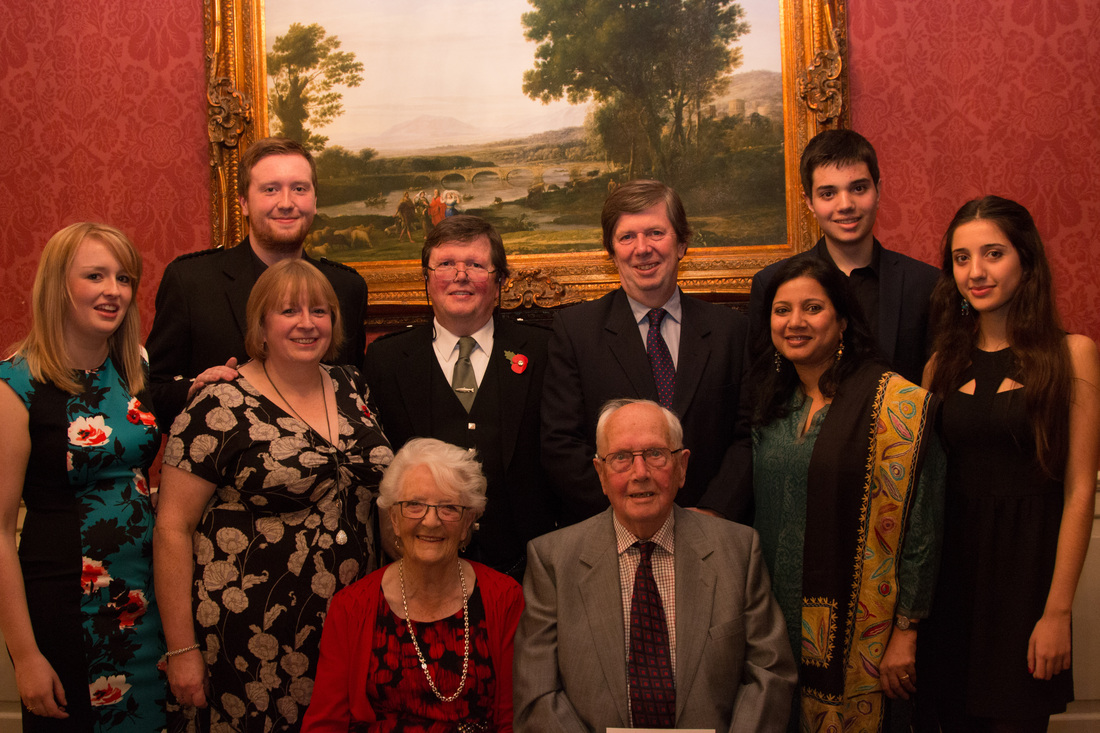 From the other side

Some wonderful photos from Anu's family - featuring one of her uncles, N.P. Tripathi, as a very young child, and taken (probably in Kanpur) in the 1920s. Mama-ji wrote down the circumstances of both photos, and those are included here. Sadly, he died in 2010.

Me and my friend 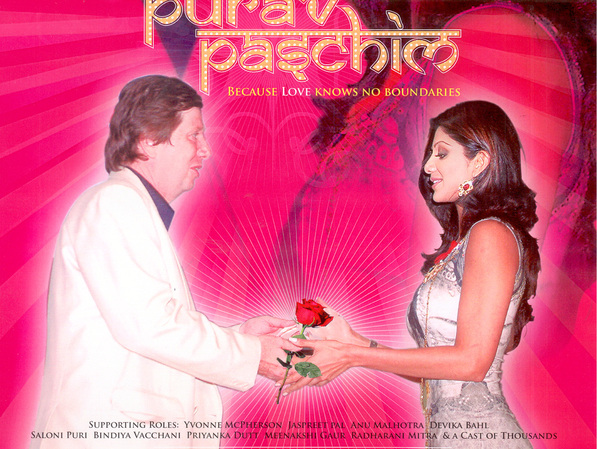 Yes, that is Shilpa Shetty.

And no, this isn't a photoshop job. Well, the rose is, but not the rest.

I can claim to be the person who (with a bit of help from Anu Malhotra - OK, quite a lot of help) introduced Shilpa to reality TV.

And this was a year or two before her brush with the loud mouthed Jade Goody on 'Big Brother', a row which did much to derail a Gordon Brown visit to India. 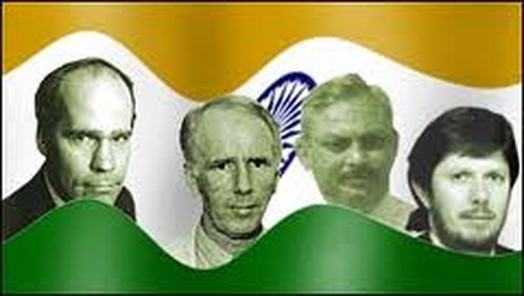 I came across this on one of those narcissistic web searches. It dates from 1999 - BBC publicity to promote coverage of that year's election in India. I am on the  right - and my comrades in arms are, from the left, Daniel Lak, Mike Wooldridge and Sanjeev Srivastava. I suspect the photos of all of us, and mine certainly, were already somewhat dated by the time this was put together.  My beard had disappeared by the mid-1990s.

'Voice for the World' 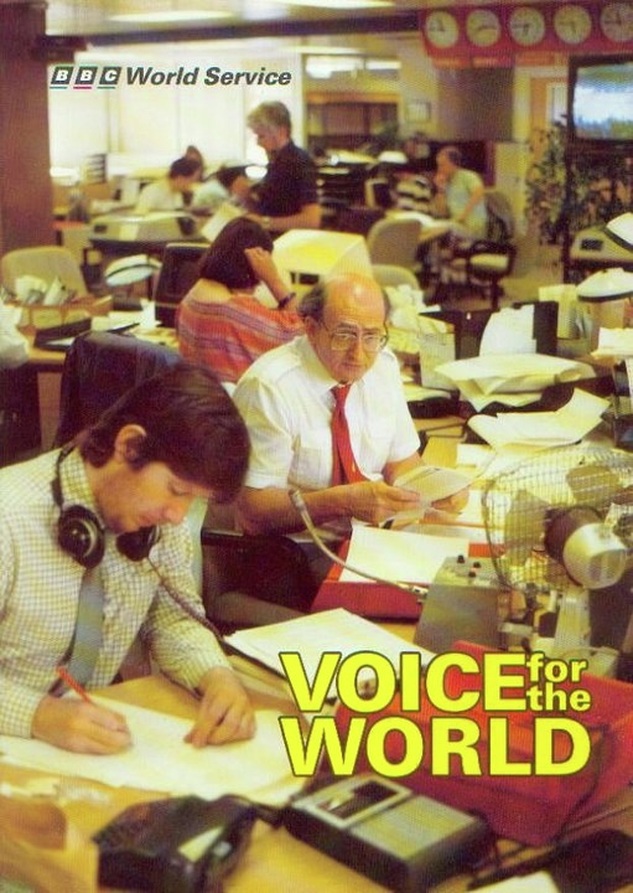 I am the World Service Chief Sub, in charge of the hourly nine-minute bulletins.

Gwyn Jones is the Senior Duty Editor telling me what's coming up.

Also in the picture, as far as I can make out, are Jonathan Birchall, Rita Payne, Luke Albarin (standing) and Ed Greene.

Rita was the central copytaster, sorting through the news agency copy. You can see some in the sorting box in front of her and on the regional copytaster's desk to her left.

Ed would have been Arabic Chief Sub on that day, and Jonathan was on the Africa desk. 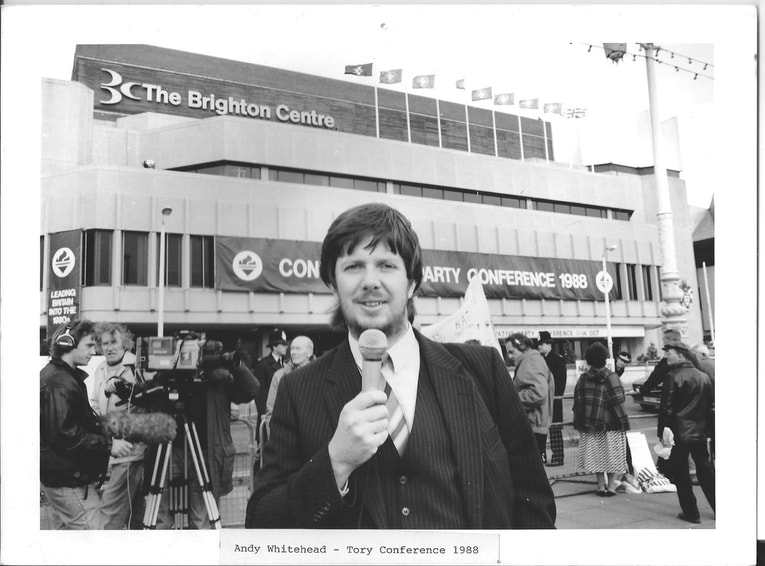 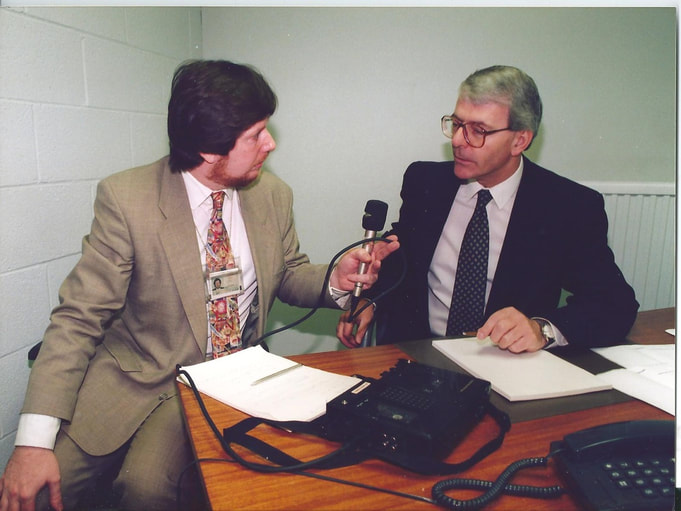 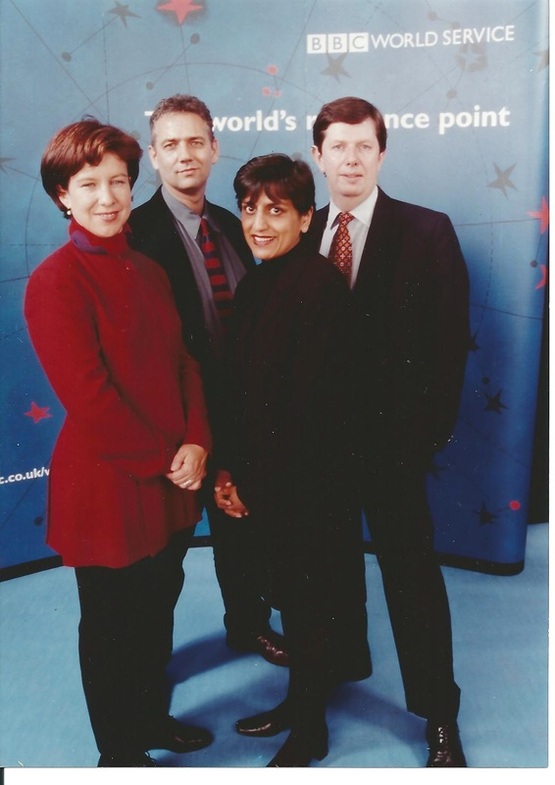 This photo dates back to January 1999, when the World Today went 'global', and I was one of the four presenters of the South Asia strand. This was a BBC publicity photo for the launch.

The four of us are - from left to right - Lyse Doucet, who has had a glittering career and is now the BBC chief international correspondent; George Arney, a hugely talented journalist and broadcaster who had earlier been the BBC's correspondent in Islamabad and Colombo; Ritula Shah, now presenter of the World Tonight on Radio 4; and me - I spent three years as a presenter and then became the programme's editor. Didn't we all look young!

The World Today closed in the summer of 2012 - to be succeeded on the BBC World Service by Newsday.

​I look back with fondness and pride on all that the World Today achieved - including (after my time) a Sony Gold for best news and current affairs programme. 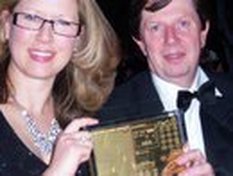 First time I'd ever worn 'black tie' in my life, but I can sort of get used to it if it keeps bringing us luck. Lucy Walker is the glam one in the photo - 'Newshour; had just won Sony Gold as the best radio News and Current Affairs programme of the year. I'm not one to brag, but World Service News got a brace of golds, a silver and a bronze. 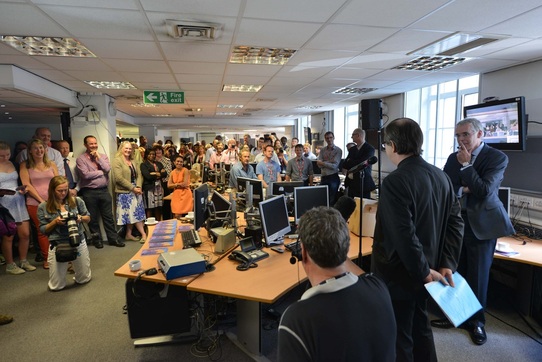 It was with a great sense of sadness, and of achievement, that the last ever World Service news bulletin from Bush House was broadcast at midday on 12th July 2012. There was quite a gathering - and these pictures by the BBC's Jeff Overs capture the event really well.

Helen Boaden, Peter Horrocks and I spoke briefly after the final bulletin - which was read by Iain Purdon -  and the picture on the left below is the view from the studio looking out on all those who had gathered to mark (or report on) the occasion.

This was not, of course, the end of the World Service - rather the last act in the BBC's 71 years in Bush House. World Service News teams are now based in the rather splendid extension to Broadcasting House in W1.

The Queen at BH

So this is from June 2013, when the Queen opened the new, extended Broadcasting House - and the canard that BBC journalists are a bunch of left-leaning Guardianistas was shot to pieces by an extravagant display of Royalist enthusiasm not seen since, well, for quite a very long time indeed.
​

In the footsteps of Freda Bedi

A more recent video from February 2016 - in which I am not the reporter (that's Navtej Johal of BBC East Midlands Today) but the interviewee as we set off round Freda Bedi's home town of Derby in her footsteps.

From the Video Archive

The three brief items in the video above all date from my time in Delhi in the mid 1990s: meeting and interviewing Nelson Mandela; a brief piece from the CPI (M) headquarters in Calcutta, in which my dress sense or lack of it and matching hair style appals even me; and an extract from a piece filmed in Bangalore. It all goes to explain, no doubt, why I have made my career in radio.