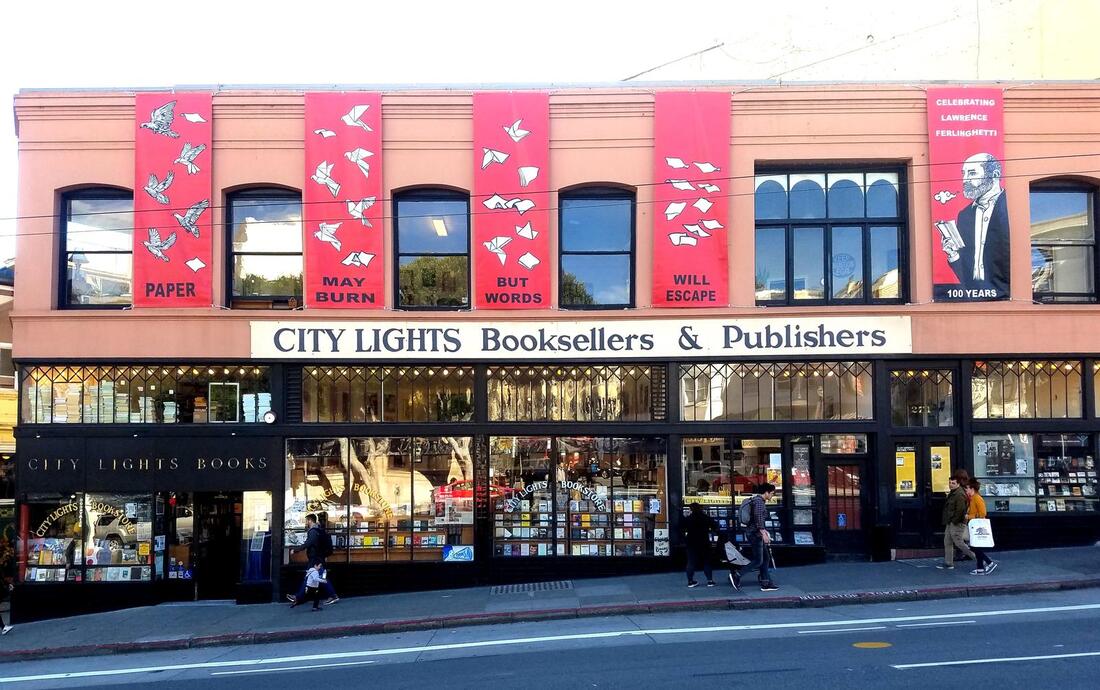 The city of San Francisco is home to some of the world's best bookshops, including one which specialises in obscure political tracts and another which has become synonymous with the Beat literary movement. Andrew Whitehead has visited both:

"City Lights is not just a bookstore, it's a church," one literary San Franciscan tells me. Describing the spiritual headquarters of the Beat poets - more Godless than God-fearing - in religious terms is the sort of discordant note you might get in... well, Beat poetry perhaps. But the comment was intended as praise, recognition of the store as a public space as well as a place of reverence.

City Lights has a fair claim to be the world's best-known independent bookshop. t was set up more than 60 years ago close to San Francisco's lively, bohemian North Beach district by, among others, the poet Lawrence Ferlinghetti.

Back then it was tiny, a beacon of the counter-culture, and made its name publishing Allen Ginsberg's long poem Howl - for which it was prosecuted for obscenity and acquitted - and championing the Beat movement also associated with Jack Kerouac, Gregory Corso and William Burroughs.

It has now taken over the entire block and is open until midnight every day of the week. It's the wonderful sort of bookshop that has easy chairs dotted around and signs inviting you to "sit and read".
​
Its stock is catholic, as befits a good bookshop. And if it's now a church, then the small room upstairs is the shrine - the shelves devoted to the Beats and to the poetry City Lights itself has published.

And the Beats? Well, some would say that, alongside rock'n'roll, they were about the most inventive aspect of America in the 1950s and early 60s. Rebellious, distinctly, disconcertingly, masculine. Tinged with booze, jazz, pills and dope. Given to freewheeling prose, iconoclastic verse and road trips.

Kerouac's On the Road is the Beat generation's best-known work - a novel I read as a teenager, and which so captivated me I've never dared to revisit it in case I find the magic has faded. So for me, browsing at City Lights is - oh dear, another religious term - a bit of a pilgrimage.

While the store and its rigorously organised shelves still fly the standard, it's a measured, late-middle-aged radicalism rather than the red-hot rage of youth. So that fits, too. The Beats began as an East Coast phenomenon - Ginsberg and Ferlinghetti were both from New York - and it found an enduring home on the other side of the country. San Francisco is America's "alternative" capital and it has been for decades.
Following in the Beats' footsteps came Haight-Ashbury and the hippy era. As the song says: "If you're going to San Francisco, be sure to wear flowers in your hair." The hippy movement was more about music and performance than literature, more overtly political than the Beat movement, and left - as far as I can tell - a less pronounced cultural mark on the city.
That 1967 summer of love embraced gay love. One consequence of the flower power influx was that San Francisco developed the liveliest gay scene in the country. Refugees from censorious parents and disapproving communities, those in search of anonymity or a new start, congregated here. The Castro, a former working class district, is a gay village which has become distinctly middle-aged.

This tolerant, laidback city has found its literary representation in Armistead Maupin's Tales of the City and its sequels - San Francisco not simply as venue but presiding genius. So one of the world's most digitally minded cities - where so many of the movers and shakers of Silicon Valley have made their homes - is also among the most literate. And it still offers sanctuary to the printed word. Printed not just in books, but on badges, leaflets, posters and pamphlets as well.

For collectors of old political pamphlets and ephemera - OK, so there aren't all that many of us, but this is a place for minorities of all sorts - San Francisco is paradise, in the shape of a cavernous upstairs second-hand bookshop in the almost-up-and-coming Mission district.

The shop, Bolerium, specialises in what it calls social movements - politics, civil rights, green issues, feminism, lifestyle. There are 60,000 items in all. The best selling lines, I asked? Gay pulp fiction, and American Trotskyism.

I assume there's not much overlap, but this being San Francisco you can't be sure. There are tracts and leaflets from all over the world. Regency radical squibs, high Tory manifestos, left-wing song sheets, right-wing election hand-outs.

It's amazing that such fragile items survive - amazing the prices the choicer items can now attract.
You might wonder who'd pay enough for a slap-up meal and a good bottle of wine to buy a Spanish Civil War-era anarchist handbill from the streets of Barcelona. Well, here's the answer - 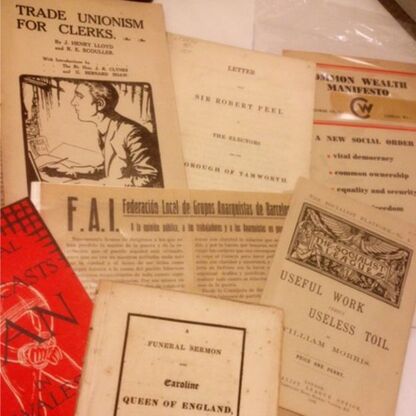 Part of my haul from Bolerium