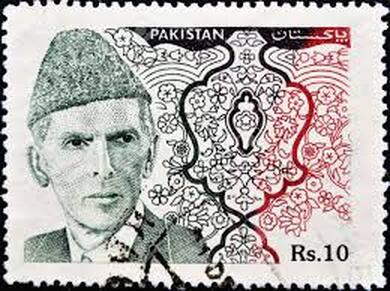 Later this year, India and Pakistan will be marking the fiftieth anniversary of independence - and many people in both countries will be reassessing the role of the founders of the two neighbouring nations. No figure is more controversial in South Asia than Mohammed Ali Jinnah, the man who - as head of the Indian Muslim League - successfully held out for a separate Muslim nation. Andrew Whitehead has been talking to Jinnah's associates and descendants and offers this assessment of the man and his lasting legacy.

His gaunt, thin lipped, unsmiling face features in every Pakistani currency note; on postage stamps; his portrait hangs in government offices; in shops and businesses. Mohammed Ali Jinnah, the Quaid-e-Azam, is revered as Pakistan's founding father. The man who through his strength of will and legal tenacity delivered on his promise of founding a sovereign nation for India's Muslims.

Almost half-a-century after he achieved the independence of Pakistan - carved out of the bloodied entrails of British India - his role and achievements cannot be openly questioned in that country. He is sacrosanct; a secular saint. His white marble burial shrine in Karachi is a place of quiet pilgrimage.

By the time Pakistan was created, Jinnah - a chain smoker - was dying of lung disease. He lasted a little more than a year into the post-colonial era - though long enough to see the partition of British Indian he advocated cost the lives of between two- and six-hundred thousand Hindus, Muslims and Sikhs and force one of the biggest migrations in history - ten-million people moved to and fro across the sub-continent within a matter of months.

He's a man of many contradictions. Kind, intelligent, indeed one of the best barristers of his day, he slowly came to believe that Muslims would never achieve full political and cultural equality as a minority within a Hindu-dominated united India. Yet the nation he created is now home to just one-in-three of South Asia's Muslims.

The Islamic Republic of Pakistan has not followed Jinnah's much more secular prescription. But the religious identity which was the country's foundation stone has eroded so greatly that even the muhajirs - the main champions of Pakistan, those who migrated from across North India to their new homeland - now place ethnic identity above religion.

Jinnah was one of the few nationalist leaders who never went to jail. He was not observant and indeed had a liking for sherry and pork sausages. He was a Muslim who married outside his religion - his glamorous, much younger wife was a Parsee. Yet when his daughter also married a Parsee, he made clear his deep disapproval. He lived much of his life in Bombay. When at partition he locked up his mansion on Bombay's Malabar Hill to head for Karachi and the post of Pakistan's first Governor-General, he asked that the house be kept ready for his return.

Curiously, not one of Jinnah's direct descendants has ever chosen to settle in the nation he founded. His daughter, an only child, is still living - in New York.His one grandson is in Bombay - the head of an India-based business empire.

That grandson has never seen Jinnah's burial place. Indeed, he's been to Pakistan just once. By accident. Flying out from Bombay back to school in Britain forty years ago, the plane he was on developed a technical fault, and made an unscheduled touchdown in Karachi.

When Pakistan celebrates fifty years of independence in August, it's unlikely that any of Jinnah's direct descendants will be at the ceremonies.

Jinnah's grandson says he's proud of his forbear and believes he has been unfairly maligned. If in Pakistan Jinnah is above criticism, in India he has been demonised.The government sponsored films looking back at the independence period paint Jinnah as at best intransigent and, at worst, evil. The man who undid Mahatma Gandhi's campaign for communal unity.

It's difficult to reconcile that with the accounts of Jinnah's friends and colleagues. They talk of a shy man with a formidable intellect, a sophisticate who enjoyed good food. Of a man whose life was marred by anxiety and ill-health, and overshadowed by an unsuccessful marriage and the early death of his wife.

He remains one of the most enigmatic personalities of this century. There will, in the course of this year, be much soul-searching about whether partition fifty years ago really was the best solution. Much apportioning of blame.

That's for others to do. What can be said with confidence is that Mohammed Ali Jinnah changed the map of the Indian sub-continent. And tens of millions of people are still living with the consequences of an independence settlement he helped shape.
​