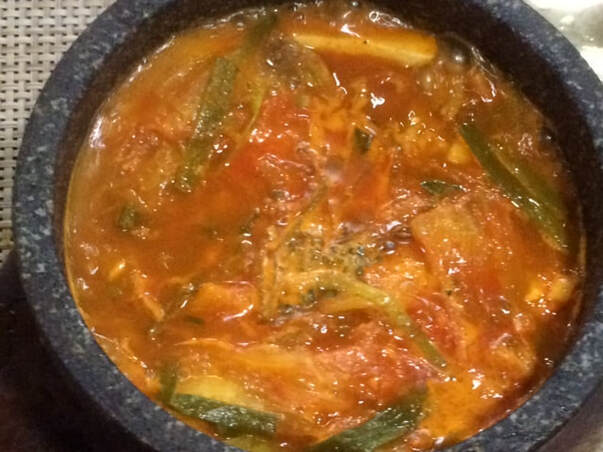 Andrew Whitehead [a former BBC India correspondent] spends time every year in Chennai, the port city once known as Madras. Recently he came across a newly-established community which now describes itself as the most numerous expatriate group in this corner of South India:

Sriperumbudur is not the sort of spot you expect to be served kimchi, a fermented cabbage dish which is a world away from the Tamil staples of dosas and iddlis. It’s a sleepy, non-descript town where cows and goats mosey among the vegetable stalls. If the rest of India has heard of the place, it’s because Sriperumbudur is where Rajiv Gandhi, India’s former prime minister, was blown-up by a woman suicide bomber. An impressive memorial park, whose main feature is an unsettling mural depicting the moment the explosives detonated, attracts a steady stream of visitors.

The town is an hour out of Chennai on the main road to Bengaluru - Madras and Bangalore, as South India’s principal cities were known when Rajiv Gandhi made his ill-fated campaign stop. Not many visitors to his memorial bother to come in to the town centre. Perhaps they should. Slightly hidden on a driveway off Gandhi Road is an elegant, newly-built hotel. “Can I have lunch here?” - I asked the receptionist. “Sorry”, he replied. “But you have a restaurant – isn’t it open?” “Yes, it’s open - but, you see, we only serve Korean food”.

Having reassured him that that would do just fine, I was shown into a small, functional eating room. Most of the tables were taken by clusters of blue-shirted young and middle aged men, interspersed – this was a Saturday – with a few family groups. A Korean TV channel was playing. As far as I could tell, I was the only non-Korean. I wasn’t familiar with the cuisine but the waitress, Korean of course, guided me through the menu and I ate splendidly.

The Kyung Joo hotel – Hotel Crystal Towers according to its English language signboard – has been open for seven years. Ninety per cent of the customersare Korean. Most work at or have links with the massive Hyundai car plant on the outskirts of town. This opened in 1999, eight years after Rajiv Gandhi’s assassination; the South Korea-based multinational is now India’s second biggest car maker. One-in-six of all new cars sold in India are made here. Buoyed by Hyundai’s success, Samsung and many other Korean businesses have set up shop in South India.

The Korean presence is discrete. But if you look out carefully as you travel along the national highway, you can spots shops with signs in the distinctive Korean alphabet. In Chennai, the South Korean consulate takes up an entire floor in a high-rise office block in one of the smarter parts of the city. The consul-general says there are now five-thousand Koreans and three-hundred Korean firms in and around Chennai – the largest ex-patriate community in the area.From my city centre flat, a Korean restaurant, Korean hotel, Korean bakery and Korean café and gift shop are all within walking distance.

At first, I suspect, Koreans coming to work here for a year or two counted down the days until their return home. There’s still not a lot of mingling between Koreans and localMadrasis, but a centre has been established to encourage dialogue between the cultures. You can take lessons in the Korean language, join a Korean dance troupe – and if you are Korean, there are courses in Tamil cuisine and Indian spirituality as well as treks and fishing outings.

Once, the port of Madras was an important trading post with links to South-East and East Asia. Between the world wars, the sea lanes east across the Bay of Bengal were among the world’s busiest migration routes. If you look hard, you can still find an imprint of that – in Chennai’s ‘Burma’ market, in the small Chinese community, particularly prominent among the city’s private dentists. The Korean presence is, in a way, a rekindling of those ties.

But things aren’t always as they seem. Having decided I quite like Korean food, I called in on my local restaurant – take it from me, the soft-shell crab is wonderful. The Korean proprietor told me she’d been based in Chennai for eleven years – though she’s picked up little Tamil or indeed English. I asked the waiting staff how long they had been in India. They smiled awkwardly. They weren’t Korean at all, but from the remoter corners of India’s north-east –Mizoram, Meghalaya and Nagaland - where many people look more East Asian than South Asian. And the kitchen staff – are they also from the north east? Oh no – not at all, I was told; they’re from Nepal.
​
How’s that for cultural crossover.
​