This article was written at the beginning of 2011 and included in the Five Leaves anthology Maps, edited by Ross Bradshaw and published later that year. The map below is taken from Arthur Morrison's 1896 novel, A Child of the Jago. 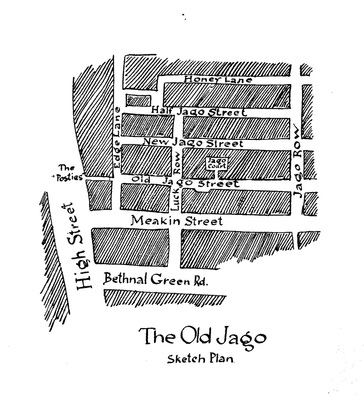 Few alleys live up to their name as well as this one. Boundary Passage once gave precarious access to a concealed world. From the naptha lights, the stalls, the relative abundance of Shoreditch High Street, this stub of an isthmus – barely a speck in even the most compendious A-to-Z – was the entrance to the Old Nichol, one of late Victorian London’s more ill-famed slums.

The passageway still has a hint of the sinister. The walls are high and grimy. It’s studded with posts, apocryphally once cannons in Nelson’s navy. Arthur Morrison would recognise the place. In his classic novel A Child of the Jago, he rechristened the alley as “The Posties”. It is described in the opening page: ‘off Shoreditch High Street, a narrow passage, set across with posts, gave menacing entrance’ on the criminal slum he depicted. ‘What was too vile for Kate Street, Seven Dials, and Ratcliff Highway in its worst day, what was too useless, incapable and corrupt – all that teemed in the Old Jago.’ “The Posties” was the route taken by slum boys lifting from the stalls and running for home ground – the path of more professional villains in search of a fence – the limits of where police would patrol other than in pairs. Both passage and boundary.

Morrison prefaced his novel with a street plan - a fictional but precise mapping of his ‘Jago’ on the lay-out of the Nichol. Only the names changed. So Boundary Street, at the inner end of the passage, became Edge Lane. Morrison sought to assert the truth of his account by this faithful rendition of its street map and the clear echo of the original in his street names. But the one has subsumed the other.  The ‘Jago’ is now better known than the Nichol. There is, not far away on Great Eastern Street – not quite in Morrison’s catchment area – an up-market clothes joint entitled ‘A Child of the Jago’. Cheekily, it has trademarked the name as what it calls a ‘cult brand’ and, as I write, has its ’Jago Navy Slub Stripe Coat’ on special offer at £619.

By the time Arthur Morrison’s novel was published in 1896, the slum had largely disappeared.  It was torn down in one of the first clearance schemes of the London County Council. The solid, dour Boundary Estate was built in its place. At its heart, wonderfully but incongruously, is the grandest bandstand in the city, Arnold Circus – said to have been built on a mound of rubble from the demolition. The estate endures. A children’s playground is reputed to mark the spot of a slum church which in turn was built on the Nichol’s (or is it the Jago’s) most fetid and insanitary courtyard.

When I first started walking round the area – prompted by Morrison’s novel – cheap furniture and veneer workshops still spilled onto the pavement nearby on Redchurch Street. The area had a down-at-heel feel aggravated by the dereliction on its edges, though the substance of the mansion blocks and a tolerably spacious design allowed it to escape the soulless monotony of so many of the East End’s twentieth century estates. Much of the estate remains social housing, with a large Bangladeshi community. But an inner-city location so close to the cultural hotspots of Shoreditch and Hoxton was bound to become fashionable. A brace of estate flats knocked through to make a more spacious apartment now sell for £600k and more. After all they are, in a local estate agent’s parlance, ‘close to the galleries, cafes and boutiques of Redchurch Street and Brick Lane’, where you find what were once pubs selling dishes such as salt-cured duck with kale and spiced brown shrimp butter.

Some of the old livelihoods of the area have found new life, more coincidence than continuity. Today the second-hand clothes shops are not last resort, but a first call for those seeking a retro look. The woodworking tradition is represented at the top end of Brick Lane by a shop-cum-workshop promising ‘local craftsmanship at mass production prices’ with edgy design and a young clientele.

Boundary Street itself has had the most remarkable makeover. A Terence Conran takeover. As you come out of Boundary Passage, and look ahead and to the right – look closely, though, for the luxury is not immediately on view -  there’s a warehouse that’s been converted into twelve top-end hotel rooms and suites, three restaurants and a rooftop bar. And there’s more. From a vantage point between the posts, on your immediate right stands (and I’m quoting from their design agency) a ‘chic boutique’. On the left, an old cream and green tiled local pub is now the street-smart office of a creative agency. Its mission statement reads uncannily like twenty-first century speak for Morrison’s literary purpose: to ‘harness gritty stories and experiences to educate, inspire and unlock the true potential of young people’.

At the other end of the passage, the matching section of the high street has not fared so well. It’s stuck in a no man’s land between the bright lights of Liverpool Street station in one direction, and in the other the galleries and delicatessens clustered round Shoreditch Town Hall. This stretch is blighted by buildings so drear they defy any attempt at gentrification. Where Shoreditch High Street meets Boundary Passage stands a sports bar and gentlemen’s club, with a gaudy red neon sign which contradicts its name: ‘Rainbow’.  Even in the seamy world of strip joints, this looks sad. ‘Our girls at rainbow’, says the club’s website, aimed at VIP customers and stag nights (not easily reconcilable, surely), ‘are very friendly and like to get to know you as well as dance and teas [sic] you’. The style and the money are now on what was the slum side of the passage. It’s the High Street that feels drab and decayed. The social geography of the ‘Jago’ has been turned inside out.

The marvel is that Morrison’s “Posties” survive. Every time I venture into this ‘farther part of Shoreditch’, I imagine demolition gangs will have brought low this last evocation of the area Arthur Morrison wrote about. Every time, I rejoice that it’s still there – squat, undistinguished, but a tangible link with a commanding piece of literature and the London it represented. The historian Sarah Wise, author of The Blackest Streets, has argued that Morrison demonised the neighbourhood, partly for literary effect but also echoing his main informant, a self-publicising High Church cleric who sought to tame the Nichol. The novel was dedicated to this clergyman, and he appeared in its pages as a heroic figure. Yet novels create their own reality. Even those who grew up in the Old Nichol at times found it difficult to disentangle their childhood memories from the legend Morrison nurtured. More than any other London slum novel, A Child of the Jago has defined as much as depicted the locality in which it was set.

Here's a link to Sarah Wise's contribution on A Child of the Jago on the London Fictions website. 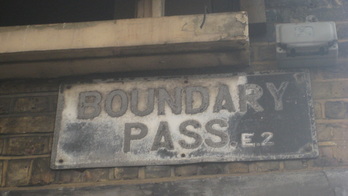