Includes letters from John Stuart Mill and Robert Owen.
George Edwin Harris was one of the more active and independent-minded of the O'Brienites, noted particularly for his involvement alongside Karl Marx in the International Working Men's Association, but also a contributor to O'Brienite-minded journals and a committed internationalist. At various times in his life he was a tailor, a bookseller and a clerk. Unlike his good friend and political ally Martin Boon, he was not a pamphleteer - and perhaps because of that, he has attracted little detailed attention.

In 2015, I bought second-hand a bound copy of The Working Man for 1862-3, with Harris's ownership signature and various markings in the margins indicating his authorship of articles written anonymously or pseudonymously. I blogged about that - and particularly Harris's account of welcoming the Russian anarchist Mikhail Bakunin to London. Eighteen months later, that prompted Harris's great-great-granddaughter to get in touch - and I have now acquired Harris's personal papers. There are perhaps sixty or so letters or draft articles - including copies of a few letters from writers and politicians of distinction (Garibaldi, Mazzini, O'Brien, Hugo, Blanc) which had been sold at auction.

The manuscripts include letters or notes from John Stuart Mill, Robert Owen, Ernest Jones, Charles Bradlaugh, Eleanor Boon and Josiah Warren among others. There are notes which refer both to Carl [sic] Marx and to Engels, and letters from the US which tend to bear out Marx's suspicion that Harris was in touch with a libertarian-minded section of the IWMA in New York.

Over the next year or so, I will list, annotate and research these letters, and will post a fuller account of Harris's life and political activity - all I can do here is to give some idea of the gems among these papers.

And how remarkable that in 2016, the papers of a leading radical political figure of 150 years earlier have come to light for the first time. As far as I am aware, they have never been consulted or cited by any historian or researcher.
​

... a letter from John Stuart Mill

Harris has apparently written to Mill to ask him to attend an event to celebrate the life and political career of the French revolutionary, Robespierre - whose admiring biography O' Brien had written - 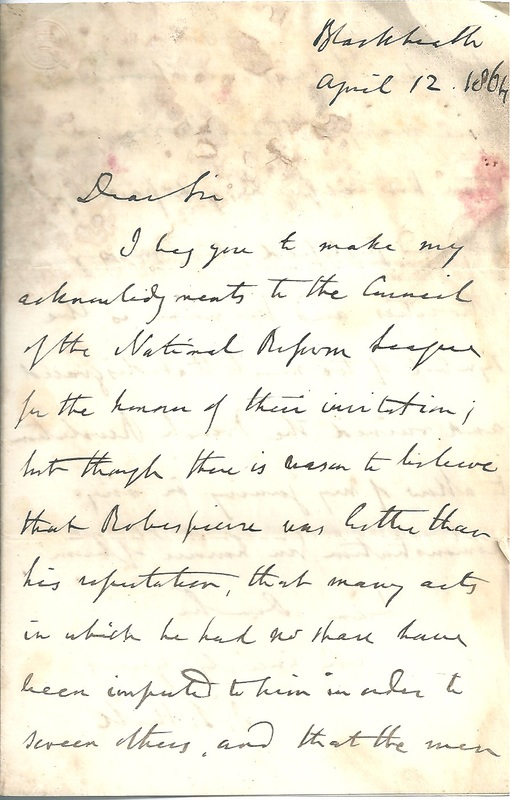 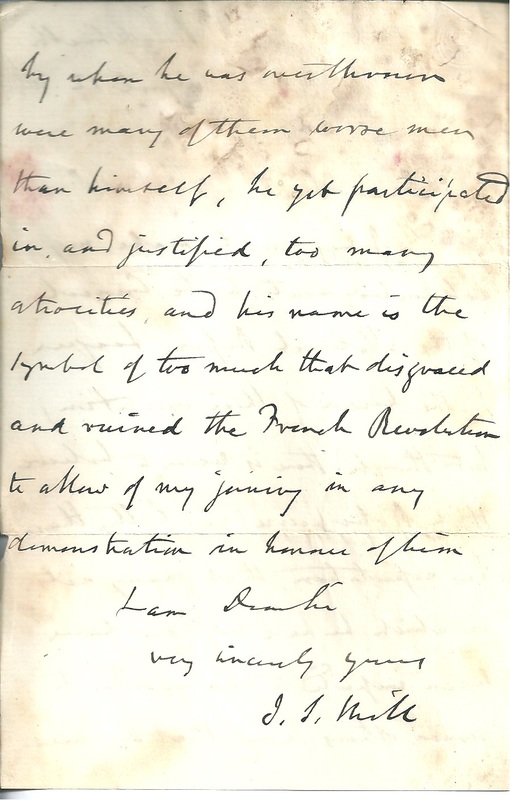 Mill replies: 'I beg you to make my acknowledgements to the Council of the National Reform League for the honour of the invitation; but though there is reason to believe that Robespierre was better than his reputation, that many acts in which he had no share have been imputed to him in order to screen others, and that the men by whom he was overthrown were many of them worse men than himself, he yet participated in, and justified, too many atrocities and his name is the symbol of too much that disgraced and ruined the French Revolution to allow of my joining in any demonstration in honour of him.'

Harris sent what appears to have been a similar invitation to honour Robespierre to Victor Le Lubez, a young French emigre who persuaded Karl Marx to get involved in the IWMA. Le Lubez's reply stands in marked contrast to that of Mill: 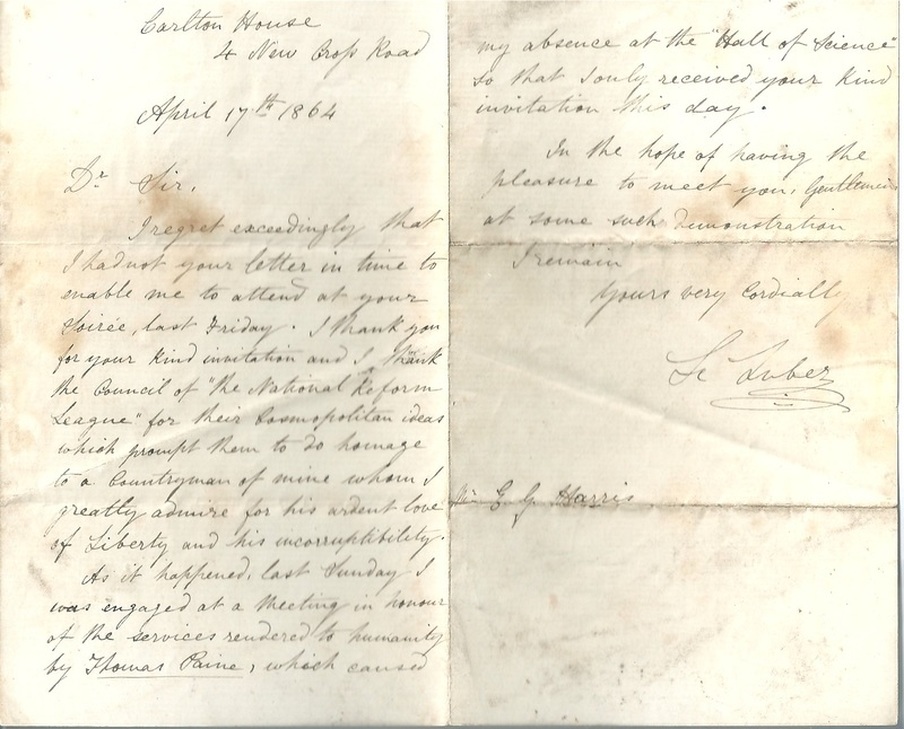 Le Lubez writes: 'I regret exceedingly that I hadn't your letter in time to enable me to attend at your Soiree, last Friday. I thank you for your kind invitation and I thank the Council of "the National Reform League" for their cosmopolitan ideas which prompt them to do homage to a countryman of mine whom I greatly admire for his ardent love of Liberty and his incorruptibility. / As it happened, last Sunday I was engaged at a meeting in honour of the services rendered to humanity by Thomas Paine, which caused my absence at the "Hall of Science" so that I only received your kind invitation this day. / In the hope of having the pleasure to meet you, Gentlemen, at some such demonstration.'
​

... a note from Charles Bradlaugh

A brief handwritten note from Charles Bradlaugh, a leading figure in Victorian radicalism, the most prominent freethinker and Republican, and from 1880 until his death in 1891 an MP for Northampton 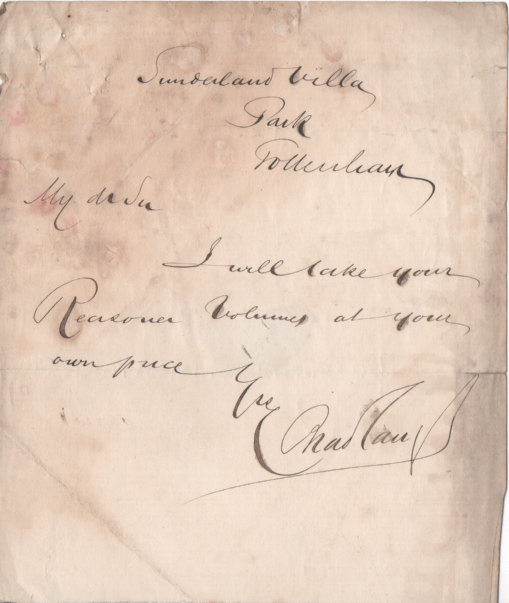 Bradlaugh appears to be arranging to buy from Harris bound volumes of ​The Reasoner, a freethought journal established by George Jacob Holyoake in the mid-1840s which continued publication into the 1870s

One more indication of the wealth of Harris's political contacts - a letter from Robert Owen in 1852: 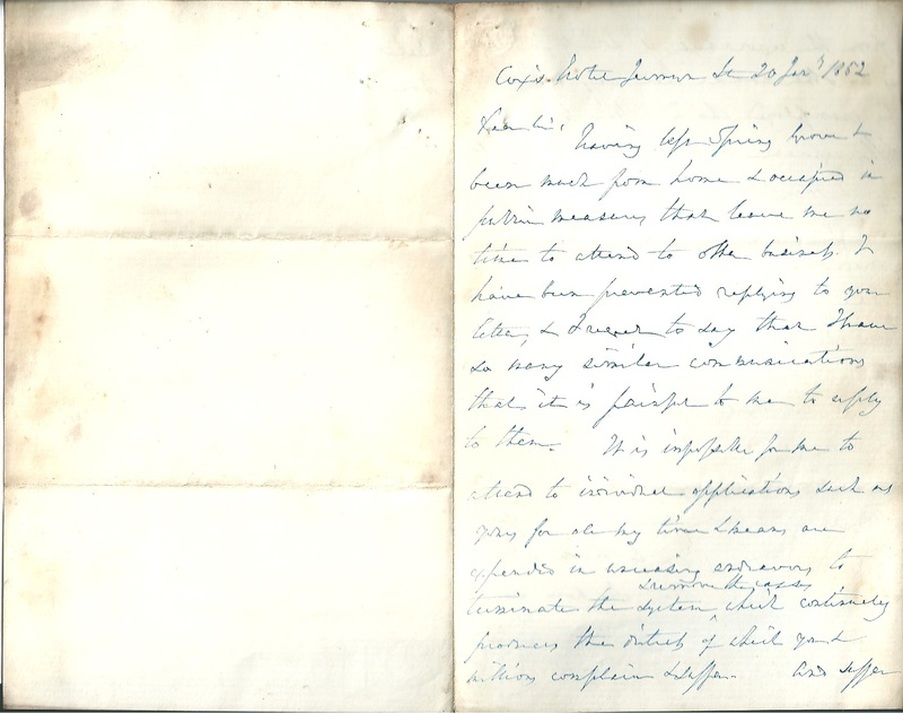 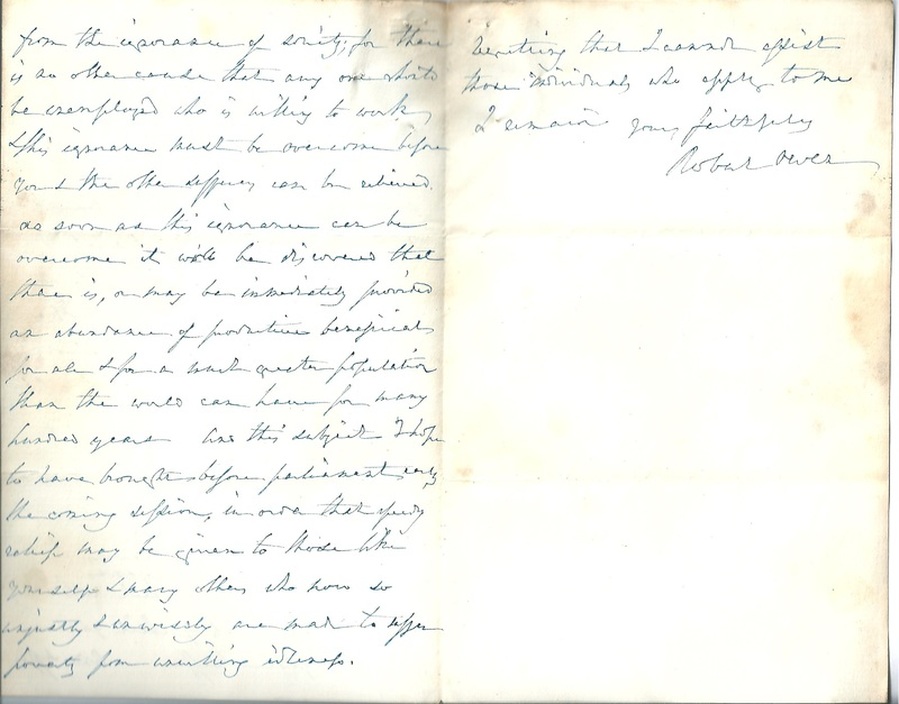 'Having left Spring Grove + been much from home + occupied in public measures that leave me no time to attend to other business. I have been prevented replying to your letter, + I regret today that I have so many similar communications that it is painful to me to reply to them.
'It is impossible for me to attend to individual applications such as yours for all my time and means are expended  in unceasing endeavour to terminate the system + remove the causes which continually produces the distress of which you + millions complain + suffer.
'And suffer from the ignorance of society; for there is no other cause that anyone should be unemployed who is willing to work + this ignorance must be overcome before you + other sufferers be relieved. As soon as this ignorance can be overcome it will be discovered that there is, or may be immediately provided an abundance of production beneficial to all + for a much greater population than the world can have for many hundreds years. And this subject I hope to have brought before parliament early the coming session, in order that speedy relief may be given to those like yourself + many others who now so unjustly + unwisely are made to suffer poverty from unwilling idleness.
'Regretting that I cannot assist those individuals who apply to me.'
... two letters from Eleanor Boon
Martin Boon - there's a full biographical note here and blogs including photos here - was a fellow O'Brienite and a collegue of Harris on the General Council of the International Working Men's Association. Early in 1874, Boon emigrated to South Africa, leaving behind his wife, Eleanor,  and their children. One assumes he wanted to make his way in his adopted country and then send money for his family to join him - which eventually they did. These two letters from Eleanor to George Harris demonstrate how difficult she found life without her husband's support and income.
​The earlier of Eleanor's letters was written from her home in Croydon on 30th January 1874, very shortly after her husband's departure:

​  ​'I was glad to hear from you + Mrs Harris + daughter.  Many thanks for all your good wishes - I dare say you felt the parting with my dear husband very much. I assure you my life at present is one of loneliness and great anxiety. I do not expect any news from Martin for another five or six weeks. I will let you know immediately I hear from him.
'I thank you much for conveying the letter to Mr Mottershed  he replied and sent me £1- It just came in time for I am dreadfully pinched for means. A few pounds have been subscribed by friends and forwarded by Messrs Rogers & [mark unclear] and really had it not been for this I do not know how I should have got on for poor Martin only left me a few shilling, and all the taxes have come in but with a little pinching I have managed so far.
'Mr Mottershed wrote a rather peculiar letter, he informed me that "I had no occasion to have reminded him of the small debt, as he was troubled with a conscience and always payed [sic] just debts, but as I pleaded (here came in some Latin) which I do not pretend to) however I suppose he meant to say as I pleaded misery + poverty so strong he felt compelled to send something which his troubled conscience would have made rather later had he not heard from me so soon. - Do you know I should rather like to see this gentleman. I fancy he is rather comical or else very thin-skinned but I hope for the sake of his own feelings that he is not the latter for he may not relish my letter in reply - as you know I always speak my mind - Evidently he is very busy putting every thing in good order at Preston - I hope our Nation will not forget to put monuments to the memory of these industrious gentlemen - Oh by the by he stated in his letter he well knew what it was to leave a wife and young children - I told him I hoped he always left her provided for - However, you will excuse my little fun about this gentleman. You and I understand each other on these points, but to be serious - The Bread + Butter question once more arises, my means are nothing, I have a beautiful Rocking Horse worth £2 - 5 - now could it be raffled for do you think? How degraded I feel myself asking these things, to think I should ever come to this - I wonder if there are any more troubled consciences who might put down a shilling each in chance for this beautiful horse  Write and tell me what you tink - You know once there was a "Blanket" to be raffled for a much grander scheme + purpose.
'Adieu - Love to Mrs. Harris + daughter'
​ 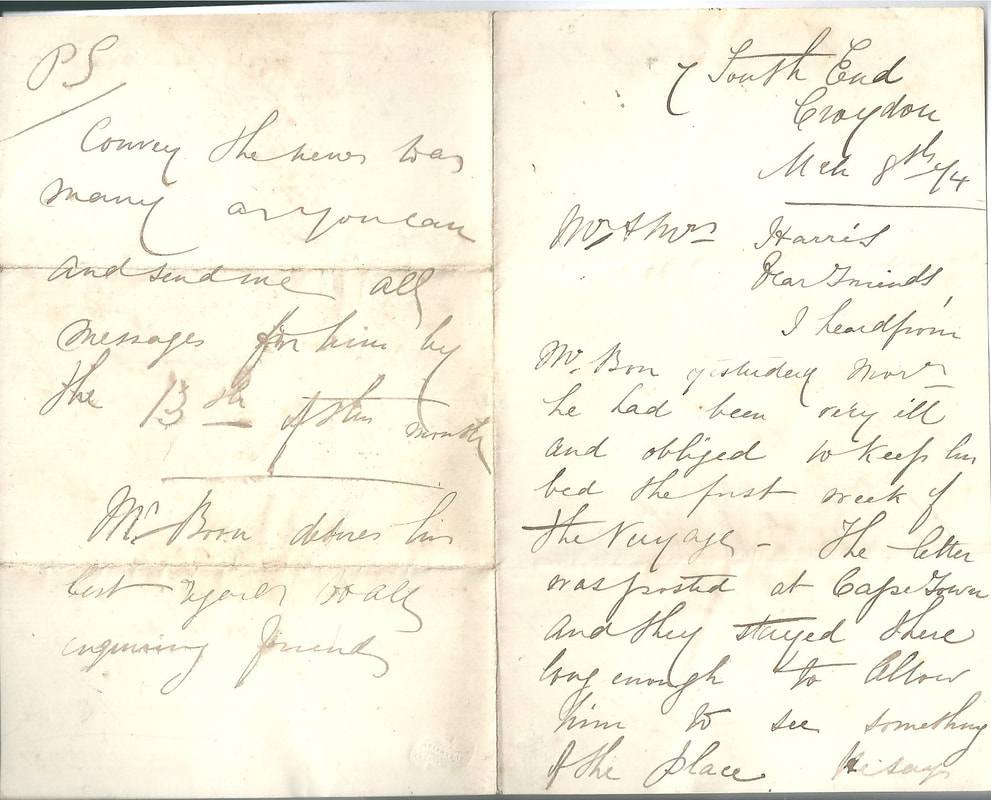 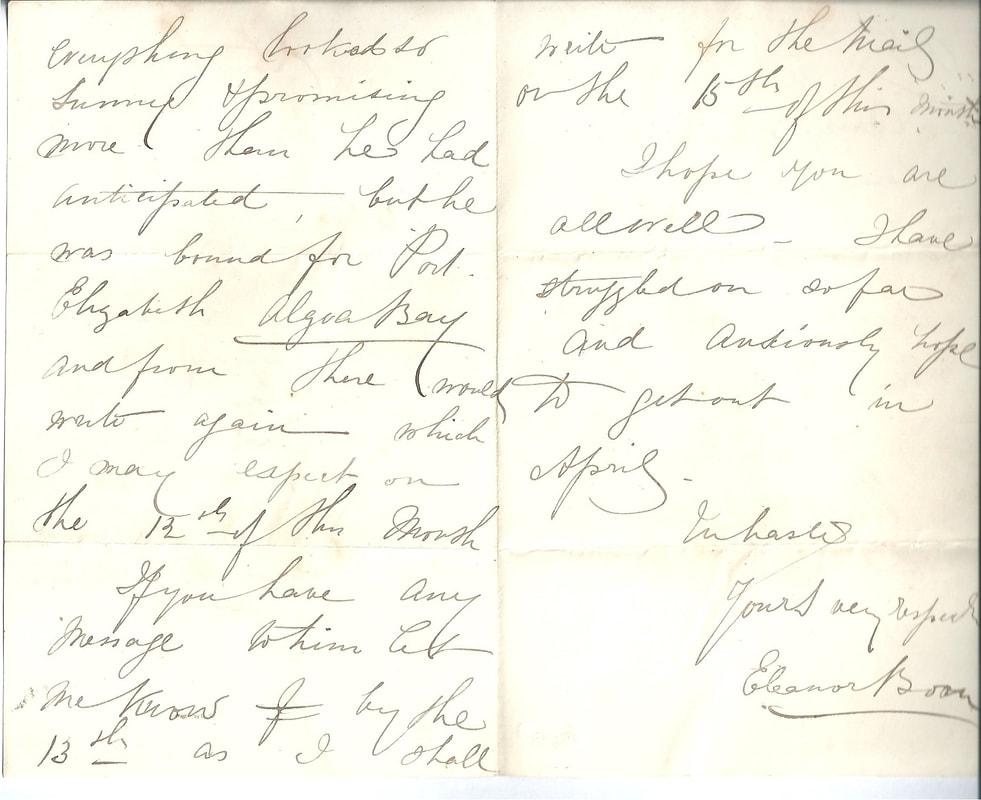 The second letter from Eleanor was written five or six weeks later, by which time she had heard from Martin, newly arrived in Cape Town

'I heard from Mr. Boon yesterday morn[in]g- he had been very ill and obliged to keep his bed the first week of the voyage - The letter was posted at Cape Town and they stayed there long enough to allow him to see something of the place. He says everything looked so sunny + promising more than he anticipated, but he was bound for Port Elizabeth Algoa Bay and from there would write again which I may expect on the 13th of this month
'If you have any message to him let me know by the 13th as I shall write for the mail on the 15th of this month
'I hope you are all well - I have struggled on so far and anxiously hope to get out in April. ...
'PS Convey the news to as many as you can and send me all messages for him by the 13th of this month
'Mr Boon desires his best regards to all enquiring friends'