OK - some something new - political tokens: these could be medals, admission tokens, donation receipts, ha'penny tokens ... all sorts of things, in metal or card. Take a look:
​ 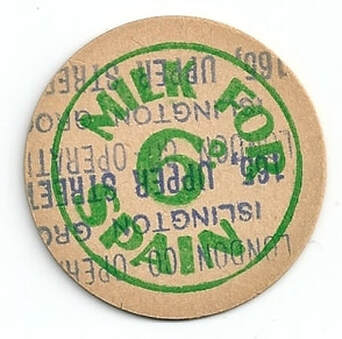 A cardboard token which harks back to one of the more noble chapters in British radicalism. During the Spanish Civil War, supporters of the Republican side raised money to help ease the hardship faced by civilians living in areas largely under siege from Franco's forces.

The Wikipedia article on the 'Milk for Spain' movement recounts: In November 1937 a Milk for Spain fund was opened after an appeal to the various co-operative societies and Labour Party branches around the country. The response was overwhelming. The London Co-op raised £877 alone. In addition to large contributions from societies, anybody who shopped at a Co-op store was able to buy milk tokens; the proceeds of which would go to the Republican civilians. In particular, the milk was directed at children of under four years old and invalids.

Alexander Baron, in his Islington novel Rosie Hogarth, wrote of the generosity of local support for the Republican cause in the Spanish Civil War as 'one of those blind and beautiful upsurges of human solidarity that sweep their class from time to time'. This is a wonderfully evocative emblem of that time, place and movement.
​

United for a Reform of Parliament​

This is a wonderful ha'penny token issued by the radical London Corresponding Society in 1795 - a way of providing change and of course a form of publicity and promotion. It's about the size of an old penny - on one side there's a group of men dressed, it seems, in Roman style, and on the other the dove of peace and the slogan 'UNITED FOR A REFORM OF PARLIAMENT'.

There's a copy in the Science Museum which records that the obverse is based on the fable of the bundle of sticks - one of Aesop's fables the point of which is 'unity in strength'. Here's an abbreviated version:

An old man on the point of death summoned his sons around him to give them some parting advice. He ordered them to bring in a bundle of sticks, and said to his eldest son: “Break it.”
The son strained and strained, but with all his efforts was unable to break the bundle. The other sons also tried, but none succeeded.
“Untie the bundle,” said the father, “and each of you take a stick.” When they had done so, he told them: “Now, break,” and each stick was easily broken.

Achieving a Reform of Parliament

This imposing bronze medal - it's five centimetres in diameter - was struck to mark the Great Reform Act of 1832, the first big step towards the creation of a modern democracy. It show Britannia conferring a charter labelled 'Reform', and Magna Carta and a Bill of Rights, and pays tribute to the leaders of the Whig government - Grey, Brougham, Althorp, Russell - who steered the act on to the statute book.

This is a very constitutionalist medal - the crown appears on one side and Willim IV in profile on the other. It is praising a reforming establishment rather than challenging the political establishment.

The design bears (on both sides!) the name of Wyon, the designer. William Wyon was in 1832 the chief engraver at the Royal Mint, and a prolific designer of medals and the like.

This wonderful ha'penny token from 1794 celebrates the acquittal on charges of high treason of John Horne Tooke. Educated at Eton and Cambridge, Tooke was a radical and was prosecuted for treason at a time when the perceived excesses of French Republicans prompted action against those seen as their sympathisers in Britain.

Tooke was arrested on 16th May 1794 and - with huge symbolism - detained at the Tower of London. But once the case came to trial, a hearing lasting six days, the jury took just eight minutes to clear him.

The token also celebrates the achievements of Thomas Erskine and Vicary Gibbs, the lawyers who secured Tooke's acquittal and also helped to clear others charged with treason at about this time, including Thomas Hardy and John Thelwall. After this series of courtroom setbacks, Pitt the Younger's government stepped back from its policy of repression of political radicals

This token - which is about the size of a two-pence piece - was produced as an expression of political support for Tooke and his ilk, as you can see from the inscription. Privately minted ha'penny tokens were common at this time because of an acute shortage of low denomination coins - though I rather doubt that these particular tokens were used to make routne purchases.

Tooke, by the way, later became the MP for the most notorious of the unreformed 'rotten boroughs', Old Sarum - while Erskine briefly held the post of Lord Chancellor and Gibbs (nicknamed 'Vinegar' Gibbs for his caustic humour) became an MP and Solicitor General.

Thomas Hardy: another acquittal in a treason trial

Another ha'penny token from 1794 marking an acquittal for high treason - this one celebrating the not guilty verdict against Thomas Hardy, a shoemaker and leading figure in the London Corresponding Society. He stood trial alongside Horne Tooke, who is featured in the token above.

These tokens are very similar, though that celebrating Hardy's acquittal is much more worn and not fully legible. On the 'head' side is incribed: 'TRIED FOR HIGH TREASON / T. HARDY / 1794'. The other side appears to read: 'ACQUITTED / BY HIS / JURY. / COUNSEL / HON. T. ERSKINE / GIBBS ESQ' - the same legal team as honoured on Tooke's token.

They make a nice pair!
​

Thomas Spence was among the most idiosyncratic of English radicals. He was an advocate of the common ownership of land. He also was a prolific issuer of ha'penny tokens - not legal tender but widely used because of a shortage of coins - which promoted his radical views.

This token marks Spence's land plan published in 1775 - though it was probably issued in the 1790s. The legend reads: 'Spences glorious plan - is parochial partnership in land  - without private landlordism'. And on the other side: 'This just plan - will produce everlasting peace and happiness - or in fact the millennium'.

This tiny zinc token is the size of a thumbnail, if that - but it hails from perhaps the most successful of political pressure groups.

The Anti Corn Law League campaigned for the repeal of laws which restricted the import of grain and so - the League argued - inflated the price of bread. And in 1846, the year after this token was issued, they were successful. Robert Peel repealed the Corn laws in a move which split the Conservatives - and kept them out of power for twenty years.

This seems to be an admission token for the 'Free Trade Bazaar' at Covent Garden Theatre, intended to raise money for the Anti Corn Law League as well as increasing its profile. The bazaar was a bold intermingling of commerce and politics and was a widely noted and written about event in the spring of 1845.