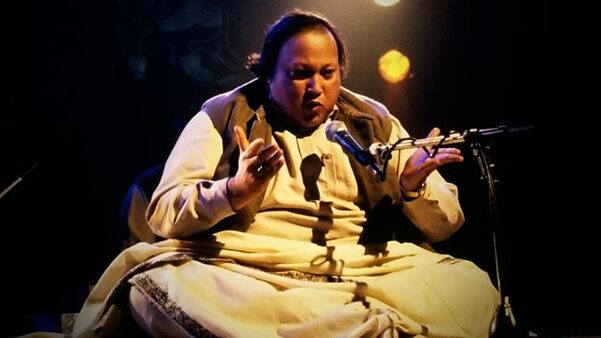 Pakistan's most renowned singer has been visiting India - where he made an impassioned appeal for improved cultural links between the two feuding regional powers. Nusrat Fateh Ali Khan excels in a cultural form - qawwali signing - which is immensely popular in both countries. Andrew Whitehead met Mr Khan and attended his concert in Delhi, and reflects on the common cultural heritage which his music represents:

The moment I walked into the concert hall, I could sense the atmosphere. Not simply anticipation and excitement. There was a raw edge to the emotions of those gathered for a rare performance in the Indian capital by Pakistan's foremost singer. Nostalgia, and a whiff of wistfulness. If only we could have avoided all this enmity between our countries, said my Indian companion, then hearing this wonderful voice could be a regular event, not once in a lifetime.

Nusrat Fateh Ali Khan has been just twice to India to perform in the past fifteen years. But when he does come, he feels very much at home. "I've toured the world as an ambassador of music for Pakistan", he declared in Delhi last week. "But it's only when I'm in India that I feel such peace and happiness."

He may hold a Pakistan passport, but the music Khan sings is part of a common culture - a cord which still binds India and Pakistan.

He's a qawwali singer. That doesn't really do justice to him. He's one of the most accomplished singers in the sub-continent, blessed with a powerful, spiritual, soaring voice. His family has, by all accounts, been singing Sufi Muslim devotional music for centuries - music which has always found an eager audience far beyond the ranks of the faithful.

Sufis are the mystics of the Islamic world. They have saints, shrines - the most revered being in India, at Ajmer. And in sharp contrast to most of their co-religionists, Sufis believe in music and song as a means of reaching God. Not the dirges which pass muster in some faiths as religious music. But powerful, highly-charged, sometimes frenetic songs, which give free rien to a most remarkable voice.

A voice much in demand - Khan has worked on the film scores of 'Dead Man Walking' and the 'Bandit Queen' and is now being sought for Hindi-language movies. Some of his best songs have been shamelessly plagiarised. In one case, what started off as a song of praise to God ended up accompanying a raunchy dance number in a popular Indian film. As a result, just about everyone in Hindi-speaking North India knows Nusrat Fateh Ali Khan's music - even if they don't know the name.

He's now consciously trying to overcome the decades of suspicion  which have soured relations between South Asia's two regional powers. As a Pakistani singer, he braved the wrath of hardline Hindu groups to come to Bombay to record is latest album, made in collaboration with one of India's leading pets.

Music, says Khan, gives people an opportunity to come together. The more cultural interchange there is, he says, the better the relationship: it will diminish hatred.

Pakistani artists such as Nusrat Fateh Ali Khan can come to perform in India - not that many do. The traffic in the other direction is still more restricted. There's no ban on Indian singers or musicians visiting Pakistan. But thinly concealed official disapproval, and formidable bureaucratic obstacles, mean that few take the trouble to do so.

In front of a galaxy of Delhi's great and good, rich and influential, at the concert last week, Nusrat Fateh Ali Khan delivered a few home truths to his government. "I get so much respect when I come here", he said. "Yet artists from here are not invited to Pakistan. I intend to advise our prime minister that she should let Indian performers travel there."

Pakistan's high commissioner - sitting in the front row alongside the American ambassador - smiled broadly, presumably to hide his embarrassment. The rest of the audience applauded enthusiastically.

Then the music began. A song in Punjabi delighted the large number of Sikhs in the audience. Khan is himself a Punjabi - a people cut in two by the partition of India. A rendition of a number now more famous for its bowdlerised movie score namesake turned an already excited audience to fever pitch.

The distinctly stocky Khan, his hair sticky with sweat, plied the bellows of his harmonium by hand, as his manager whispered in his ear the words of the next couplet. His retinue of musicians were quite as spellbinding. Particularly the player of the sarangi - a twenty-four stringed instrument played with a bow, and reputed to be one of the most fiendishly difficult to master. Whatever gyrations Khan's voice performed, the sarangi managed to shadow.

Many must have mused, as they were making their way home, how it has come to be that a man singing what many Indians would regard as their music in their language comes from another country. Forty-nine years after partition, trade and travel between India and Pakistan is minimal. Indian films can't be shown in Pakistani cinemas The two governments are not even on talking terms.

But as Nusrat Fateh Ali Khan declared, and as his music so powerfully demonstrates, the cultures of the two countries cannot be separated.