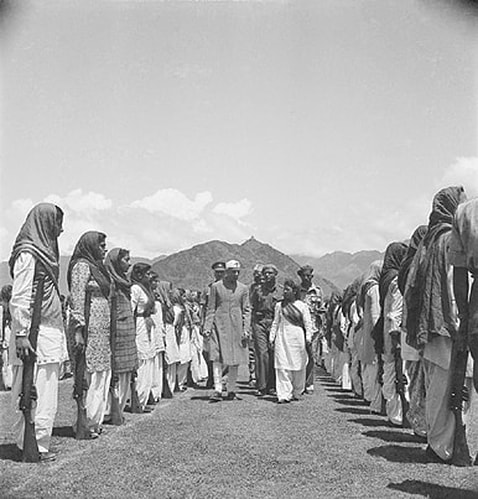 Sixty years ago, the Kashmir valley in the foothills of the Himalayas fell victim to a conflict which remains unresolved. On October 27th 1947 – as Pakistani tribesmen invaded what was then still an independent princely state – the first ever Indian troops were airlifted in to the Kashmiri capital, Srinagar. They have been there ever since in what has become India’s most disaffected state. But the early days of the Kashmir crisis were remarkable also for the establishment of an armed women’s militia intent on defending Srinagar from the attackers – as Andrew Whitehead discovered when he sought to track down the story behind an old photograph:

The photo made me stop in my tracks. It was Kashmir – no doubt about that. The unmistakeable profile of Shankacharya hill in Srinagar pinpointed the location. But what was the moment? Who were those women? Lined up neatly and precisely in military formation, wearing the loose fitting trousers and tunics which are standard women’s wear in Kashmir – most with their heads covered – each with a rifle in her right hand. And inspecting them, a middle-aged man with a Nehru cap – no, it was Nehru, the first prime minister of independent India.

Anywhere in the world sixty years ago, it would be a curious sight – a prime minister in a conflict zone inspecting armed women fighters. In conservative, largely Muslim, Kashmir, it was startling. In the past eighteen years of conflict between separatist militants and Indian security forces, women simply haven’t been involved as combatants. So how could there have been Kashmiri women carrying rifles two generations ago?

The photo was from a cache of glass plate negatives found in the loft of what was once Srinagar’s leading photographers. A fantastic visual archive of mid-twentieth century Kashmir. Beguiling landscapes of this beautiful valley, portrait photographs of the local elite – almost all unlabelled – and a handful of remarkable news shots.

I had uncovered the broad contours of how the Kashmir crisis started largely by talking to those who had lived through it. Personal memories of how one of the world’s enduring geopolitical fault lines first fell prey to violence are a useful antidote to all the partisan histories.

I had heard old-timers speak ruefully of the invasion of the Kashmir valley late in October 1947 by tribesmen from Pakistan’s North West Frontier. The British had pulled out of the sub-continent ten weeks earlier. But mainly Muslim Kashmir was ruled by a Hindu maharaja – it was his decision whether to sign up to India or the new, Muslim nation of Pakistan. The unruly invasion by thousands of Pathan tribesmen, encouraged by some in Pakistan’s leadership, pushed the maharaja towards accession to India. Indian troops were airlifted into Kashmir – they have been there ever since.

And they had local allies. Kashmir’s commanding Muslim politician, Sheikh Abdullah, quickly became the real power there. I had heard tell of the people’s militia he set up to defend Srinagar. And prompted by the photo, I set out to track down veterans of that force.

In middle-class south Delhi, Pran Nath Jalali told me how as a student in Kashmir he had been jailed as a radical, released and then – in the heady days exactly sixty years ago, with an invasion underway and dramatic political change unfolding – he had been appointed the political officer of the new militia. He spoke of parading in a Srinagar park, and hastily organised lessons on using a rifle and throwing a grenade. I showed him the photo of the armed women – he showed me a still more splendid photo, carefully conserved in his wardrobe, of a bigger group with rifles on their shoulders. ‘That was our militia’s women’s contingent’, he explained.

A few days later I was in Faridabad, one of Delhi’s satellite towns, chatting with Krishna Misri. Her brother, Pushkar, had been a militia member, and lost his life serving alongside Indian troops. Her husband had also joined. And in those extraordinary times, women too had enrolled. Krishna had been taught how to drill; she had been trained how to fire a rifle – the first time she was so scared, she told me, that she ran away. But then, she was only thirteen at the time.

I showed her the photos – she could name many of the women, and there towards the front, tall, self-conscious, rifle awkwardly on her shoulder, was her younger sister, Indoo, then eleven. And that, she said, that’s Zuni Gujari, a poor Kashmiri Muslim, a milkseller’s daughter, wearing the traditional Kashmiri pheran or wrap. ‘We were excited, we were thrilled’ – she said. ‘And we were very very afraid’.

The women were armed to defend their homes – and their honour - in case the invaders entered Srinagar. It never got to that. The Pakistani tribesmen reached the perimeter of the city but not beyond. The women never saw active service. But for Krishna – and the three other women veterans I tracked down – this was the defining experience of their lives.

Then as the emergency receded, the men who had once encouraged their wives and daughters to sign up told them the women’s militia was no longer needed. The women largely retreated from public and political life. Every one of the women veterans I spoke to regretted that a window of opportunity had closed so quickly. For a few brief weeks, women’s voices were being heard – their participation valued – and then shaping Kashmir’s future once again became a male preserve. But the old photographs brought smiles, and tears, memories of friends, of solidarity, of empowerment – and quiet pride that when young and vulnerable, they had met crisis with courage.
​