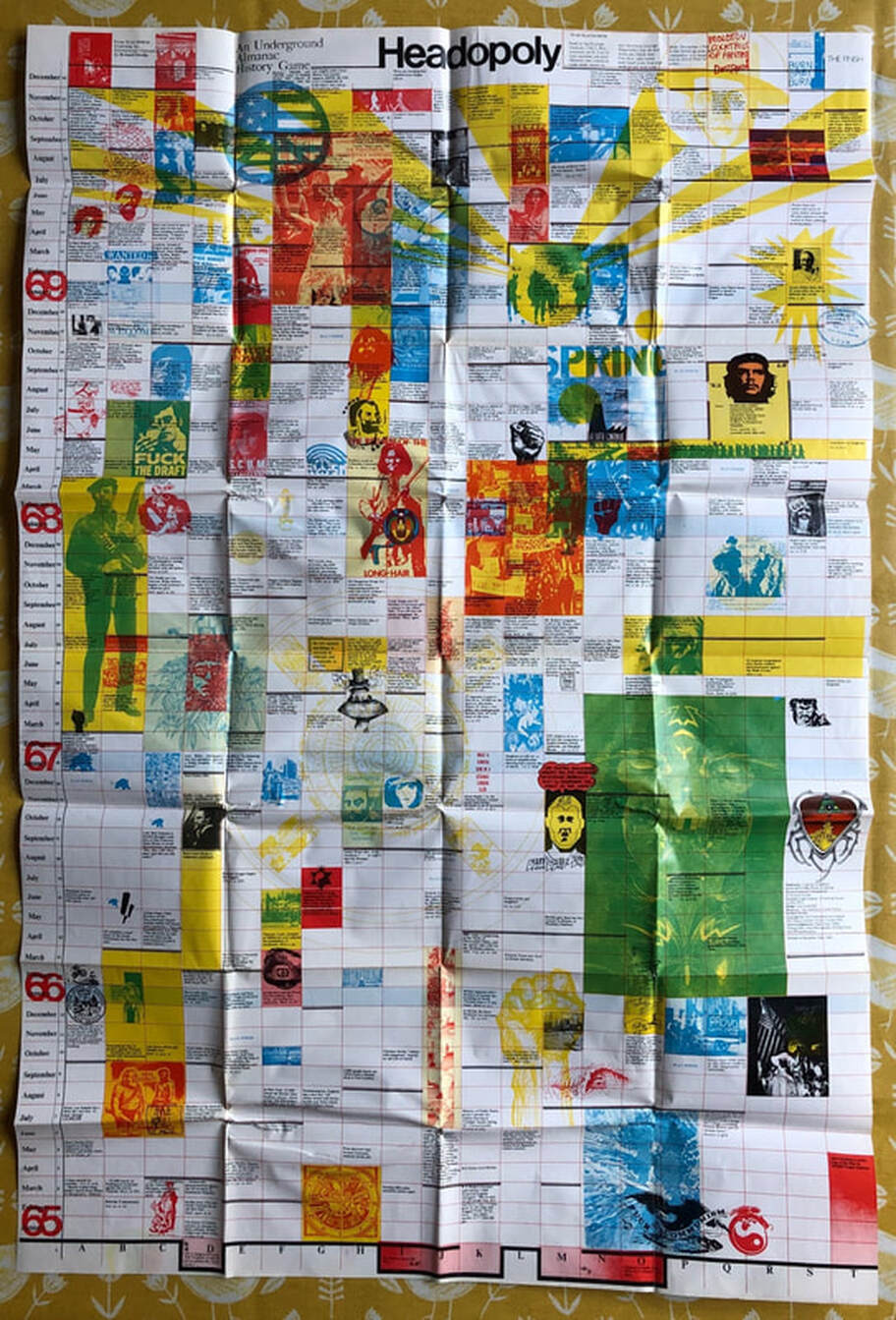 'Headopoly' was a huge fold-out poster which accompanied the hardback edition of Richard Neviile's Playpower when it was published in 1970.

It's a chronicle of the 1960s counter-culture in the form of 'an underground almanac poster-game' which led to the hardback edition being banned in some countries.

Richard Neville was the co-founder of Oz. And the poster was designed by Rolling Stone's Jon Gooldchild.
​Neville told the story in his memoir Hippie Hippie Shake:

'Playpower was rushed into production.  ... All that was left to do now was to complete the artwork for a full-colour poster, to be inserted in each copy. This seemed an innovative way to present a series of significant dates, gleaned from the research. I had contacted Jon Goodchild at his new Rolling Stone office in San Francisco, and he came up with a way to make the poster work as a game as well as a reference tool.

'Jon airfreighted the artwork to London, where it was impounded. A caption contained the phrase ‘Fuck Communism’. I rushed to the airport, bowed and scraped, and somehow convinced the Customs officers that this was a work of scholarship. Which it was. Jon had divided the huge sheet into tiny rectangles, each one representing a month of the year, for the past five years. The game was called Headopoly. Players could traverse the board with counters, aided by instructions in the squares, e.g. August ’69: in Belfast, Bernadette Devlin MP admits throwing petrol bombs at police; miss a Go.

'With a golfball typesetter on the dining-room table, Jim and I updated the board, right up to the final square, 10 December ’69: Senator Edward Kennedy disclosed that in the last four years, over a million civilians had been killed or wounded in Vietnam.

'Felix Dennis came by to assist Jim and me with the fiddly bits of paste-up, flourishing cowgum and scalpels, while Louise took it easy on the bed with a joint, Let It Bleed on the turntable, delighted that this was absolutely the last night of my authorial outpourings. ...
​
'It was three in the morning by the time Headopoly was finished and the lid was back on the cowgum. Felix asked to crash on the floor. At dawn, with everyone still sound asleep, I crept out of the flat into the drizzle, lugging the artwork off to a laboratory run by the Defence Department in a hard-to-find industrial zone. Specialists in aerial reconnaissance maps, they possessed the only camera in England capable of dealing with the complexities of Jon’s design.'
It is indeed a complex design and below it's been split into six segments, A to F. so it can be studied in more detail:
​ 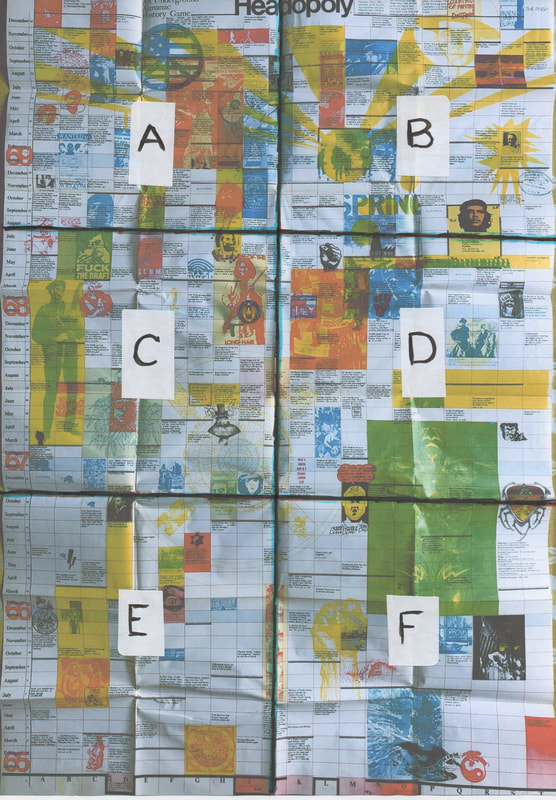 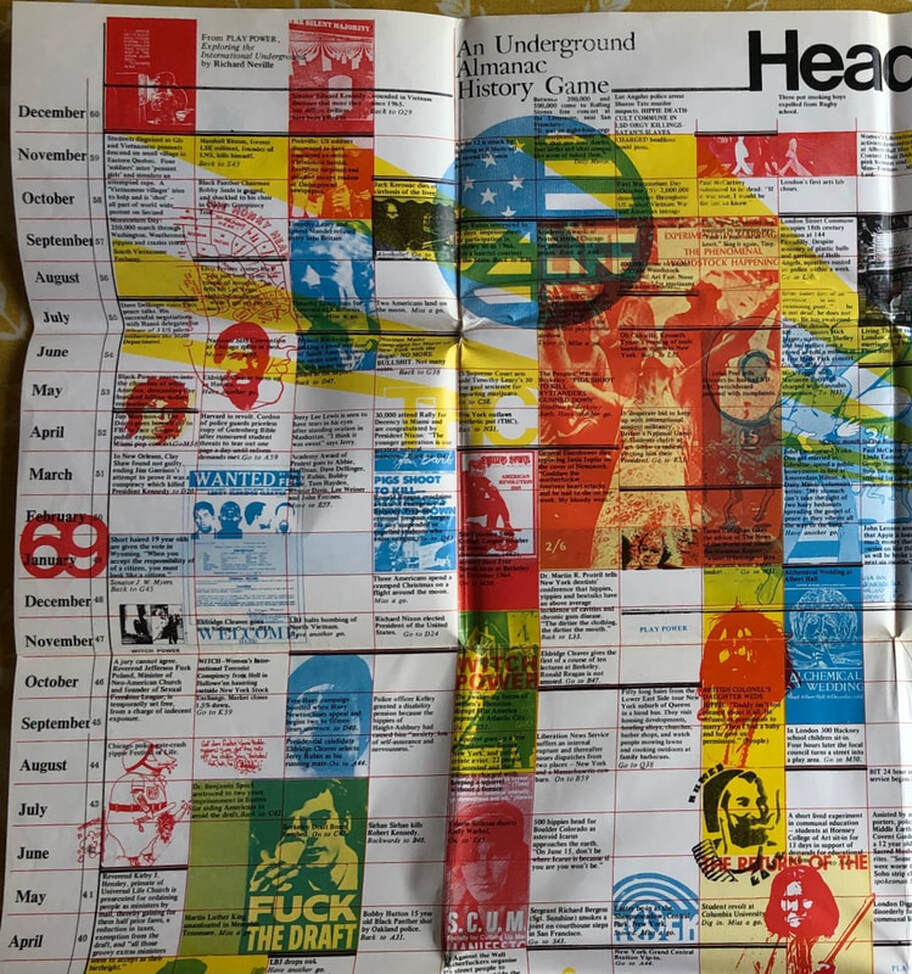 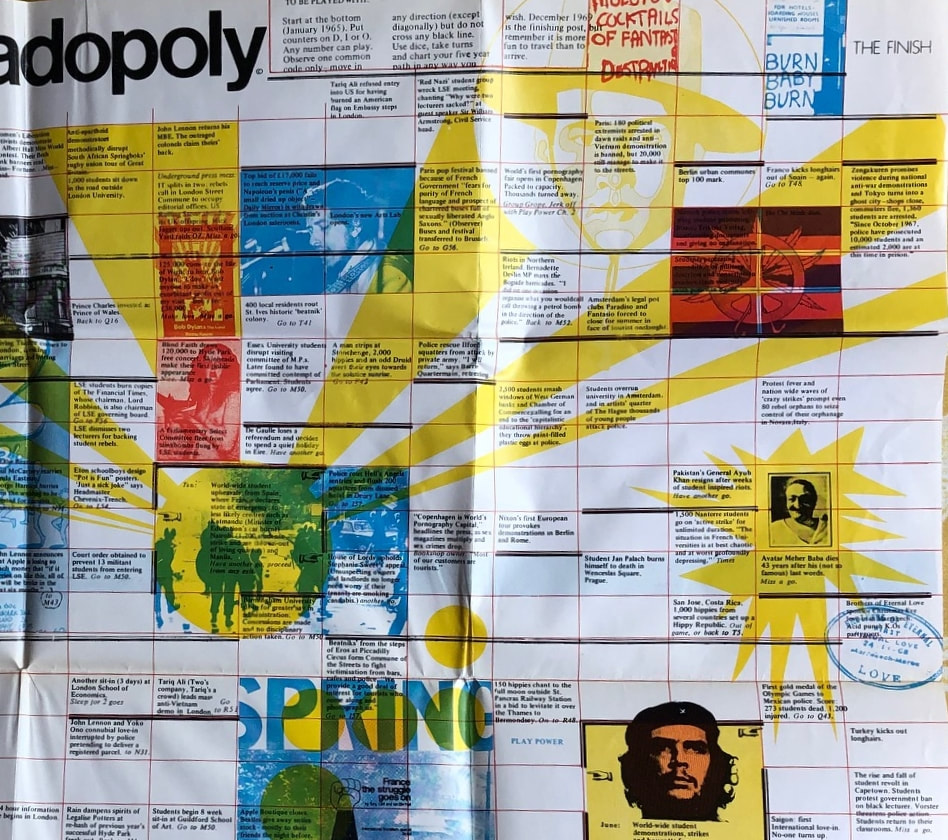 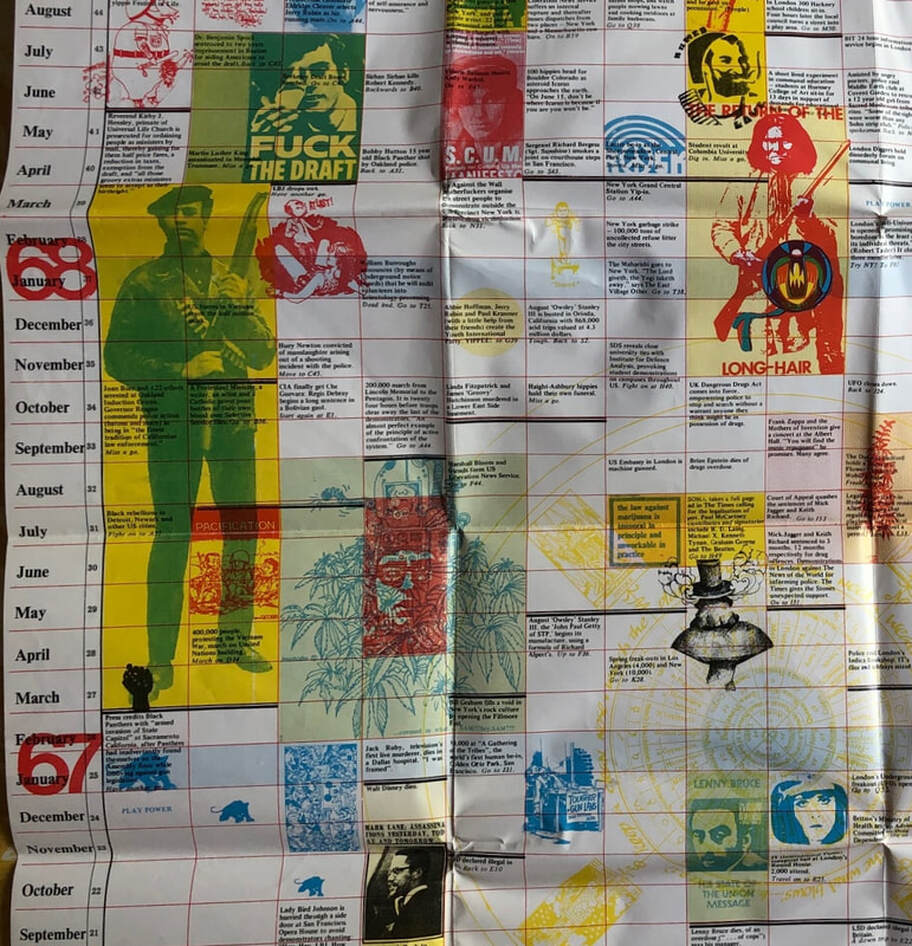 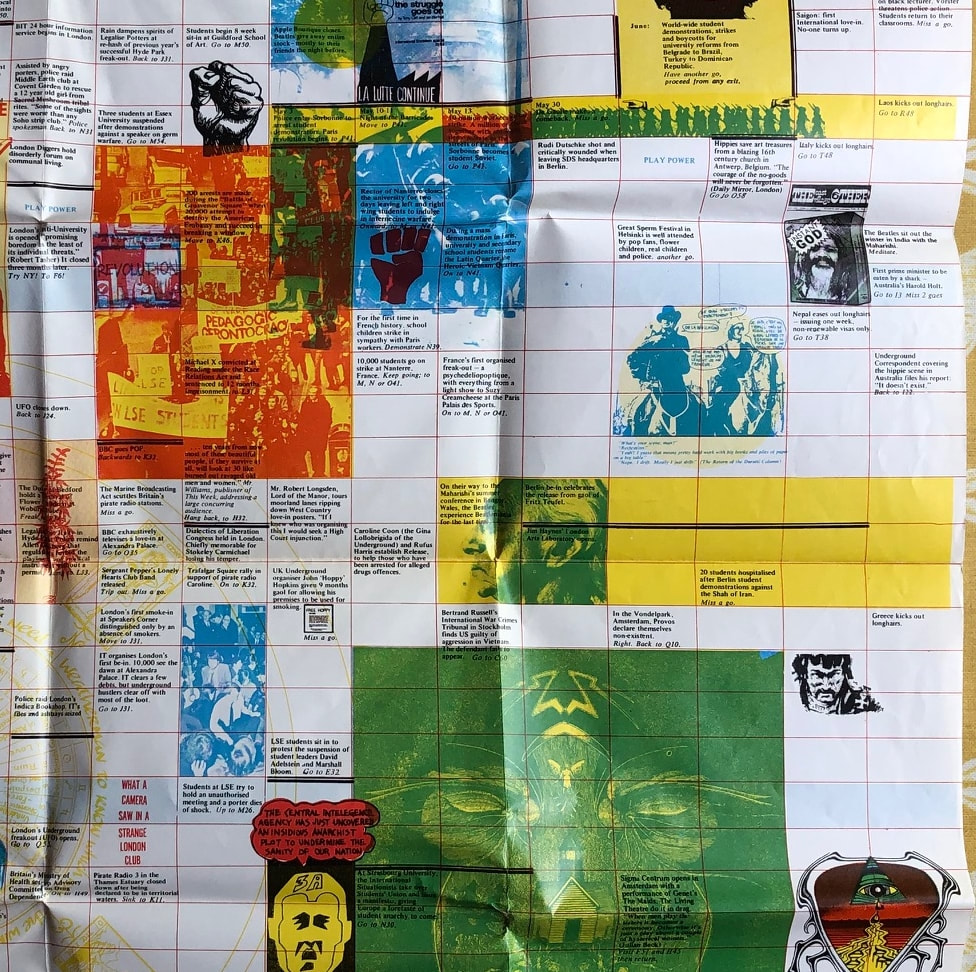 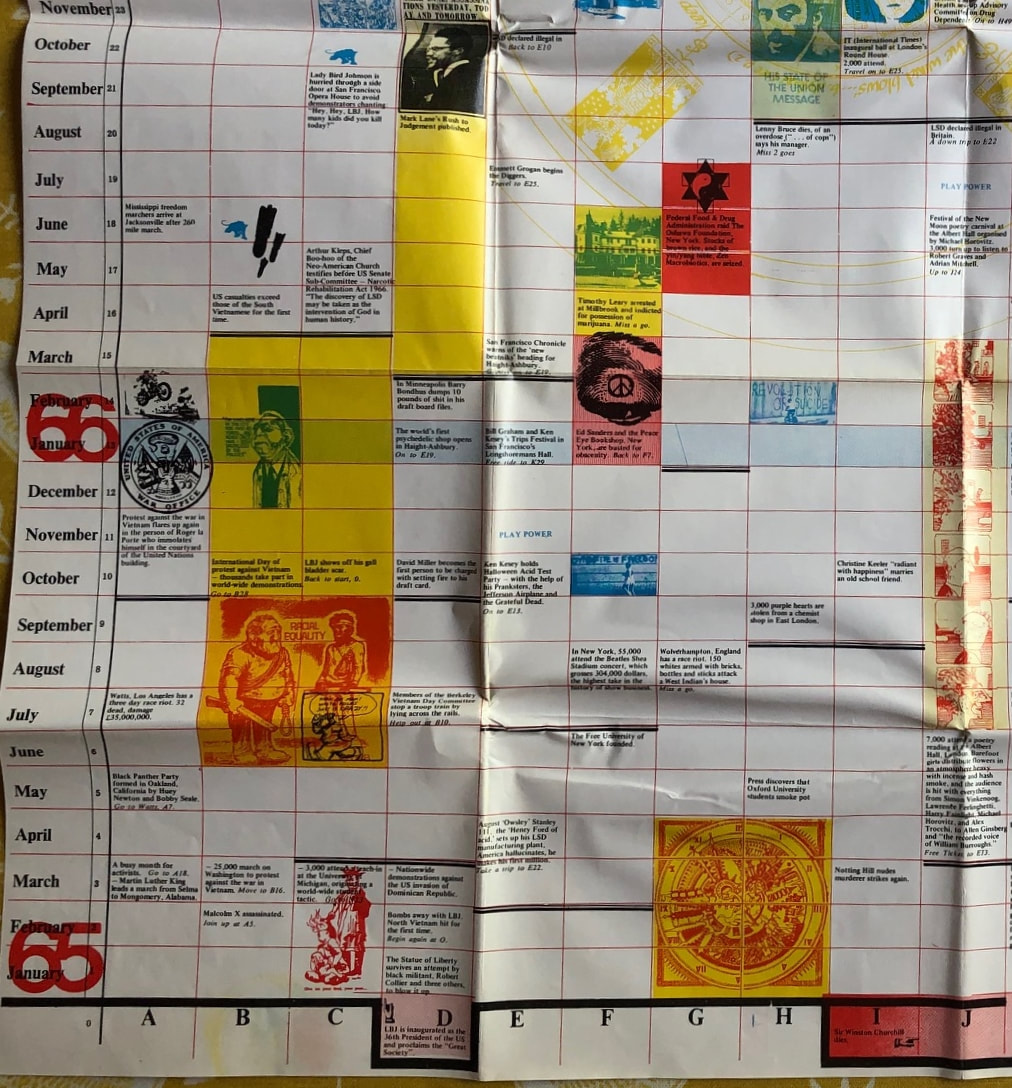 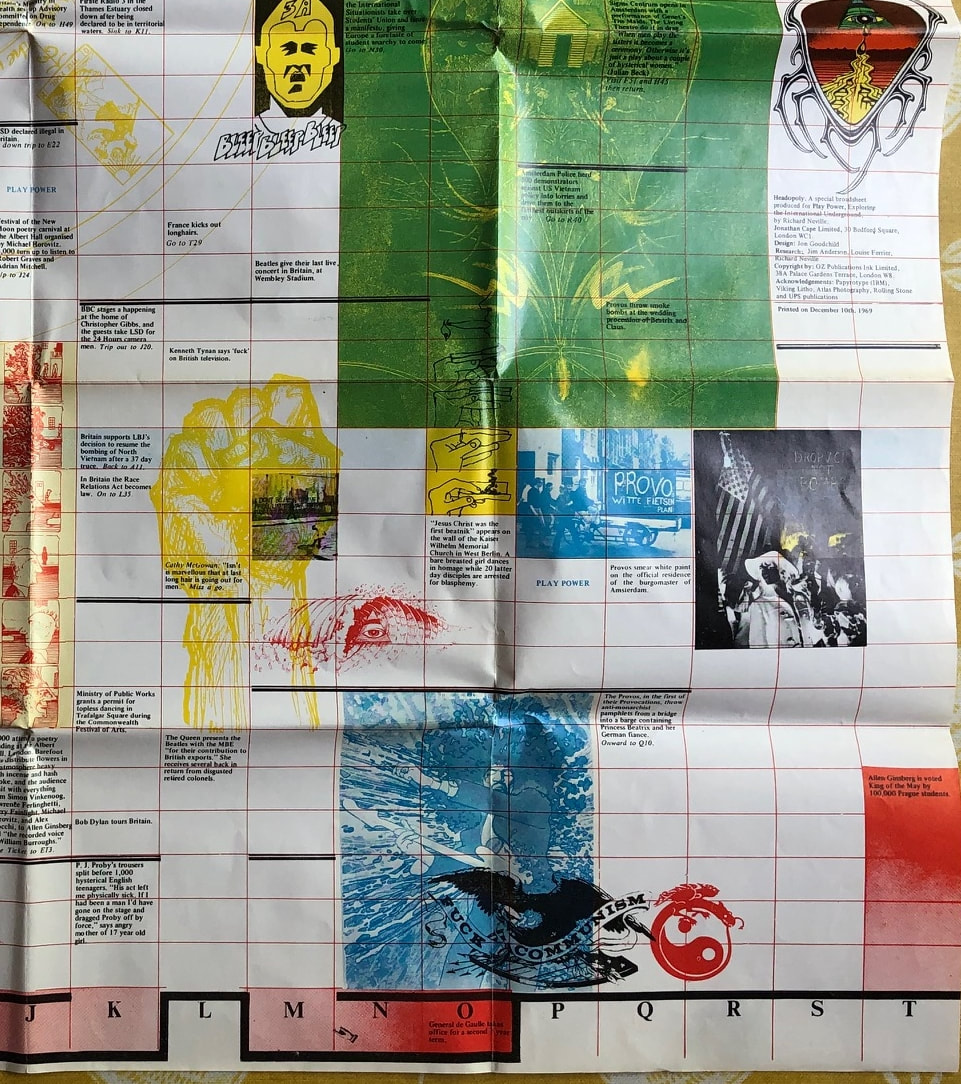