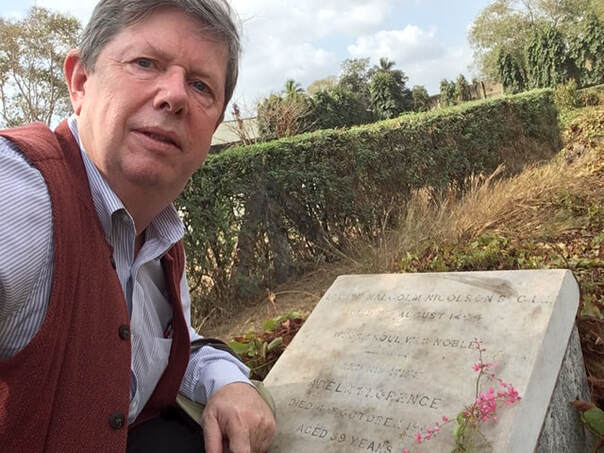 IN: Some of the most extraordinary sights in India are the old, overgrown colonial graveyards where generations of Britons who went out to serve the Empire were laid to rest. In one such burial ground in the southern city of Chennai – Madras, as it was once known - Andrew Whitehead came across the grave of a woman whose story throws an unusual light on the lives of the British in India:

St Mary’s is proud to proclaim itself the oldest Anglican church east of Suez. It stands inside avast fort, built by the British three-hundred-and-seventy years ago to keep out marauders, among whom the most troublesome, as so often, were the French. In a remarkable thread of historical continuity, Fort St George remains the seat of government of the South Indian state of Tamil Nadu and its seventy million people. A couple of minutes stroll from St Mary’s and you’re at the chief minister’s office and the state assembly building.

The church still attracts a respectable Sunday congregation; its monuments and memorials delineate Britain’s first stumbling, not always gentle, encounter with India. The surrounding graveyard quickly became full – the lifespan of Britons in India back then was short. St Mary’s was allocated an overspill burial ground on a desolate spot a couple of miles away called the Island.

It’s there still, sprawling, unkempt, a blasted elegy for Empire – a caretaker does his best to keep the dereliction at bay, but it’s a losing battle. Obelisks, crosses and funeral statuary peep out from the dense undergrowth. Stray dogs howl with anger when disturbed. No one goes there except –tell-tale signs suggest – to gamble, defecate, drink … and have sex.

At the far end of the grounds, just as you wonder whether you dare venture any further, there are two neat, well-tended, fenced-offplots of Commonwealth war graves. And close by, in a no man’s land between the manicured rows of war dead and the tangled mayhemall around, I came across a grave I was looking out for – a small, modest plaque in memory of General Malcolm Nicolson and his wife Adela Florence, who both died in what was then Madras in 1904.

She was one of the most popular poets of the Edwardian era – she wrote of love, longing, suffering and death; and above all of India, with which she had a profound affinity. She at first made out that her poems were translations from Indian languages – and she used a man’s name, Laurence Hope. Some verses of hers, set to music, you may know: ‘Pale hands I loved, Beside the Shalimar’. I remember my father singing those lines to himself.It includes a couplet, addressed to those pale hands:

I would rather have felt you round my throat
Crushing out life; than waving me farewell!

The story of her death is disturbing. Her husband was much older; he needed a prostate operation; it went wrong; the Madras nursing home had run out of oxygen. A few weeks later, his widow – thirty-nine years old and with a four year-old son in the care of relatives in England – took a corrosive poison and after several hours of agony she too died.

The word went out that this poet - so knowledgeable about Indian customs and lore – had committed sati … an ancient, and long outlawed, custom of a wife taking her own life when her husband loses his.

Her sister was also a writer – using the pen name Victoria Cross, she wrote racy novels; her most popular is said to have sold six-million copies. Set in India, it’s about a genteel young English woman who takes her Indian servant as her lover and won’t give him up even when engaged to an eligible, English, colonial administrator. Her lover dies, but she discovers she is expecting his child. She marries her English fiancé and they move away; when the baby is born, she realises that her husband can never abide this living reminder of her Indian lover, so … she suffocates the child.

It’s fiction of course. But it does make you pause.
​
The writings of both sisters challenge some of the conventional assumptions about Empire - about the attitudes and experiences of those Britons who made their lives in India.Colonial graveyards such as St Mary’s are often among the most potent epitaphs of an enterprise which by-and-large history does not judge kindly. But delve under that dense matt of vegetation, and it’s extraordinary what you can find.
​