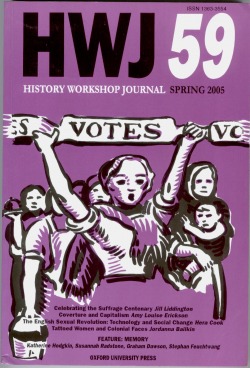 I have been involved with the History Workshop movement in one way or another since the late 1970s, and I am currently an editor of History Workshop Journal. The roots of both the Journal and the onetime movement which nurtured it lie in 'history from below', and the idea that histories need to extend beyond elites and establishments to reflect personal experience and aspiration, and that the writing and study of history is also not an elite practice but should be open to all with an engagement and interest in the past.

History Workshop has a new website - History Workshop Online. Do take a look, the link is here. It's intended to be more accessible and immediate than the Journal. Lorna Richardson is the web manager, and there's a team of editors  supporting her.

The Journal's fantastic and very distinctive cover designs are the work of another of the editors, Bernard Canavan - and they are also incorporated in the site design.

Do you have a 'Radical Object'? Then do write about it for the HWO site.

This site now includes a marvellous section about the history of History Workshop, with fantastic archive material from the years the movement flourished and the full text of its early pamphlets. 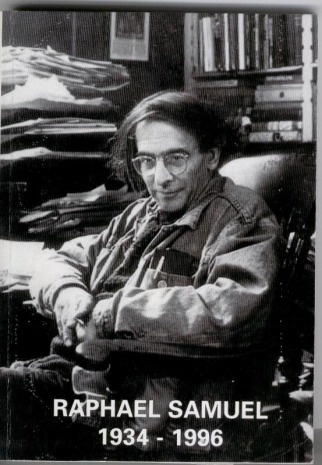 The guiding light of History Workshop was, for many years, Raph Samuel - a charismatic scholar, an effervescent writer and historian, who had a gift for enthusing and inspiring others. He taught at Ruskin College, Oxford.

I started subscribing to History Workshop Journal when an undergraduate, but only came across Raph a little later as a postgraduate at Warwick University. My research into popular politics in late Victorian Clerkenwell chimed with his own areas of research. I remember on our first encounter, in a cafe close to the British Museum, he pointed me towards Gissing's The Nether World, Tommy Jackson's wonderful autobiography Solo Trumpet, and Guy Aldred's indulgent but revelatory corpus of writings about his Clerkenwell boyhood. I was on my way.

At Warwick, I helped set up a Radical History Group. I kept asking Raph to come and talk to us. He always said he would - and even made it up to a social history seminar while I was there - but instead encouraged a wealth of coming and established talent, the likes of Tim Mason and Cath Hall, to catch the train to Coventry.

My first radio documentary was on the East End of Arthur Morrison's A Child of the Jago - the audio is posted below. This was Raph Samuel's territory. He lived in Spitalfields, a stone's throw from what had once been the Jago, a pocket of desperately poor housing which was also tainted as a criminal enclave. And in East End Underworld he had retrieved the personal story of probably the last survivor of that community (the Nichol, to give the Jago its proper name, was demolished in the 1890s, and replaced by the Boundary Street Estate with its glorious bandstand, all still there at the north end of Brick Lane). He was one of the voices in that radio programme, along with the historian Bill Fishman and the politician Stan Newens.

This Radio 4 programme was broadcast in 1985 - Andrew Whitehead was the presenter and John Theocharis the producer. It features the voices of Bill Fishman, Stan Newens and Raph Samuel as well as readings from Arthur Morrison's A Child of the Jago and from the reminiscences of Arthur Harding as told to Raph Samuel and recorded in his East End Underworld.